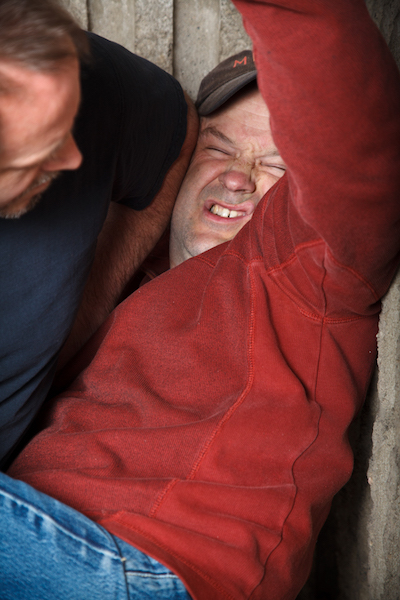 I had completely missed the ippon kumite is in fact a scripted drill. I'm not that bright. But it was a very useful failure. After all, if you're going to fall, try to fall up.

The quest for the most efficient action.

This is my most basic drill. I find it useful and versatile on many levels. At its most basic it is very simple: one partner initiates a move in slow motion and the other partner at equal speed makes one motion to respond. The partners continue this without resetting, winding up wherever they wind up and finding solutions.

Naturally, the details get more complicated.

The flaw in this drill is the artificiality of timing—both slow motion and taking turns. Because of that, the students can and should go all-out with body mechanics and targeting. Perfect alignment and structure so that each strike pushes through the opponent and targeted to the best options. The drill should be done so slowly that the participants can press directly on eyes or throats.

No Training Required with One-Step

One-step can be conducted with people from extremely different systems safely. It is a great way to learn a little bit about how someone new thinks and acts. It requires no training whatsoever—complete novices can often hang with experienced martial artists. Most importantly, it is not dependent on style and there is no rote learning to it.

It allows you to train a student with respect to the student's natural movement and mentality.

It also becomes a tool where the students can begin to think and teach themselves.

The simplicity is that as you initiate a move, your partner is looking for the most efficient thing he can possibly do. As he chooses and acts, you must come up with the most efficient thing you can possibly do with respect to his current position and motion. The "taking turns" is not about letting the other person move but about practicing on a moving, unpredictable target.

Limiting yourself to one motion forces you to find something more efficient.

Note well- each person gets one action. Not one block and one strike. One action. Block-and-strike, even simultaneous block-and-strike are sparring or dueling artifacts. Assaults happen in a flurry of damage. In order to make a simultaneous block and strike work, you would have to be not only twice as fast as the threat but have reactions that were faster than actions. The math doesn't work. It is something we get away with because we have been practicing against feeds, not attacks. This drill will help break that habit.

The Golden Move: A single motion that protects you from damage, damages the threat, improves your position and worsens the threat's position.

Simply running away can do three out of four, and that isn't bad.

It is crucial to impress on the students that the One-Step is not fighting. Like most drills, it lacks the fear and pain that make fighting what fighting is. There is no test of heart in the drill and fighting is very much about determination and all those other things we call "heart."

Its purpose is to continuously move more efficiently. To find the smallest, fastest option that will get you what you want. A right hook may get the threat down (and may get your hand broken) but sometimes a two-inch popping movement with your knee can put him down as well, faster, more reliably and more safely. But you can only do it if you see the opportunity.

In the end, this drill is about learning to see.

The above excerpt is from Training for Sudden Violence: 72 Practical Drills by Rory Miller, Author of Facing Violence and Meditations on Violence.