The Art and Science of Staff Fighting | YMAA
Skip to main content
FREE Shipping Order Over $70. (US Only, Conditions apply)    |   Up to 40% Off. Exclusions apply.

Home >> Articles >> The Art and Science of Staff Fighting 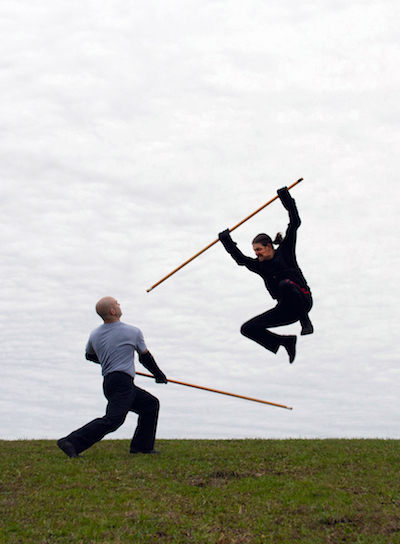 The Art and Science of Staff Fighting

The staff, or bo, is one of the most common weapons in the martial arts.  Many karate schools include bo forms in their curriculum. I am here with Master Joe Varady, martial artist and weapons specialist, to talk about the staff.

Interviewer: So, what exactly is staff fighting?
Varaday: It is an exciting combat art, similar in some ways to Olympic fencing.  Two opponents square off with long sticks, sometimes padded and sometimes not. Picture that classic scene where Robin Hood fights Little John.  The basic objective is simply hit but don't get hit, but at a deeper level, it is a game of physical chess, with the aim of out witting and outmaneuvering your opponent.  At their most refined levels of practice, however, all combat arts transcend the opponent and become paths of self-discovery and self-expression.

How did you first get introduced to staff fighting?
It would seem that I have always had an affinity for the staff.  When I was about 10 years old, I watched a staff-wielding hero in a Saturday afternoon kung fu film.  Inspired by what I had just seen, I unscrewed my grandmother's broomstick from the head and snuck out into her back yard to try some of those amazing moves.  I probably remember the event so vividly because I can also remember having to explain to my grandmother soon afterwards how her broomstick got cracked.  Despite a mild scolding, after that, never a broom, rake, or mop was safe, because I loved twirling the staff.  Of course, I didn't know how to fight with it yet.  That came later.

What experience or credentials do you have that would make you an expert to write a book on staff fighting?
As far as the martial arts, I have been training continuously for over three decades.  I hold a sixth degree black belt in my core style of Cuong Nhu Oriental Martial Arts.  I have cross-trained in other eastern martial arts such as karate, kung fu, tae kwon do, judo, jujitsu, wing chun, and eskrima.  I have studied various western martial arts as well, including boxing, fencing, long sword, sword and shield, and various methods of armored fighting.

I feel that all this has given me a unique perspective on the martial arts as a whole.  In 2014, I competed in the world stick fighting championships in Hungary where I took home a 2nd in full contact staff fighting and a 4th in full contact double stick.  Aside from the martial arts, I have a Masters degree in education and spent a decade as a classroom instructor.  I've already written six training manuals for Cuong Nhu, including two especially designed for kids. Combine these many experiences with the fact that I simply like to research and write about my interests, and the result is The Art and Science of Staff Fighting.

Do you have a school?
I currently run two programs: traditional martial arts through Satori Dojo and an eclectic weapons systems through Modern Gladiatorial Arts, both located in Phoenixville, PA. I am also the current president of the Universal Systems of Martial Arts Organization, an active fellowship that provides practioners of different styles of martial arts with an open forum for sharing techniques and principles.

Who does staff fighting?
A better question might be, who should practice staff fighting?  Many martial artists practice forms, or kata, with the staff.   While these routines are great exercises and can teach many things, twirling and striking to the air unfortunately does not translate easily to application against a non-compliant opponent.  It is like trying to spar using only the moves from your empty hand kata; the two don't always match up the way we envision they should.  I have found that very few people who practice the staff have actually tried to employ their staff skills in combat.

That sounds like it would hurt.  Do you wear some sort of protective equipment?
While you may get banged up occasionally, injuries are usually minor.  Most of the time we spar with padded staves and wear minimal protective equipment, such as a fencing mask and padded gloves.  Of course, when we fight full contact with unpadded staves, the armor component has to be considerably higher.

Is the staff a practical self-defense weapon?
I would say that it is.  The reality, however, is that you will probably not have a traditional staff handy when you need it most. Luckily, our environment is usually full of improvised weapons; you just need to learn how to recognize them. Staff fighting techniques can be effectively applied in a self-defense situation using a walking stick, curtain rod, floor lamp, hockey stick, fallen tree branch, broom, etc. Basically, anything over three feet long with some rigidity serves nicely as a staff.

What are the advantages does the staff hold over other weapons?
The most important advantage over most other weapons is the staff's superior reach. Being able to strike or otherwise engage an opponent without them being able to strike you back puts you at a distinct advantage, one that is especially important if your attacker happens to be armed with an edged weapon. Therefore, studying staff fighting techniques should be an important part of any well-rounded martial arts curriculum.

Do you have a favorite staff-fighting story?
In 2008, I was training western combat arts at Live Steel Fight Academy.  That year, they decided that, rather than hosting their annual tournament in the traditional bracket format, the tournament that year would consist only of challenge matches and, at the end of the day, all the fighters themselves would vote on the winners. Awards were given for things like "Most Courageous Challenge," "Best Fight Of the Day," "Biggest Upset," and the coveted title "Best Overall Fighter."

One of the instructors, Joe McGlaughlin, challenged me to a staff match, as did two of my classmates. Since everyone knew the staff was my weapon, they were probably looking to use me to win "Biggest Upset" or "Most Courageous Challenge," but I thought quickly and tried to turn things around on them. I told my two classmates I would accept their challenges, but only if I could take them both on at the same time, to which they readily agreed.  When it came to my teacher, Joe, I told him I would accept his challenge, but under the terms that I would start unarmed, take his staff from him, at which point the match would be stopped, he would be given another staff, and then we would continue. I can still hear his reply, "I'd like to see that."

Now, the only problem was that I had never disarmed anyone with a staff before! But, my mouth had just written a big check that my butt was going to have to cash, so I started training right away. In addition to being a student at Live Steel, I also run my own martial arts school. I still had several weeks before the tourney, and I wasn't going to waste it. Every chance I had, I was giving one of my students a staff and saying, "Attack me!" They almost always used the same, habitual method of attack, a downward strike from the right.  Pretty soon, I had a few reliable techniques worked out and was thinking I might actually pull this off.

When my match with Joe came up, he had his staff, and I stood before him empty-handed, just out of his range, poised on the balls of my feet, ready to go.  The tension in the room was so thick you could have heard a pin drop.  No one breathed. Up until now, I was careful to make sure that no one from Live Steel had seen me do my disarm trick, so Joe would be unprepared. Heck, no one knew what to expect, especially me.  I had my plan, but Joe was an excellent fighter, and I knew this could turn bad very quickly.

Suddenly the referee snapped, "GO!" After reviewing the video, I could see that he hesitated for only the briefest of moments, but at the time it seemed to me an eternity. There was the realization that he wasn't moving yet, I sprung forward, grasped his staff, and everyone in the room heard him utter, "Oh No!" just before I spun and threw him to the ground.  I stayed cool as I helped him up and we rearmed, but inside my head I was doing my happy dance.  I had gotten very lucky, and I knew it.  I took home "Best Overall Fighter" that day.

What would you consider your biggest fight?
My biggest fight was in 2014 when I had the honor of fighting on the U.S. team at the "World Eskrima Kali Arnis Federation World Championships" (WEKAF) in Hungary.  While eskrima is typically known for its full-contact short stick fighting, WEKAF now features full contact staff fighting as well.  I took the silver after losing a close split decision Guro Perry Zmugg from Austria.  It was a really close fight, but, hey, you can't win them all.  Six months later, I invited Guro Perry to come to America, stay at my house, and teach some classes at my dojo.  I am happy to say that we're now good friends, and that's really what the martial arts is all about.

So how would I start staff fighting if I was interested?
The best way would be to find a qualified staff instructor.  Again, even with styles that practice staff forms and their applications, the problem is that there is too little testing being done, even in light sparring situations.  Without a teacher, it takes a long time to figure out even the basics.  I refer you to The Art and Science of Staff Fighting where you will find the best of Eastern and Western traditions (along with a few in between), unified seamlessly to create a logical, compact, and style-independent system of staff fighting that is easy to learn and applicable to any practitioner from any style.  The information is divided into nine progressive levels, with detailed training guides designed to progressively challenge you. I also include guides on how to create your own home training equipment to get the most out of your staff training.  It really is a complete instructional guide, equally valuable to both novices and advanced practioners alike.