Evaluating Drills—Part 1 | YMAA
Skip to main content
FREE Shipping Order Over $70. (US Only, Conditions apply)    |   Up to 20% Off. Exclusions apply. 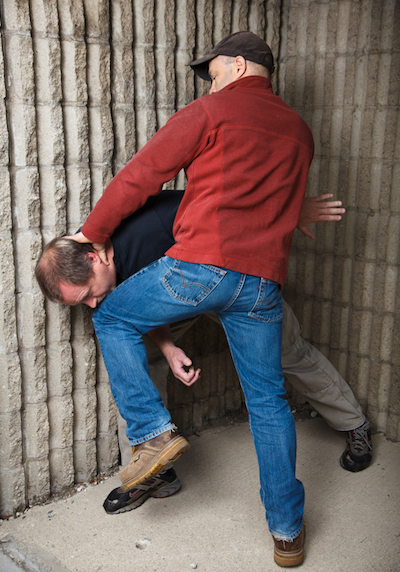 I'm not a big fan of most drills. There is a fine line, but conditioned reflexes are crucial in a fight and habits will get you killed. Conditioned reflexes are things you do without thinking about it. They are essentially trained flinch responses. If something suddenly comes at your eyes you WILL do something: block, move your head or, at the very minimum, blink.

I'm not a big fan of most drills. There is a fine line, but conditioned reflexes are crucial in a fight and habits will get you killed.

Conditioned reflexes are things you do without thinking about it. They are essentially trained flinch responses. If something suddenly comes at your eyes you WILL do something: block, move your head or, at the very minimum, blink. The more you train, the more sophisticated the conditioned reflex can become.

Habits are also things you do without thinking. Ways of moving. Ways of approaching problems, and even ways of thinking and seeing. Habits can be ways of thinking without thinking. If you always problem solve by breaking things down into bite-sized pieces, something that began as a strategy becomes a habit and the second it becomes a habit you forget to look at other ways.

Habits are especially pernicious in self-defense training. In the end, a martial artist is training to break another human being. The essence of martial arts is the manufacture of corpses and cripples. In every drill designed to break a bone if no bone breaks, there is something wrong with the drill. Something deliberately flawed to make the drill safe. You must recognize the flaw. Because with every repetition you are instilling the flaw along with the technique.

Do you pull your punches? Then missing has become a habit. Do you use three- move defenses against single-move attacks? If so, congratulations. You are well trained to beat someone who is only a third of your speed.

When you analyze any force-on-force drill (any drill where you are simulating attacking or being attacked) you first have to examine why no one is being crippled or killed. Not merely hurt, because people are lazy and cunning and will decide that pain is "close enough" and use it as an excuse to look no deeper. Crippled or killed.

Most likely it will be one of four things (these, of course, are the four elements that need to be done properly to cripple or kill):

1) Power generation is absent. Sometimes called "powder-puffing" it is often a form of pulling with light contact. But there is another way, too, where the "chain of power" is deliberately broken. Power comes, in the end, from your feet. If you were floating weightless and struck someone, only half the power would transmit to his body.

The other half would push you away as well . . . and any power that went to moving his body would also be lost, not contributing to damage.

The power chain in a hand strike comes from the feet, then up the leg bones to the pelvis, spine, and shoulder and out the arm bones to the hands. That probably sounds esoteric. Hit a heavy bag as hard as you can. Pay attention to where your feet, hips, spine, shoulder and arms are at the instant of impact.

2) Targeting. If you do not use valid targets in training, you are practicing missing. Whether it is pulling strikes or using a worthless target near a good one (such as simulating eye pokes on the forehead or groin strikes on the thigh) it doesn't matter. Missing becomes a habit.

3) The third possibility, ranging, disrupts both targeting and the fourth element, timing. You cannot hit something that you cannot reach. When you practice from a distance that a bad guy will not choose (remember he wants to hurt you decisively early, so he will be close) you not only hamper your ability to do harm but throw off your own senses of safety, distance and timing.

Defensively, working out of range gives you more time than you will have in a real assault. Because you are safe, it lacks the intensity of the real thing. Years of practicing against feeds leaves the practitioner totally unprepared for attacks.

4) Timing. This is the flaw that I incorporate most often, because I have never seen anyone go slow motion in a real fight. Not move at all, completely frozen? Yes. I've seen that, but not slow motion.

It is still a serious flaw because it may set the expectation that there will be time to think.

Safety is not the only cause of flaws that creep into the drill. People want to win, they want to be dominant, especially if they are teaching, and they want the techniques to work.

So in slow motion drills, one speeds up so that he can win. Or the technique is taught against a slow thrust from too far away, giving the defender enough time to do the technique.

When Bo and I were going for our mokuroku certificates, our kata had gone through a progression until we were practicing full force and speed with boken. We were told explicitly that to do it any other way would give tori bad timing and bad skills. It was dangerous, but very good training.

I was asked to be uke for a mokuroku test at another school. Same system, different instructor. First practice night I attacked the way I had been taught . . . and clocked the mokuroky candidate upside the head. The head sensei took me aside and chewed me out. He said, "At your rank, you should know that it is uke's responsibility to make tori look good. You need to slow down and be sure to fall big. I don't care if he misses completely. Making him look good is tori's job."

At my rank in my school, uke's job was to give the most realistic attack possible.

Most damning is when the student must be taught, even brain washed, for the techniques to work. We've all seen students throwing themselves. We've seen, in real life or in parody, instructors who insist on one type of attack, the type of attack that their defenses work against. Here are the clues to look for:

1) If the uke (I'll use that term for "demonstration dummy" in this context) must be told what will happen, being told is likely part of the technique. People are largely suggestible and if someone with sufficient authority tells you that slap at point X will cause the arm to go numb or a temporary loss of consciousness, many people will experience it. Strangely enough, it often doesn't work without the explanation, and that's something you can test.

So, to recap: When examining a drill, first look for the safety flaw. Then ask yourself: If the attack came at full speed and intensity, would my response work? Does it require me to have super speed or to block a full power thrust with a thumb?

Then the third question: If I were a criminal and not stupid, would I ever do an attack this way?

That's important. Unless you plan on getting into duels, you will be attacked by a criminal, not a competitor. This is what the criminal does as a job. And he does it to maximize his safety, which means he will minimize your chances.

Enraged people do attack stupidly, and there is value in working defenses to rage attacks. Definitely practice for that . . . but if you look at an attack and just can't see a bad guy doing it, you're probably wasting your time.

The fourth question: Is this going to get me killed?

Not too long ago I was practicing hubud, a Filipino drill with an advanced practitioner. Knife comes in, check, slash the arm, transition maintaining the check, slash at him . . .

He got irate, "You have to let my weapon hand go when it is my turn. That is how the drill works!"

"But that would be stupid."

The above is an excerpt from Training for Sudden Violence 72 Practical Drills by Rory Miller.