The Hidden Roots of Karate and Jujitsu | YMAA
Skip to main content
FREE Shipping Order Over $70. (US Only, Conditions apply)    |   Up to 20% Off. Exclusions apply.

Home >> Articles >> The Hidden Roots of Karate and Jujitsu 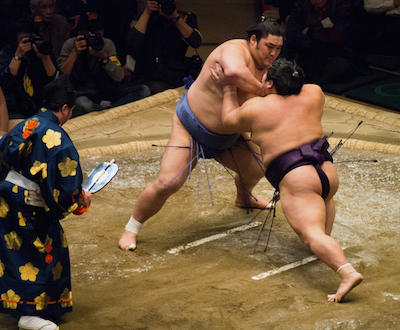 The Hidden Roots of Karate and Jujitsu

This article will discuss several martial arts to illustrate how different looking martial arts are apparently closely related and how the idea of hidden historical roots applies to many martial arts. First the origins of karate and Okinawan sumo will be explored. Then the root of jujitsu will be uncovered.

This article will discuss several martial arts to illustrate how different looking martial arts are apparently closely related and how the idea of hidden historical roots applies to many martial arts. First the origins of karate and Okinawan sumo will be explored. Then the root of jujitsu will be uncovered. These overlooked origins exist in many martial arts and just a few of them will be looked at. After reading this article you may be inspired to research the martial art you are currently training in to see what hidden treasures you can discover.

Tegumi: The System that helped create Karate and Okinawan Sumo

Okinawa, the main island of the Ryukyu Islands chain which expands from Japan to Taiwan, is situated close to many other parts of Asia. This island became the Okinawa Prefecture of Japan in 1879. It is located about 300 miles from the southernmost tip of the Japanese mainland, 300 nautical miles north of Taiwan, and 400 nautical miles east of China. Okinawa's unique geographic location created an incredible melting pot of Asian cultures that began hundreds of years ago from seafaring trade with its Asian neighbors. This mixture of cultures also included the martial arts. The indigenous martial arts of Okinawa combined with foreign martial arts created Okinawa's best known export, karate.

Tegumi is the folk-wrestling style of Okinawa and it was probably the original form of martial arts in Okinawa. Tegumi's origins in Okinawa are surrounded by myth with no reliable historical documentation. Tegumi evolved into a grappling match that was won by submission: joint locks, strangles or pinning. Eventually, tegumi branched off into two directions: the self-defense version, which is karate, and the sport version, which is Okinawan sumo.

In Okinawa, karate master and pioneer Funakoshi Gichin in his youth engaged in sumo-like wrestling called tegumi, which he recounts in his book Karate-Do, My Way of Life. Funakoshi mentioned in his book that he cannot be sure how much tegumi helped his karate mastery, but it definitely did have a positive impact. His tegumi training helped him gain muscular strength, which is very beneficial in karate. Also, Funakoshi is certain that tegumi assisted in fortifying his will, an attribute every martial artist needs (Funakoshi, 1975: 122-124).

Tegumi is historically very closely related to karate. Many Okinawan karate masters also practiced tegumi. Tegumi uses the same two Chinese characters that are used in writing karate's kumite, except that are they reversed. "Te" literally means "hand" while "kumi" or "gumi" literally means "grappling." Kumite is the part of karate were a person trains against an opponent, utilizing the techniques acquired in kihon (basic drills) and kata (forms).

When tegumi is used for self-defense, with the added use of the Chinese striking and blocking techniques, tegumi becomes karate. This is where the mixture of cultures comes into play. The indigenous martial arts of Okinawa, tegumi, were combined with the foreign martial arts of China. This created Okinawa's best known export, karate. Because karate was simplified for the curriculum in the Okinawan public school system at the beginning of the 20th century, most of the tegumi grappling elements (throws, holds, locks and chokes) were removed from karate. Interestingly enough, the tegumi grappling elements are hidden in many karate kata. However, there are a small number of karate masters who have passed on the tegumi in karate to future generations of martial artists. So, fortunately the tegumi in karate is not completely lost. As an interesting side note, when karate was introduced to mainland Japan, some jujitsu experts began adding jujitsu grappling techniques to karate as the version of karate they learned did not contain much grappling.

Tegumi also became a sport, Okinawan sumo. Okinawan sumo is still done today and has formal rules for how the matches are conducted. Okinawan sumo players usually wear shorts with a thick cloth belt tied around the waist. Sometimes they wear a judo gi, with a belt. Okinawan sumo differs technically from Edo sumo in that the Okinawa style match is not won after making your opponent leave the ring or touch the ground beyond the soles of his feet, as in Edo sumo. [Sumo of mainland Japan essentially took its present style in the Edo period (1603-1867 AD). This form of sumo is sometimes called Edo sumo when compared to Okinawan sumo, but generally Edo sumo is commonly referred to as just sumo.]

The Okinawan sumo style match is won after you pin your opponent's back to the ground while inside the ring. This pinning is similar to judo and jujitsu and requires a high level of grappling ability on the ground unlike the size and strength usually needed in Edo sumo. Also Okinawan sumo is practiced in a less organized informal way as compared to the extravagant tournaments held in professional Edo sumo. Many Okinawan martial artists have studied both Okinawan sumo and karate. These hidden technical and historical links between tegumi, Okinawan sumo and karate parallel the similar links between Edo sumo and jujitsu that are discussed below. (Goodin, 1999)

Sumo: The Root of Jujitsu

According to old Japanese history, sumo wrestling predates jujitsu by many centuries (Gracie & Danaher, 2003: 8-11). Sumo goes back about 1500 years, while jujitsu didn't really get recognized until about 500 years ago. Considering that sumo was part of the Japanese culture for many centuries before the refined unarmed techniques of jujitsu came about, it would be logical to think that sumo had a strong influence in the eventual development of jujitsu. Arguably sumo can be considered the first codified form of jujitsu. Even today, many martial artists do not know that sumo is the root of jujitsu. In fact, samurai used sumo as a training routine first and jujitsu evolved from that training routine.

Many of the kimarite, sumo's winning moves, are similar to modern-day jujitsu and judo techniques. They also have similar names. Sumo's one-arm shoulder throw, ipponzeoi, has a counterpart in jujitsu's full shoulder throw called ippon seoi nage. Sumo's koshinage, a hip throw, is similar to jujitsu's o-goshi or full hip throw, and the same goes for sotogake, sumo's outside leg trip, and jujitsu's kosoto-gake, or small outer hook. Sumo can be seen as one of the oldest and most primal and forceful of the Japanese martial arts. So, it is not hard to see why we may view sumo as the root of jujitsu. Some other martial arts, such as judo, aikido and Brazilian jiu-jitsu are all modern day forms of jujitsu, each having different objectives and associated techniques that have changed over time to coincide with those objectives.

A fascinating link between Funakoshi's karate and sumo of mainland Japan is the following: When Funakoshi Gichin was spreading karate throughout Japan: "Several gigantic sumo champions also sought instruction (although punching and kicking were not allowed in sumo, open-hand attacks were, and the wrestlers wanted to learn how to make more effective thrusts), which pleased the diminutive Funakoshi immensely." (Stevens, 1995: 69). Funakoshi was a very small man, so the fact that gigantic sumo champions were asking for his help with open-hand attacks, most likely made Funakoshi very proud of his karate mastery. It is indeed a small world and the influence that one martial art can have on another can be profound.

(Some material in this article is drawn upon from the book Sumo for Mixed Martial Arts: Winning Clinches, Takedowns, and Tactics by Andrew Zerling—YMAA, Oct. 2016)