Home >> Articles >> What is Staff Fighting? 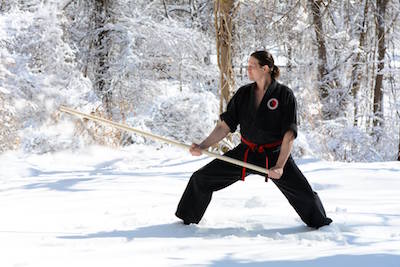 What is Staff Fighting?

The staff has been a common weapon among the many cultures of Earth since ancient times. Over the ages, humans have used this basic weapon for self-defense and for contest.

Fighting with the quarterstaff was once so popular that it was included in the Boy Scout Handbook, but it has since fallen out of fashion among combat martial arts. While the Eskrimadors of the Philippines have done much in the last several decades to promote combat arts with the short stick worldwide, little has been done to preserve and progress the art of fighting with the long stick, or staff.

Today, "top practitioners" of the staff are often veterans of the karate tournament circuit, performing incredible twirls with foil covered balsa wood staves, throwing in flips and full splits for dramatic effect. While I appreciate these practitioners for their tremendous physical prowess and dazzling artistry, these performances are more art than martial.

Tracing these contemporary staff forms back in time, we find their roots in much less extravagant, more traditional, Asian staff forms. In fact, Eastern forms evolved originally from prearranged drills undoubtedly performed with a partner. When no partner was available, it was beneficial to practice the moves alone. Eventually, various combinations of techniques were linked together, creating longer forms, or kata. Somewhere along the line (in Asia, at least), the partner work seems to have become lost in favor of the solo performance, the vestiges being practiced as secondary "bunkai" or applications. These were eventually stylized into prearranged practice sets that usually lack the realism of actual combat.

Yin and Yang and the Staff

The Western martial arts, however, never developed long solo forms, concentrating instead on combat drills and free fighting. This is not to say that Eastern forms are without merit. Quite the contrary, I have found that, like the yin and yang, training in one compliments training in the other.

In The Art and Science of Staff Fighting, I present the best of Eastern and Western traditions (along with a few in between), unified seamlessly to create a modern, logical, progressive, compact, and culturally diverse system of staff fighting that is easy to learn and applicable to any practitioner from any style.

If you want to learn how to actually fight with the staff, you would do well to spend your time studying the roots of the tree rather than smelling its flowers.

The long stick, commonly known as a staff, is certainly one of the oldest and most universal weapons in human history. In pre-history, before metal or even stone spear points were attached to the ends of sticks, the staff was used for self-defense. Historically made of hardwood, the length of the weapon usually depended on its original intended use. For example, shorter staves were used for walking sticks, while some, nine feet or more in length, were used to pole riverboats. Due to its similarity with hoes, spades, or other long-handled tools, the staff was often a practical weapon in agricultural communities where the peasant or common man was unable to purchase swords or other metal weapons. It should be no surprise that staff fighting systems originated in many countries around the world. Today, staff techniques can still be performed with common household items, such as brooms or garden tools.

A Brief History of the Staff

In the Asian martial arts, the staff is often considered the "king of weapons" for its ability to exploit the weaknesses of other weapons. The oldest recorded staff-fighting techniques can be found in China, where systemized gùn (rod or stick) techniques are thousands of years old. Chinese staffs are commonly made of white wax wood, while bamboo staffs, called lathi, were used in India. In the Philippines, the rattan staff, called a sibat, is common, while in Vietnam the staff is known as truong con and is usually made of rattan-like "spear bamboo." In Okinawa, the staff is called kon, and is traditionally made from red or white oak. Bojutsu, the formalized staff systems of Japan, were organized about 1300 A.D., and it is from it that we get the popular term bo (staff), the full name of which is rokushakubo, which roughly means "six-foot staff."

In Europe, where it was often called the "quarterstaff," recorded fighting methods date back to 15th century German manuals. Popularized in the 16 century English ballads and tales of Robin Hood, European authors on the subject seem to agree that the quarterstaff was among the best, if not the very best, of all hand held weapons.

Today, the most common staff length is about equal to the user's height, a versatile length, long enough for good reach while still short enough to allow quicker manipulation than a longer staff. It should, however, be remembered that each variant has its own advantages and disadvantages. A longer staff has an obvious reach advantage, while a shorter staff usually has less weight and thus a speed advantage.

At approximately one inch in diameter, a staff can be of uniform diameter throughout its entire length or taper in width from the center outward to either end. Some staves even have non-circular cross sections, such as hexagons or octagons, that allow the striking power to be focused onto an edge, dramatically increasing the pounds of pressure per square inch that can be delivered into the target.

Remember that it is the quality of your martial training that is of paramount importance, not the specifications of your weapon. If you are ever forced to defend yourself or your loved ones, the odds are that you will not have your regular weapons at hand. Instead, you will have to improvise and effectively wield whatever weapon may be at hand, be it long or short, light or heavy, sharp or blunt. Therefore, you must attempt to improve your odds by training with a variety of weapons at a variety of ranges.

This is why the legendary samurai Miyamoto Musashi stressed in his infamous Book of Five Rings that you should not favor any particular weapon.

That being said, "I love the staff!"

The above is an excerpt from The Art and Science of Staff Fighting: A Complete Instructional Guide by Joe Varady.