Combat with the Staff: The Moment of Truth | YMAA
Skip to main content
FREE Shipping Order Over $70. (US Only, Conditions apply)    |   Up to 40% Off. Exclusions apply.

Home >> Articles >> Combat with the Staff: The Moment of Truth 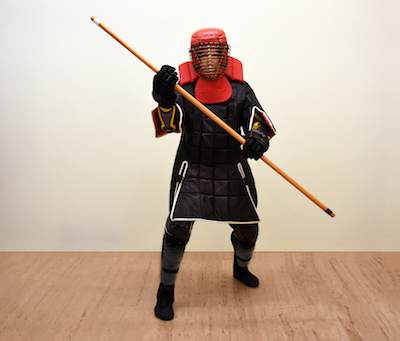 Combat with the Staff: The Moment of Truth

It is not unusual for sparring with the staff to feel awkward at first. There is a big difference between doing drills with a partner, and the chaos of combat against a non-compliant opponent who is trying his best to hit you. Stick with it.

Your techniques may not work well at first. You will get hit. Often. Sometimes it will hurt. Deal with it. Open yourself to the thrill that comes with training in combat sports, the satisfaction of overcoming hardships, and the confidence that comes with knowing that your techniques will actually work for you should you need them.

There are several different methods in which you can safely hone your weapons skills against an actual opponent in mock combat, without holding back very much, if at all. The secret lies in the proper combination of two key components: good protective gear and properly padded weapons.

Over the past decade, I have created many prototypes of different padded weapons and experimented with many different types of armor, testing them all in hours of brutal full contact combat. Here is what I have learned. Padded weapons, especially staves, are best made at home from easily acquired materials, while the best armor is usually hockey, lacrosse, or Eskrima gear. I will go over padded weapons construction first, since it is safest and requires a minimal amount of equipment. Then we will take a look at the best available armor, so you can eventually work up to full contact sparring with unpadded rattan staves.

My first Pugil sticks had a sturdy wooden staff as a core. They were padded on each end with open-cell foam rubber covered with duct tape. The wooden core proved too heavy, the open-cell foam did a lousy job of cushioning the blow, and the unpadded center section wasn't much fun in close quarters combat. Long story short, my latest designs feature a PVC core covered completely with closed-cell pipe insulation, with thick foam striking caps on each end. These endcaps are a key safety feature that I came to understand the importance of only after one of my students received three stitches across the bridge of his nose from a thrust to the face.

At first I wore no protective gear at all (ugh...caveman no need armor!), but you don't need to get smacked in the groin too many times with a padded staff before you learn the value of wearing a cup. I gradually added padding to my elbows, knees, hands, and head (not necessarily in that order.) One of the advantages of wearing a lot of armor or protective sports gear is that you can start to fight with non-padded rattan staves.

With well-padded sticks you can spar wearing only a fencing or Eskrima mask, a cup, and a pair of padded gloves. Foam hand gear used in karate was not designed for holding a weapon, so it leaves your thumb exposed and vulnerable to injury. If the staves are sufficiently padded, welder's gloves may be enough to ward off the sting of most blows. Lacrosse and hockey gloves offer excellent hand protection, but even these can sometimes leave your fingers open to hard strikes. Goalie gloves are specially designed with more padding, especially on the vulnerable thumb.

Open-faced foam karate sparring headgear is useless against any blows to the face. Fencing headgear protects the vulnerable face area and is easy to breathe through (very important when you're huffing and puffing in the middle of a fight,) but most provide little protection against strikes to the sides and top of your head. Eskrima headgear, on the other hand, is padded all the way around, and provides more protection than a typical fencing helmet.

In the end it is important that you experiment with different types of protective gear, pads, and armor (forearms, elbows, knees, body, etc.) until YOU feel adequately safe and protected.

Which brings us to the fight. Remember that this is just MOCK combat, and that no amount of padding or protective gear can make up for a good temperament, good technique, and good control. The fact is that injuries can occur whenever you are engaging in activities that involve physical contact, and even more so when fighting with weapons. Remember always that you are not out to actually hurt your partner (at least I should hope you are not!) Discuss how hard of a hit you are each comfortable with, as well as other rules, such as no punching or kicking, stop if the fight ties up or goes to the ground, or only controlled take-downs.

Start out fighting slowly and with little power. Such fighting is good as both a mental and physical warm-up, as well as an opportunity to feel out your opponent. After a few moments, you can gradually step it up a little, until you are fighting at an intensity level that is agreeable to both combatants. Always keep your head and never lose your cool, even when things get hectic. Take your weapons and the fight seriously, keeping always in your mind that, if these were real weapons, even a single blow, especially a shot to the hand, could decide everything. Training with such a mindset will improve your weapons skills much more quickly than a "hit them more than they hit me" attitude. Remember that good defense is essential. Try to anticipate where your opponent will strike you and then block or move out of range, but remember that defense alone will not win a fight. As for specific fighting tactics, remember to stay flexible and continually adapt to the ever changing circumstances of the fight.

When it comes to combat, timing is a very important concept to study and understand. The Japanese martial arts distinguish three types of timing: go no sen, sen no sen, and sen sen no sen. The word sen means "initiative." These terms are useful to us in understanding how to control and win a fight.

Go no sen is the most basic timing. It means to counterattack after your response to the initial attack. For example, your opponent swings at you, and in response you block, or do some other technique such as evade, then strike back. First, there was the attack, followed by your response an instant later. There was a small delay between the two. This simple timing is the one most commonly employed by beginning students of staff fighting.

Sen no sen is an intermediate timing method and indicates a simultaneous response to an incoming attack. In sen no sen, when you are attacked you counter at the same time. There is no gap, no delay. The disarming blocks are good examples of tactics that utilize sen no sen timing, in which you target the opponent's lead hand with your block...or is it a strike?

Sen sen no sen timing refers to a preemptive movement or technique. Your opponent intends to launch an attack, but you prevent it before it can even take form. This is the most advanced form of timing, representing the highest state of awareness and control because it is the act of reading the opponent's intentions and knowing what they are going to do, almost before they do. It is a level of competency and understanding that only comes with years of diligent training.

So, say your opponent somehow gets the jump on you, swinging their staff downward intending to crack your skull. You barely have time to throw up a roof block to stop his attack before sharply sliding your staff down and into the opponent's lead hand. This is a good example of go no sen. The opponent pulls back to strike at you again. You are not surprised to see he has unconsciously chosen the most common habitual method of attack, a downward diagonal strike aimed at your head. You instantly plot the trajectory of his attack and initiate your own attack, intercepting the opponent's front hand mid swing. This is a good example of sen no sen. Finally, your frustrated opponent moves to make a third swing, but before he can even initiate his attack, you attack his front thigh with a quick thrust strike. This thrust straightens his front knee and kills his momentum by preventing him from shifting his weight into the attack, stopping it before it even begins. This is sen sen no sen.

The above is an excerpt from The Art and Science of Staff Fighting by Joe Varady.