Home >> Articles >> Sumo: A Case Study in Size vs. Technique 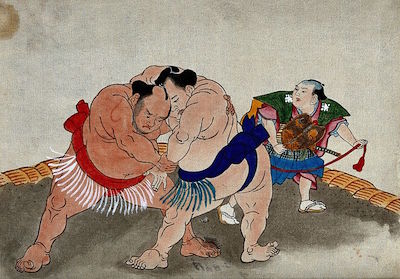 Sumo: A Case Study in Size vs. Technique

Sumo is the fusion of honored ritual with unbridled power. Even in a combat sport like sumo, where great body mass and girth are often winning factors, superior technique can overcome size and strength.

Sumo is the fusion of honored ritual with unbridled power. Even in a combat sport like sumo, where great body mass and girth are often winning factors, superior technique can overcome size and strength. Some of these sumo techniques may look familiar to many grapplers, since there are only so many ways you can take someone down and many popular grappling arts are derived from the same source, jujitsu.

"Sumo is the primogenitor of all martial arts and ways that came later in Japan. When we practice our budo (Japanese martial ways) today, in some ways we are carrying on an ancient tradition, tapping into a current that electrifies our training and lifts it into a sphere far beyond that of other activities." (Lowry, 1992: 92)

Nonetheless, looking at takedowns from a sumo perspective can add a fresh advantage to your MMA grappling style. Other martial artists, especially competitive grapplers like judo, sambo, and BJJ (Brazilian Jujitsu) players, can benefit technically from the knowledge and application of sumo techniques. Of course, to really gain the full potential of sumo techniques, the training of the techniques should be done in live-grappling sparring, after the basic mechanics of the techniques are thoroughly drilled. A dynamic sumo move may just be another piece of the puzzle in your quest for more effective fighting techniques. Sumo, the root of jujitsu, has much to offer all martial artists.

Some wrestler's body types and fighting styles can vary dramatically and their bouts can be quite interesting when they get together in the ring. When it comes to fighting styles in sumo, there are basically two types: traditional belt sumo wrestling and pushing sumo wrestling. Undoubtedly, there are many rikishi that are proficient in both styles of sumo wrestling, but usually a rikishi focuses on either a pushing style or a belt grabbing style.

In sumo, size certainly matters, but technique matters as well. A case study in size versus technique naturally leads to the popular Japanese rikishi, Mainoumi Shuhei. He was 5 feet 7.5 inches in height and only 220 pounds, a very small person by sumo standards. Mainoumi used up to thirty-three kinds of kimarite in his wrestling days. Because of his broad use of kimarite, he was nicknamed "department store of techniques" (waza no depaato). Mainoumi has said "The eighty-two kimarite enhance the value of sumo" (Misawa, 2006). Mainoumi rose to the komusubi rank, the fourth level from the top, an incredible achievement for a small rikishi in a field of giants.

Mainoumi was one of the most popular rikishi in the 1990s as his great fighting spirit and broad use of kimarite made him stand apart from the other much larger rikishi he was wrestling. For a tiny rikishi, Mainoumi's strong judo background combined with his remarkable physical strength and agility made him a very formidable opponent. It was not uncommon for Mainoumi to win against rikishi who outweighed him by two to almost three times. A solid push from a larger rikishi would launch him in the air. Also he would lose if a larger rikishi achieved a dominating hold on him. Because of this, Mainoumi would at the start of the bout feint a forward charge and then quickly jump off the line of attack. Frequently the larger rikishi's forward momentum was committed enough that he would fall to the ground. If that didn't work, Mainoumi was prepared to get beside or behind his opponent and push him out of the ring or down to the ground.

Opponent's started to catch on to Mainoumi's tactics and wouldn't commit themselves to a full on charge at the start of the bout. The match would be downgraded to a non-committed pushing contest. This is a contest Mainoumi couldn't win, so he would slip or jump to his opponent's side or back. He had plenty of strength and leg techniques to throw opponents once he was in a dominant position. Mainoumi was most vulnerable when squared up in front of his opponent. This occurred often when facing other smaller, fast rikishi like him.

Deceiving the Cat and Other Techniques

Mainoumi, at the initial charge, would commonly employ quick and cunning moves, shocking both the opponent and the audience. For instance, he would use an unconventional sumo wrestling technique called "deceiving the cat" (nekodamashi). At the start of the bout, a rikishi abruptly claps his hands together just in front of his opponent's face without touching it. The objective of this technique is to cause the opponent to close his eyes for a moment and distract him briefly, giving an advantage to the hand clapping rikishi. This technique can be risky as, if it fails, it exposes the rikishi to his opponent's onslaught. The hand clapping is not that difficult. The hard part is how the opponent's brief distraction is instantly leveraged to gain the advantage. However, this trick will probably work only once on a particular opponent, as he will be expecting it the next time. Nekodamashi is listed as a non-technique victory (hiwaza) and is not listed as a kimarite.

The mawashi is the belt worn by the rikishi. "The law of the ring" is that the one who dominates his opponent's mawashi with a controlling grip will almost certainly win the match. Mainoumi considered his opponent's mawashi his "life line": if he did not grip it he would lose. Mainoumi has said that where you grab the mawashi determines how you can turn or throw your opponent. The mawashi grip gives the rikishi the greatest leverage.

According to Mainoumi, "The worst scenario for a small rikishi is having to face a strong head-on charge. If this happens he will be overpowered and pushed out instantly. This is the most dangerous thing. To absorb the bigger rikishi thrusting he can pull back his shoulder quickly and weaken the power of the attack. You have to be innovative. Respond flexibly in order to cope with a bigger foe" (Misawa, 2006). To be innovative and flexible, the martial artist must dig deep into his technical repertoire to unearth appropriate solutions to the problems presented.

A prime example of Mainoumi's advice can be seen in the November 1991 match he had with Akebono (Chad Haakeo Rowan). At over five hundred pounds, Akebono was over twice Mainoumi's weight and, at 6'8", he was much taller. Mainoumi won the match by using a kimarite that had not been used in twenty years in a major tournament. He used the move judged by most observers to be a triple attack force out (mitokorozeme), but was officially judged an inside leg trip (uchigake). They are both leg techniques, which Mainoumi prefers, as they are an effective way for small rikishi to take down massive opponents.

The above is an excerpt from Sumo for Mixed Martial Arts: Winning Clinches, Takedowns and Tactics by Andrew Zerling.