MMA Champion, Lyoto "The Dragon" Machida, Incorporates Sumo into his Fighting Style | YMAA
Skip to main content
FREE Shipping Order Over $70. (US Only, Conditions apply)    |   Up to 40% Off. Exclusions apply. 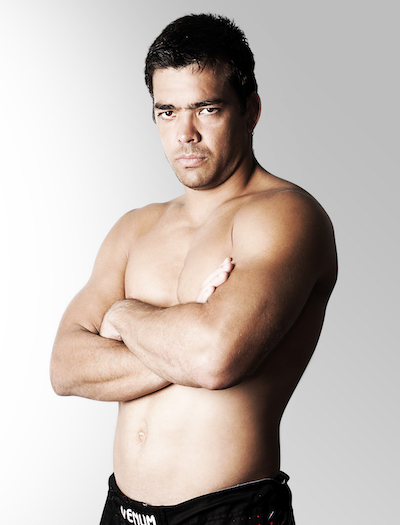 A prime example of how a MMA fighter has incorporated sumo into his game is former Ultimate Fighting Championship (UFC) Light Heavyweight Champion Lyoto "The Dragon" Machida. He has a strong sumo background, but his primary style is traditional Shotokan karate.

A prime example of how a MMA fighter has incorporated sumo into his game is former Ultimate Fighting Championship (UFC) Light Heavyweight Champion Lyoto "The Dragon" Machida. He has a strong sumo background, but his primary style is traditional Shotokan karate. Belém, Brazil where Machida grew-up, had a large Japanese colony. Machida was introduced to sumo by this Japanese colony and began training and competing in sumo at twelve years of age.

Machida trained hard in sumo, even winning several sumo tournaments. Machida says in his book, Machida Karate-Do Mixed Martial Arts Techniques, "I knew that every martial art had its strong points, and I figured the more martial arts I trained, the more weaknesses I would eliminate from my game." Machida states that his clinching, body-to-body sensitivity, balance breaking and takedown skills were vastly improved by his sumo experience. In his book, Machida even demonstrates a sumo takedown from the over-under clinch that he found useful in MMA. The sumo takedown shown in his book looks to be a variation on the inner thigh sweeping twist down (uchimuso).

Machida mentions that during his MMA fight with Rich Franklin in Japan on December 2003, his ability to keep his base from sumo training helped him achieve a top position on the ground after Franklin sunk in double-underhooks for an attempted throw in the first round. While in Franklin's guard Machida escaped his triangle choke attempts and fired back with some solid punches. From a standing exchange of strikes Machida knocked Franklin out unconscious in the second round.

When Machida fought BJ Penn in the K-1 - Hero's 1 event in March of 2005, he was able to keep the fight standing most of the time and control him in the clinch by using his evasive maneuvers and sumo training. This tough MMA fight was won by Machida by unanimous decision. Also, Machida has successfully used the sumo kimarite outside leg trip (sotogake) numerous times in MMA competition. Outside leg trip (sotogake) is when your calf is wrapped around the opponent's calf from the outside so you can drive him down backwards. This outside leg trip is demonstrated in the technical photos section of this book. During his MMA fight with Tito Ortiz in the UFC 84 event in May of 2008, Machida stopped Ortiz's takedown attempts and took Ortiz down with ease using the outside leg trip (sotogake). Machida beat Ortiz by unanimous decision.

In UFC 98 in May of 2009, Machida faced Rashad Evans. With his stellar stand-up skills Machida KO'd Evans cold in the second round to win the UFC Light Heavyweight title belt. When Machida fought UFC Hall-of-Famer Randy Couture in UFC 129 in April of 2011, his takedown defense kept the fight standing long enough so he could knock Couture out with a surprising front kick in the second round. Machida's elusive standing style of fighting sometimes makes his opponent's want to rush in to close the distance. The Bader vs. Machida fight showed why this is a big mistake. In UFC on Fox 4 in August of 2012, Ryan Bader rushed Machida and ran into a right hand to the jaw that immediately knocked him out for Machida's win in the second round. When Machida faced Dan Henderson in UFC 157 in February of 2013, Machida was able to mostly keep the fight on his feet even though Henderson is an expert Western wrestler. Machida even takes Henderson down at the end of the first round with a trip. Machida won via split decision.

Machida is primarily an intelligent "sprawl and brawl" fighter. He grew up learning traditional Shotokan karate and that is the strongest aspect of his game. Because karate is his main style, Machida prefers to stand and fight southpaw in a wide angled Shotokan stance against his opponents. He uses high level hit-and-run tactics with amazing footwork and powerful counter-striking. He also has extensively studied muay Thai, Western wrestling, judo and sumo which gives him the strong ability to attack in the clinch and thwart takedown attempts so he can stay on his feet. Machida has been pitted against some of the best takedown experts in modern MMA history, Couture and Henderson for example, and has been able to keep the fight mostly standing and work his counter-striking magic. Also, with his black belt in BJJ he is very dangerous in the ground phase if he ends up there. Most of his MMA wins via fight stoppage are from KO/TKOs and several are from ground submissions, although most of his fights in MMA are won via decision. With his diverse and complete training background, he has a unique, powerful, unorthodox and elusive MMA style. Machida has achieved remarkable victories over some of the highest level MMA fighters, including Rich Franklin, B.J. Penn, Vernon White, Tito Ortiz, Rashad Evans, Mauricio Rua, Randy Couture and Dan Henderson. With his eclectic approach to martial arts training and very impressive MMA fight record, Machida has become one of the most formidable MMA fighters of his time. It is very interesting to note that sumo was an important component in his MMA fighting game.

The above is an excerpt from Sumo for Mixed Martial Arts; Winning Clinches, Takedowns, and Tactics by Andrew Zerling