Simple Drills Worth Knowing | YMAA
Skip to main content
FREE Shipping Order Over $70. (US Only, Conditions apply)    |   Up to 20% Off. Exclusions apply. 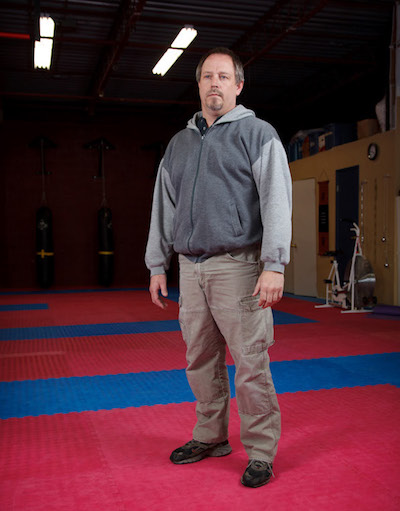 The following are important things, some little, some major, that lend themselves well to simple drills or exercises. Backing up is almost never the answer. Unless you are excellent at reading and remembering tactical terrain, you might not know what or who is behind you.

The following are important things, some little, some major, that lend themselves well to simple drills or exercises.

Backing up is almost never the answer. Unless you are excellent at reading and remembering tactical terrain, you might not know what or who is behind you. You probably wouldn't be falling back if you were winning anyway and falling back keeps you in the threat's sight. Lastly, you can't run backwards as fast as a bad guy can run forward. Going straight back is almost always a losing battle.

Tactically, it is just easier to take someone down (or get away) from behind or the flank. This is one of the places where good tactics, otherwise known as intelligence, goes up against social conditioning, sometimes called stupid dominance games.

When fighting humans, humans want to fight eye-to-eye. They want the other person to see the face of the person who won and acknowledge dominance. This is so ingrained that even people who know better and who have trained specifically to get behind (it is inherent in karate kata; the best position in grappling systems; aikido has dozens of techniques to get there) wind up standing toe-to-toe, throwing wild punches and eventually rolling around on the ground.

Get this: as socialized humans, we fight other humans. We play dominance games. A serious criminal is past that. He has already dehumanized you to the point he can use violence. He doesn't need to work himself up to fight and for that matter won't fight at all. He takes you out.

Think about it. You don't need to work yourself up or turn it into a contest or "fight" any animal that you kill for food or any flies that you swat or mice that you trap. The human predator is thinking of you this way, as a resource. It allows him to use extreme force very quickly, something most humans can't do. You will not beat a predator by playing a dominance game.

So for at least two reasons: because playing in the threat's target zone is stupid and to get to a better position, we need to practice getting off the line.

The drop step is deliberately falling. It uses gravity as a speed and power multiplier, and gravity doesn't telegraph. There are no tells to falling.

The concept is simple. Stand with your feet shoulder width or a little more apart and suddenly lift one. You will immediately begin falling to that side. If you do it right, which you won't at first.

Trained martial artists have been told since the first day to always stay on balance. Now some schmoe is writing in a book that sometimes it is very useful to fall on purpose. So you go with your years of training and subtly, subconsciously, shift your weight to your left foot before raising your right. So you don't fall right away, but slowly, like a teetering tree. Furthermore, the shift of weight to the other side is the telegraph that the technique shouldn't have.

If your right foot snaps up with no attempt to control balance you will move, falling faster than you could step.
Often saying the words doesn't help. The trick I use is to snap my right foot to touch my left knee as quickly as I can. The effect you want is not a step, but like a leg has suddenly been removed from a stool.

Your foot will get back to the ground in time to keep you from falling down.

You begin the drop step drill by having your partner throw straight punches at the center of your face. He knows you are moving, so he has to guard against anticipating or tracking your movement. If necessary, make him shut his eyes when he punches. You simply fall to the side.

Start slow with the punches. As the fall becomes more reflexive it will work against faster and faster punches. There is a limit, of course. You begin the fall on seeing the punch so it won't beat the action/reaction gap, but neither will a block or slip if the strike isn't telegraphed.

When that is comfortable at decent speed, start angling, using the drop step to fall at 45 degrees towards the threat. You will find that you don't need to change your foot position. Your back leg can launch you without slowing the fall (and here we replicate the body mechanics of the fencer's lunge).

Because you are not falling directly out of line, you may want a little insurance. If you are falling forward left, your left foot will be lifted. Bring your left hand up in a natural circle so that it crosses your face and ends with the back of your left hand almost touching your right ear.

If your drop step is perfect, you won't need the insurance. If not, the circle will gently intercept the hand and glide it. Often, the partner will not even know that he missed. Do not try to aim the block or intercept the punch or push on the arm. Just make the circle and let physics take care of the rest. 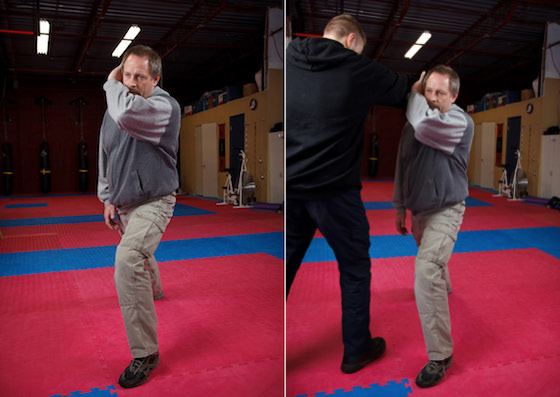 Coaching point: For some reason, people like to use the rear hand with the lead leg. Watch for it. It doesn't work in this motion.

The last piece is recovery. Your partner punches, you drop step offline, paying the insurance and then you pivot towards him bringing your rear leg under you for a solid base. You've now flanked him and successfully evaded the attack. He is your cat toy.

If he was giving you a lot of reach, like a karate lunge punch, you will actually be behind him. If he is going full speed and you drop step and pivot, it has the interesting effect, from his point of view, of you getting behind twice as fast as a human can move. Nice.

Note: the drop step is also a great power multiplier. Once you have it down, practice falling into your strikes. Use it to close distance and strike for entries, to make your punches and short range elbows more efficient and to give you something that works, even when someone is too close on your rear flank (drop step with the point of the elbow leading.)

Hitting requires power, timing and a good target. Hitting a big bone with a little bone is more likely to damage your fist than a skull. The upper chest can take a huge amount of force without impairing function.

Targets have to be learned and they have to be practiced. The targeting drill is simple. One partner stands like a statue in any position. The other partner works all the way around the statue's body, 360 or 720 degrees, launching a light-contact attack at all the targets he or she can think of. Work it like a continuous flow of constant damage and have fun.

It's educational to watch as well. Beginners know very few targets, their footwork is awkward as they circle and they don't play with range. Experienced martial artists do, but some (and this is stylistic) miss entire categories of attacks or targets. Some will work pressure points and others will ignore them, some will unbalance, wrap and lock, others won't. Some will ignore the legs as targets.

You learn a lot from watching people with different training experimenting with any drill.

Locks may not be a part of your training. But you might be interested in learning more.

Some people say that you can't use locks, particularly small-joint locks, in a real fight. I've done so extensively and thus I disagree. There are several reasons for this. Years of training, decisive movement and, possibly most important, I'm not married to the idea. If I get a lock, swell. If I don't or miss one or lose one, I transition immediately to something else.

One of the most important distinctions is that I never go into a situation looking for a particular lock. Locks and throws, in my experience, are always gifts. The bad guy puts himself in a position where the lock or throw is just there and I finish it for him.

In order to do the lock flow drill, you must be thoroughly familiar with joint locks. It will work if you have memorized a bunch of locks for all the major joints but it will flow easier if you understand what locks are and the common principles.

Locks rely on gifts. You will not get an elbow lock on someone pulling in, but that action will hand you a shoulder lock, a wrist lock or both. Pushing gives up the elbow ... If you have played with joints enough, you will understand this instinctively.

The lock flow drill is conducted much like the one-step. It is slow and noncompetitive. The partners must communicate. Tapping is important but just saying, "That's good" or "You need to rotate a little more to get it . . ." are critical. These are partners, not enemies.

Do this: Partner A stands in any position. Partner B then applies a lock of any kind. It is not fast or hard and not meant to move A or hurt, just to demonstrate a lock. Partner A then flows out of the lock.

Flowing out can take some explanation. Most locking styles teach rolling or flowing with the force of the lock. That's one way. But a slight shift into or away from most locks can take the elbow, for instance, off the fulcrum point and the lock vanishes. Most locks have a big hole perpendicular to the line of force in the lock where there is absolutely nothing keeping the person from just pulling out, except for the instinct to fight against pressure instead of emptiness. Most locks have nothing to prevent a lateral rotation out of the lock.

Any of these methods are acceptable, just don't rely on strength. If you do use strength, use it smart. Instead of trying to muscle out of a wristlock, just grab the hand with your other hand and pull it to your chest. Works like magic, most of the time.

Once A has escaped from the lock, he examines B's position and finds the lock that B is giving him. If an arm is straight, there's an elbow lock. Elbow bent close to 90 degrees? Just a twist away from a shoulder lock. Extended finger or two? Sweet.

A takes the gift, B flows out and starts looking for a gift ...

It is a continuous flow drill, far more about learning to see opportunities than applying technically perfect locks.

When coaching, remind the students that locks don't require hands all the time. There will be lots of opportunities to lock with waist, neck, shoulder ... almost infinite possibilities.