Fighting Physics: The Mechanics of the Staff | YMAA
Skip to main content
FREE Shipping Order Over $70. (US Only, Conditions apply)    |   Up to 40% Off. Exclusions apply.

Home >> Articles >> Fighting Physics: The Mechanics of the Staff 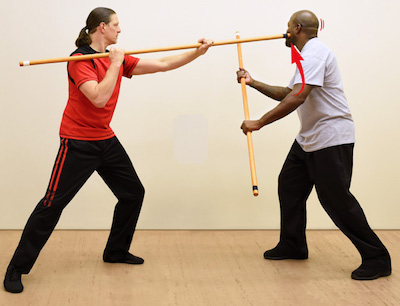 Fighting Physics: The Mechanics of the Staff

Physics is one broad brushstroke of a topic! If we got technical, we could talk about how the atoms of the staff and the arrangement of the wood fibers along its length give the staff its unique characteristics, capabilities and combat effectiveness.

Physics is one broad brushstroke of a topic! If we got technical, we could talk about how the atoms of the staff and the arrangement of the wood fibers along its length give the staff its unique characteristics, capabilities and combat effectiveness. A stack of firewood set aside to mark the course of a winter's evening's discussion, even one that touched only upon the basics, would be long gone before we scratched the surface.

To pare down this topic into something more manageable (and practical), let's focus on mechanics. Mechanics is a branch of physics that deals with motion, and all the larger facets of staff fighting are rooted in motion: striking, blocking/parrying, and levering. Even the footwork we use in staff fighting involves setting up ideal pathways for the transmission of force and leverage through these facets.

The bottom line is that a proper understanding of mechanics will help you gain a properly informed feel for the staff. If you use the technical explanations to gain understanding, then use your understanding to guide practice, then practice diligently and ceaselessly to cultivate intuition, then you will develop the ability to respond wisely, not simply react quickly, to the inevitable surprises that come up quickly in staff fighting.

If you want to get to the bottom line of striking and blocking right away, then there are three complementary concepts you should know:

Newton's Second Law of Motion states the relationship between force (F), mass (m), and acceleration (a). Newton said that force equals mass times acceleration (F=ma), and you could interpret that two ways, since you can read that equation from right to left or from left to right: when you receive a force, you are receiving a mass that has been accelerated towards you, and when you want to accelerate something, you will need to generate force to set its mass in motion.

Now if force can accelerate mass, we have to wonder whether time has an effect. Think about pushing a car with a bad starter: you lean into the back bumper of that old Chevette while your friend steers, and it starts to roll. The longer you lean into it, assuming you're still on a flat surface, the faster it rolls. Accelerating mass to a certain velocity, or speed in a particular direction, involves applying force to it for a certain length of time. At a given moment, we could measure how fast and in what direction the ol' beast is rolling, and that would give us its velocity.

A second equation, Ft=Δmv, expresses the relationship between force and time, on one hand, and mass and velocity on the other. Ft is force times time and that Δ (Greek delta) means "change," so the longer you apply force (Ft), the greater the change will be in the velocity of a mass. Foot- ball linemen are taught to drive through their opponents in order to keep them moving back, back, back. To train for this, they don't hit the sled in practice and then stop pushing. Rather they use a constant force over a longer period of time to move their opponents back at a faster and faster rate. Finally, it's also important to be able to talk about forces in terms of work and energy. Work involves force being applied to a resisting object, like your opponent's weapon or body that does not want to move. The more you move that object, the more work you are doing. In mechanics, we use the word "work" a little differently than in daily conversation: since W=Fd, where W is work, F is force, and d is distance, unless you're covering d, you're not really doing any work. I know a lot of desk jockeys who might disagree with this, but physics has its own opinions on the matter.

At this point, let's dive right into striking, for there is no better way to illustrate the finer points of KE than to start swinging.

On an episode of National Geographic Channel's Fight Science, a television show dedicated to applying laboratory techniques to the study of the martial arts, they demonstrated that the staff can strike with an amazing 2,769 pounds of force, more than twice that of a short stick strike. This is because the staff has more mass, and, like a bicycle tire, the tip is moving faster than the center of rotation. At three times the length of a traditional eskrima stick, the staff travels a much greater distance to the target in roughly the same amount of time. More mass moving at a greater speed results in more momentum and more impact with the target.

By that, I mean:
1. Literally, strike as fast as you can, because that maximizes the kinetic energy of your strike,
and
2. Strike at a right angle to your target surface in order to maximize energy transfer.

Think about a compressed spring. That is an image of stored energy, waiting to be released. Stored energy is called potential energy, and you have it in your muscles, through the miracles of chemistry and biology, and in calories in food. When you "burn" those chemicals, you release their stored energy as kinetic energy, or energy in motion.
You can maximize the kinetic energy transfer into an object or opponent, the power of your strike, by maximizing mass in motion and velocity.

Mass is more than weight. It is the actual amount of matter in an object. To visualize, consider a pebble and a small boulder. Assuming that they're made out of the same type of rock, the boulder will have more mass than the pebble: it simply has more rock in it.

Which would you rather have fall on your foot? If you answered "the boulder," then I suggest you put this book down, perform the experiment, and get back to me about the results. If you said "the pebble," then you have an intuitive understanding that the resulting pain of impact will be less with the less-massive object.

With mass in mind now, let's consider the way a physicist actually calculates kinetic energy, because the mathematics will illustrate an important point about the relationship between mass and velocity. We just said that mass in motion is important, but: KE = 1/2mv2 .

This means that kinetic energy equals one half of the mass times the velocity, or how fast an object is going in a particular direction, squared. Not just "increased" or even doubled, but squared.

Consider that pebble and boulder problem again. If I asked you again which you wanted to fall on your foot, but I said that for this trial you would drop the boulder from knee-height onto your foot, but that you would fire the pebble out of a pistol at your foot, giving it a lot more velocity than the trial before, then I wouldn't fault you for choosing the more massive of the two.

In summary, striking as fast as you can with precision, with as much mass in motion as you can muster, will give you the hardest hit.

It is worth noting that striking isn't always about generating the hardest hit. Sometimes you simply want to tap a target in order to draw the opponent's mind to that point. Sometimes you want to come in fast...and then switch direction for the real strike that you just feinted for.

A good musician will tell you that dynamics are virtually important to performance. It's not always about playing the notes loud or soft, it's about mixing those two up in such a way that you lead the listener into the song through the spectrum of loud and soft that you play as you go. So, too, with striking. Learn to control the dynamics of your strikes to lead the opponent exactly where you want her to go.

We've all been in snowball fights, so I'll use one to illustrate this maxim. Remember the times that you've been hit in the face with a snowball? Which hurts more, the glancing blow that grazed your cheek, only to rile you up that much more, or the one that caught you square between the eyes and dropped you on the spot?

Consider car collisions. Which does more damage to the occupants, the sideswipe or the head-on?

When you want to impart the most kinetic energy to a target, you have to impact that target at a right angle. Anything else, and the energy will be dissipated in directions other than one you want.

Come to the lab: hang a heavy bag and run the following experiment to see just how much energy can be lost as the striking angle moves further and further from 90 degrees. First, strike at 90 degrees and listen to the sound of the impact. Note the movement of the bag and the lack of slide or play between the staff and the bag surface. Next, mirroring the velocity of the first strike, strike the bag again at about a 60-degree angle. Up or down, it doesn't matter. Note the decreased movement of the bag: less energy was transferred into the bag from your strike. Note, too, the way the staff slides against the bag surface, dissipating the energy of your strike in a harmless, sideways motion. Try this again at 45 degrees to the bag surface, then again at 30 degrees or less. If you keep the velocity and body mechanics of your strike the same, except for the angle, then you will notice the diminishing return of energy transfer.

Notice, too, that you will tend to compensate reflexively. You will find yourself dropping your bodyweight into the strike if you're striking down, just to retain the power. You may notice an uppercut structure starting to take over as you strike up, a reflex to keep your hips in the power arc. This is natural and good: it shows that you have the instinct to compensate for a less-than-desirable angle by maximizing other elements of the kinetic transfer. What is best to cultivate, however, is the deep awareness of the right angle in striking: it optimizes all the elements of the hit.

The above is an excerpt from The Art and Science of Staff Fighting by Joe Varady. This excerpt is written by Chris Hall and is found in Appendix 1 of the book.

Chris Hall is an academic dean at the Covenant School in Virginia. His formal martial training began in 1991at Gettysburg College under the tutelage of Sensei Kay Etheridge, Sensei Don Walz and Sensei Joe Varady. He earned his black belt in 1995 and his Shodan in 1997. He has also earned rank and certificates in aikido, Filipino martial arts and combatives. He is an avid micro farmer, and lives off the beaten path in central Virginia with his wife and three sons.