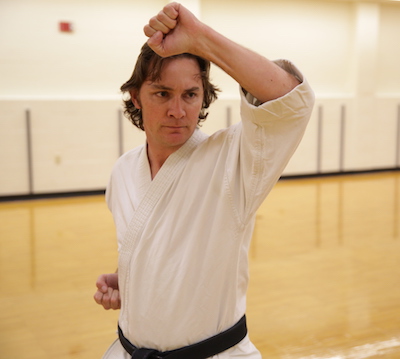 Karate-do, or any other martial art, is, at its core quite simple. However, it can be made far more complex than what it actually is. The multitude of techniques, combinations, kata, and partner drills—combined with nebulous concepts like "use your hips," "lower your stance," "do budo karate," "make more kime," and "use your ki"—can make martial arts seem overwhelming.

While the many concepts are important, they are often treated as doctrine in the teaching of karate. This can foster misconceptions and hamper understanding, and therefore practice, of karate, often for very long stretches of a student's training.

Additionally, when attending seminars, clinics, or even everyday class, students are often inundated by a multitude of techniques and spend much of their time simply trying to understand what is being taught. This may perhaps be the wrong approach. An example is the theming of individual lessons. It has become very popular to "theme" individual lessons: teach a single concept throughout. This could be a particular technique or group of techniques, such as zuki or keri; individual concepts in training, such as polishing a kata or kata bunkai (application); or perhaps concepts or principles that relate to budo overall, such as the correct use of hips, timing, or posture. The latter is a far more advanced method of teaching karate and uses techniques (kihon), kata practice, and partner training (kumite) to illustrate and reinforce overall principles that show a practitioner how to do karate. If these principles are understood and followed, students will elevate their level overall.

So out of the multitude of principles available, which are the most important to learn? In conversations with some of my own high-ranking seniors, many agreed on certain points. But Sensei Steve Ubl (eighth dan, World Traditional Karate Organization) said it the most succinctly: in order to do karate effectively, there are four fundamental areas to be mastered: posture, structural alignment, body mechanics, and practical functionality.

Good posture is fundamental to all karate and martial arts practice. Posture refers to the back being straight from head to hips: The backbone is straight, the head sits atop the shoulders and is not slumped forward, the tailbone is tucked, and the pelvis is tilted in such a way that the lower back is straight. It is important not to have the lower back relaxed so that the buttocks stick out or are contracted too far so that the pelvis is pushed forward and under. Finally, note that having a straight back does not mean that it is perpendicular to the floor. It can be tilted relative to the floor, as long as it is straight from tailbone to head and it contributes to the structural integrity of the technique. A perfect example of this is in yama zuki or mountain punch.

One of the main goals of karate is to have the body postured in such a way as to allow a direct connection from the floor to the striking limb at the point of impact. In fundamental karate, this is how techniques such as oi zuki finish (see below). The final position, although held very briefly in a real encounter, is vitally important. These alignments provide the strongest position of the body for a particular technique or a particular target.

When we hear the term "oi zuki" or lunge punch, we often imagine a karate technique with one leg out in front and the arm on the same side out punching. However, if we only consider the final position of the technique as being the complete technique, we will have missed much of the point. The term oi zuki refers to the entire motion of a stepping punch from start to finish. In some ways the Japanese names of the techniques are verbs rather than nouns: they refer to motions and the body feeling of doing those motions. However, being aware that the entire motion is important, how that motion is completed—especially with reference to its mechanics—is vital. Bruce Lee often talked about economy of motion. This concept simply means good body mechanics. By having good mechanics, martial artists will be faster, hit the target with much more force, and experience much less wear and tear on their bodies through training.

Distancing, or maai, refers to the physical spatial relationship that two people share during an encounter. It changes constantly, and the length of limbs will alter what techniques may be thrown at any time. It is important for practitioners to consider both the length of their own maai (What can I hit them with right now?) and their partner's maai (What can I be hit with right now?) and learn how to control the distance to their advantage.

Timing can refer to a multitude of things in karate. Initially, it can mean the mechanical requirements of a technique. For example, in a reverse punch, is the hand stopping as the hip stops moving, or have the hip and body center stopped moving, with the hand going on by itself? Obviously, it is best if the hip, body center, and hand all stop concurrently. Timing can also refer to the temporal relationship between opponents, that is, the timing involved in successfully launching or defending against an attack. Both timing and distance are intimately linked, and understanding the relationship between the two is paramount.

A well-founded knowledge of how each technique is applied is also vital for understanding karate, or any martial art. Once all of the above requirements are met, the technique may be practiced with a partner. This includes body positioning, foot positioning and entry, target acquisition, reaction of the target, and changing both practitioners' body positions after the application of the technique to set up for the next technique.

These four fundamental requirements need to be studied vigilantly in order to become proficient at karate, and martial arts in general. Each must be thoroughly mastered at an instinctual level. With this in mind, it could be said that the measure of your karate ability lies not necessarily in the number of techniques or kata you know, but rather in how good your fundamentals are. These fundamentals must become second nature, which can often only be achieved over a lifetime. One thing is certain: only through constant, vigilant practice can our body begin to understand these fundamentals.

The above is an excerpt from Karate Science: Dynamic Movement by J.D. Swanson, PhD