Introducing new YMAA Author! Lee Holden, Part 2, In His Own Words | YMAA
Skip to main content
FREE Shipping Order Over $70. (US Only, Conditions apply)    |   Up to 20% Off. Exclusions apply. 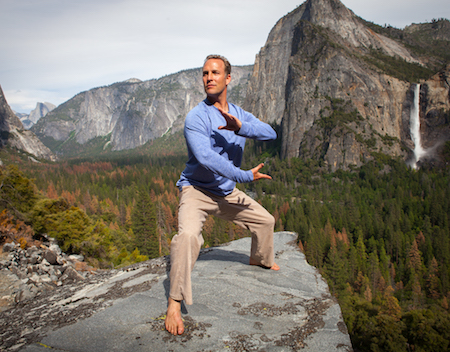 For the next month, I would go to Master Chia's house and work out every day. We would train for about an hour and a half, practicing tai chi, qi gong, breathing exercises, and meditation techniques. What I kept realizing again and again was that this practice was not new age fluff, but a body-mind-spirit science. Master Chia was showing me formulas that had been tested for the last 4,000 years. He explained that these exercise and meditation routines were like a well-trodden path to the top of the inner mountain. If you practice them, you will reach the peak and enjoy the expanding vista of a clear mind and radiant health.

More of My Dream Job

For the next month, I would go to Master Chia's house and work out every day. We would train for about an hour and a half, practicing tai chi, qi gong, breathing exercises, and meditation techniques. What I kept realizing again and again was that this practice was not new age fluff, but a body-mind-spirit science. Master Chia was showing me formulas that had been tested for the last 4,000 years. He explained that these exercise and meditation routines were like a well-trodden path to the top of the inner mountain. If you practice them, you will reach the peak and enjoy the expanding vista of a clear mind and radiant health.

Getting this information first hand was an incredible learning experience. But, keeping up with Master Chia was no easy task. He only slept four or five hours per night and had the energy of a power plant. He explained to me that nature had an unlimited amount of energy and all we needed to do was be receptive to it. Here was a man in his late 50s, at the time, who slept very little, who rarely got sick, who traveled to 15 countries a year, who wrote 16 books in five years, and had developed the Tao Garden (the first holistic health center to incorporate fitness, organic nutrition, tai chi, qi gong, and meditation).

Master Chia expected the most from me and was not easy on his main students. I remember one day during lunch, I asked him if I was ready to pass the test and become a tai chi instructor.  He replied, "Show me your form." I hesitated. There were over 100 people in the dining hall. "Right now?" I asked pleading with my voice to postpone his request. "Now."

I took a deep breath, brought my feet together and began the form. When I stepped into the first posture, my legs where shaking with nervous tension. I felt like Elvis as my knees shook back and forth. I could feel everyone in the room watching me, happily eating their Pad Thai noodles while I was sweating through the form. As I continued, Master Chia got up from his chair and walked around me. He slapped me in the back, three or four times firmly, "more power here." I continued focusing my awareness on the lower back area called the Ming Men, "door of life." Master Chia then began to push on my shoulders and hips as I moved. I struggled to keep my balance and maintain my center. I stumbled a few times as he pushed, but kept moving through the form as best as I could. This went on for what seemed like an eternity. Finally, he sat back down and said, "You only need to do form 1,000 times more." It was a nice way to say that my form completely stunk, and I had a long way to go before I could pass the test.

The next day, he started me standing in the turtle posture (imagine a downhill skier in a tuck position, deep knee bend to ninety degrees, elbows in and head down) for five minutes at a time.
He then would push me on the shoulders and hips to make sure my structure was intact. I had suffered through double days in soccer, but this was even more grueling. This training pushed me past my limits of what I thought was possible. He often showed skepticism about how a white kid from California could master these internal martial arts. But I was not going to give up. I did the exercises another 1,000 times, and then another 1,000.

Six months later, I thought I was ready for the tai chi test with Master Chia. I found Master Chia and asked if he would test me in the form again. He smiled, as if to say, didn't we just do this? I started my form with much more confidence. Master Chia came around and pushed me a few times. I felt completely different than the previous time that I tested, more rooted and grounded. I moved through his pushes with greater ease and effortlessness. He chuckled, as if to say, now let's see what you can really do. He demanded that I perform the advanced movements, and I as I did, he began to lean on my back and yank on my arms. At first, I wanted to confront his force with force, but reminded what I had learned from the tai chi classics, "Don't push the river, let the energy move through you." I relaxed and channeled his force into my center. I
expanded my energy and pushed him backward. He grinned casually and nodded. "Good," he said. I had passed.

I spent four years going back and forth to Thailand. During my third trip, I was asked to be the Chief Editor for all of Master Chia's publications. This was a fantastic opportunity to study and work directly with one of the foremost modern day Masters of Eastern philosophy, tai chi, Taoist yoga, and meditation. I would soon find that I had to pass rigorous tests before I was allowed to write each new chapter or book. Master Chia wanted to make sure that I embodied the practices and principles that I was writing about.

During my trips to Thailand, I would also venture off to different countries in Asia to study with other Masters. I studied bodywork and pressure points in China and Japan. Over the years, I completed two-week silent retreats with nine hours of meditation per day. I meditated for ten days in complete darkness. I trained with tai chi masters in Hong Kong and Indonesia.

Back in the United States, I spent four years studying Chinese medicine and became a licensed Chinese medical doctor and acupuncturist. I wanted to understand the ancient theories and practices that had allowed for such a profound understanding of the human body, mind, and soul.

At the time, I was on staff with Deepak Chopra and facilitated some of his workshops on
Mind/Body Medicine. I completed numerous Yoga Intensives, stood on my head, and could almost get my ankles behind my ears (soccer players have tight hips). I wanted to absorb everything from as many different teachers and disciplines as I could to understand where their teachings merged and validated the insights into life that I was learning.

What I finally realized was that these practices and the Eastern approach to health that I learned for so many years was not about extremes or competition; it wasn't about who could stretch the farthest or whose tai chi form was the best. This was all about an inner awareness and an awakening of inner potential. All of these teachers and traditions have many similarities, but the most important common principle is to maintain balance. One of my teachers told me, "To maintain a garden all you need to do is give it a little water and sunlight each day." He explained that my practice should be the same – a little bit every day. This is what I hope to offer you in my teaching. A little bit of the essential elements…every day.

Read previous PART 1 of the article.