Introducing a new YMAA author, Donivan Blair, bassist for the Toadies and author of Even If It Kills Me: Martial Arts, Rock and Roll | YMAA
Skip to main content
FREE Shipping Order Over $70. (US Only, Conditions apply)    |   Up to 20% Off. Exclusions apply.

Home >> Articles >> Introducing a new YMAA author, Donivan Blair, bassist for the Toadies and author of Even If It Kills Me: Martial Arts, Rock and Roll 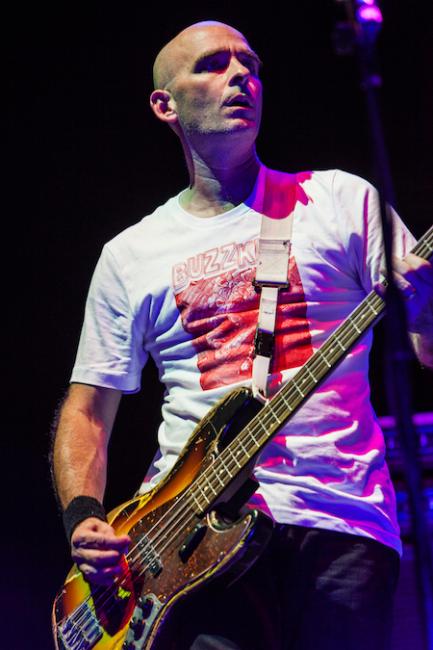 Introducing a new YMAA author, Donivan Blair, bassist for the Toadies and author of Even If It Kills Me: Martial Arts, Rock and Roll

I had the great pleasure of meeting Donivan Blair at the Beach Ball Buzz concert last month in Kansas. I enjoyed the adventure of being back stage in the thick of things. And also the Toadies are a really good rock and roll band. The audience adored them and would have liked to have heard more of their music. They are entertainers extraordinaire.

I had the great pleasure of meeting Donivan Blair at the Beach Ball Buzz concert last month in Kansas. I enjoyed the adventure of being back stage in the thick of things. And also the Toadies are a really good rock and roll band. The audience adored them and would have liked to have heard more of their music. They are entertainers extraordinaire.

In between, the noise of the crowd, and his getting ready to perform, I was able to ask Donivan Blair some interview questions listed below. But first, read the "Preface: Going Back" to get an understanding of why Donivan at age 40 decided to go back and earn his black belt in taekwondo. "Never give up!" is Donivan's mantra.

I walked away. That's what I've felt for all these years. As a kid, martial arts were my first love, my first real obsession. My brother Zach and I wanted to be ninjas when we grew up. We watched old kung fu movies and pounded on each other. Zach shot me in the ear with an arrow. On separate occasions he hit me in the head with a bat and nunchaku—not "numb chucks," goddamn it. I got in my licks too.

Later we took up taekwondo. It's not like there was a ninja school in Sherman, Texas. We loved it though. We could beat the shit out of other kids instead of one another. But our family didn't have much money, and classes became expensive. In time we bowed out. We gave up on being ninjas and took part in real life.

We first found our way in Hagfish, a band my brother and I started in Sherman. We made a few records, traveled the world, and learned about the business. Today Zach plays guitar in Rise Against. Since 2008 I've been with the Toadies. I'm not a rock star. I play bass. Tens of people know me.

At this point you may be saying, "I bought a book by a bass player?" Or even, "Bass players can read?" I know. It's pretty surprising.

After years of making records and playing shows, the Toadies have decided to take some time off. I've gone home to Amarillo. I'm finally going to be in one place for a while, which gives me the opportunity to return to taekwondo. It's always bothered me that I left before really getting good—way before attaining those mystical powers that come with the vaunted black belt.

That is reason enough to do this, but something else is also on my mind. Something about simplifying. I want to return to the days before my life revolved around four strings and arguing with three people about a flat 7. I want to return to a time when I felt free of obligations and I had real, honest hope in my heart. I was a kid, my dad was still alive, and my only real concern was what comic book I should read next.

I'm not a kid anymore. I'm a middle-aged man trying to come to grips with being a middle-aged man. I'm not as fast as I used to be. It takes longer for the injuries to heal. I have to eat more bran.

But if I don't do this now, when will I? Never. That's when. I am a forty-year-old white belt. I'm going back.

Here are the interview questions with Donivan Blair from the Beach Ball Buzz concert:

Q. What made you want to start writing?

A. Honestly? My wife. She has been saying for years that I should try it, so just to prove her wrong and shut her up I did. And now I have a book deal.

Q. Who are some of your favorite authors?

Q. How did you end up working with YMMA?

A. I sent my manuscript (if you can call it that) to David Ripianzi, publisher, and he got back to me with a note to speak to my editor T.G. LaFredo. Much like the guy falling from a building, when he's asked how it's going he replies "So far so good."

Q. What is your reading background?

A. According to my mom my first attempt at reading was my collection of "Little Golden Books," upside down, when I was on my training potty. I was trying to be like my father. After that I discovered the Conan books at the age of 13 by Robert E. Howard, (fellow Texan) and have not stopped reading since.

A. I began in taekwondo at ten years of age and wanted to complete what I started. Getting a black belt is not a finish line so to speak, but it was a longstanding goal of mine. Today, I practice in a shed behind my house. On tour, I stop at dojangs across the country. 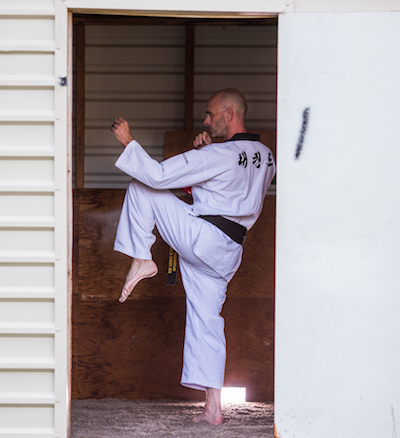 Q. How long has this book taken to write?

A. I began on the day of my first taekwondo class four years ago. It was clear another opportunity would never reveal itself and I wanted to start a journal to document the process, just in case.

Q. You've mentioned you're a comic book fan. Would you classify yourself as an actual nerd then?

A. Oh definitely. Some aspects of your personality are just ingrained in you. No getting out of it. My brother got the cool genes; I got the ones that allow you to breeze though school without taking notes.

Q. Do you hope to continue writing?

A. Yes, there is no way I will stop, regardless if anyone will want to put out future writings of mine. I've now found a way to express myself that music has never allowed me to do.

Q. Have you published any articles?

A. Yes, I published a column in Taekwondo Times in 2014 and 2015. And recently an article in Shotokan Karate Magazine

Q. I understand you have had many past occupations in addition being a bassist for the Toadies. Care to mention them?

A. Sure, I've had a lot of different jobs. My job when I am not touring is driving a food truck. I've also been a barista, music data coordinator, coffee shop manager, technical help desk and assembler of tapes and CDs. I think all these jobs helped shap me for being a bassist and a writer. Meeting different people, I learned different views.

Q. How would you sum up your book, Even If It Kills Me: Martial Arts, Rock and Roll, and Mortality.

A. The book deals with my decision to attain my black belt in taekwondo. It took me three years to accomplish this. I traveled the USA five times over, recorded three albums of original music, and never faltered in my training. I hope this book will entertain and inspire others of my age group to either take up martial arts or pursue any other endeavor they previously thought out of reach.

Q. The book has an interesting title, Even If It Kills Me: Martial Arts, Rock and Roll, and Mortality. Care to comment?

A. I think the name of the book is who I am, it's the fusion of rock and roll and taekwondo. It's cool.