Qigong Theory—The Roots in the Garden | YMAA
Skip to main content
FREE Shipping Order Over $70. (US Only, Conditions apply)    |   Up to 20% Off. Exclusions apply. 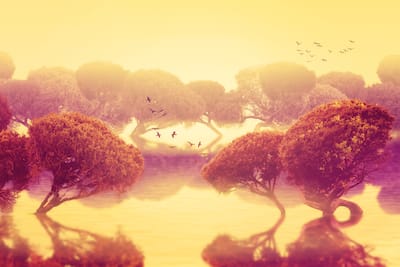 Qigong Theory—The Roots in the Garden

Many people think that qigong is a difficult subject to comprehend.  In some ways, this is true.  However, you must understand one thing: regardless of how difficult the qigong theory and practice of a particular style are, the basic theory and principles are very simple and remain the same for all of the qigong styles.

Many people think that qigong is a difficult subject to comprehend.  In some ways, this is true.  However, you must understand one thing: regardless of how difficult the qigong theory and practice of a particular style are, the basic theory and principles are very simple and remain the same for all of the qigong styles.

The basic theory and principles are the roots of the entire qigong practice. If you understand these roots, you will be able to grasp the key to the practice and grow.  All of the qigong styles originated from these roots, but each one has blossomed differently.  It is impossible to discuss all the basic qigong ideas, but it is my hope to offer beginners the key to open the gate into the spacious four-thousand-year-old garden of Chinese qigong.

In order to use qigong to maintain and improve your health, you must know that there is qi in your body, and you must understand how it circulates and what you can do to ensure the circulation is smooth and strong.

Qi is energy; it is a requirement for life. The qi in your body cannot be seen, but it can be felt. This qi can make your body feel too positive (too yang) or too negative (too yin).

Imagine that your physical body is a machine and your qi is the current that makes it run. Without the current the machine is dead and unable to function.  For example, when you pinch yourself, you feel pain.  Have you ever thought, "How do I feel pain?" You might answer that it is because you have a nervous system in your body that perceives the pinch and sends a signal to the brain.  However, there is more to it than that.  The nervous system is material, and if it didn't have energy circulating in it, it wouldn't function.  Qi is the energy that makes the nervous system and the other parts of your body work.  When you pinch your skin, that area is stimulated and the qi field is disturbed. Your brain is designed to sense this and other disturbances, and to interpret the cause.

Chinese doctors discovered long ago that the human body has twelve major channels and eight vessels through which the qi circulates.  The twelve channels are like rivers that distribute qi throughout the body, and also connect the extremities (fingers and toes) to the internal organs. I would like to point out here that the "internal organs" of Chinese medicine do not necessarily correspond to the physical organs as understood in the West, but rather to a set of clinical functions similar to each other, and related to the organ system.  The eight vessels, which are often referred to as the extraordinary vessels, function like reservoirs and regulate the distribution and circulation of qi in your body.

When the qi in the eight reservoirs is full and strong, the qi in the rivers is strong and will be regulated efficiently.  When there is stagnation in any of these twelve channels or rivers, the qi that flows to the body's extremities and to the internal organs will be abnormal, and illness may develop.  You should understand that every channel has its particular qi flow strength, and every channel is different.  All of these different levels of qi strength are affected by your mind.  For example, when the weather is dry, the qi in the lungs will tend to be more positive than when it is moist.  When you are angry, the qi flow in your liver channel will be abnormal.  The qi strength in the different channels varies throughout the day in a regular cycle, and at any particular time one channel is strongest.  For example, between 11 a.m. and 1 p.m. the qi flow in the heart channel is the strongest.  Furthermore, the qi level of the same organ can be different from one person to another.

When a person is sick because of an injury, his qi level tends to be either too positive (excessive, yang) or too negative (deficient, yin). A Chinese physician would either use a prescription of herbs to adjust the qi, or else he would insert acupuncture needles at various spots on the channels to inhibit the flow in some channels and stimulate the flow in others, so balance can be restored. However, there is another alternative and that is to use certain physical and mental exercises to adjust the qi. In other words, use qigong.

Since the 1970s Western medicine has gradually begun to accept the existence of qi and its circulation in the human body.  Several studies indicate that what the Chinese call "qi" is the bioelectric circulation in the body.  It is now generally accepted by Western medicine that imbalance of the bioelectric current is a cause of many illnesses.  Modern science is now learning many things that will help us to better understand qigong and will also increase Western medicine's willingness to accept the validity of qigong.

If qi is the bioelectricity circulating in the human body, in order to maintain the circulation of qi or bioelectricity, there must be an EMF (electromotive force) generating an electric potential difference.  It is like an electric circuit, which must be hooked up to a battery or other source of EMF before there can be a current.

There are two main purposes in qigong training: first, to maintain the smooth circulation of qi (bioelectricity), and second, to fill up the qi vessels (qi reservoirs) with qi. In order to have smooth circulation of qi we must regulate the electric potential difference that controls the qi flow, and also remove all sources of resistance in the path of the circulation. In order to fill up the qi vessels, we need to know how to increase the charge in our "battery."

At this point you may ask, "If we keep increasing the EMF of the battery, that is, the qi reservoirs, won't the excess of qi flow overheat the circuit and make it too yang?"  The answer is yes.  This can happen.  However, your body is different from a regular electric circuit in that it is alive and can change.  When the qi flow becomes stronger, your body will react and build itself up so it can accept this new qi flow. Qigong should be trained slowly and carefully so that, as you build up the qi stored in your channels, your body has time to readjust itself.  All of this also makes your body stronger and healthier.

You can see that the key to qigong practice is, in addition to removing resistance from the qi channels, maintaining or increasing the qi level (EMF) in the qi reservoirs (battery or capacitor). What are the energy sources in our daily life that supply energy to our bodies, or, expressed differently, what are the sources by which the EMF can be increased in the body's bioelectric circuit, which would increase the flow of bioelectricity? There are four major sources:

In taiji qigong, the mind and the movements are the two major sources of EMF, though the other two sources are also involved.  For example, when you practice in the early morning, you can absorb energy from the sun.  When you meditate facing the south in the evening, you align yourself with the earth's magnetic field.  It's also advisable to eliminate greasy and other undesirable foods from your diet, and, if possible, to practice in the mountains where the air is fresh and clear.

The above is an excerpt from Tai Chi Qigong: The Internal Foundation of Tai Chi Chuan by Dr. Yang, Jwing-Ming.