Discovering Ancient Secrets for Modern Life | YMAA
Skip to main content
FREE Shipping Order Over $70. (US Only, Conditions apply)    |   Up to 40% Off. Exclusions apply. 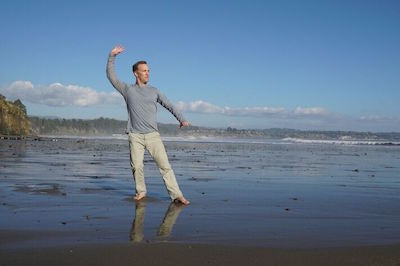 During college my greatest teachers were not professors, and the greatest lessons were not revealed in the classroom. The University of California at Berkeley, which I attended, was home to more than 20 Nobel Prize winning teachers, had an unprecedented research reputation, and was the number one public university in the country. Still, the wisdom I discovered came from teachers without doctorates who taught in a small building across town that I would never have known existed if I had not been lead there.

During college my greatest teachers were not professors, and the greatest lessons were not revealed in the classroom. The University of California at Berkeley, which I attended, was home to more than 20 Nobel Prize winning teachers, had an unprecedented research reputation, and was the number one public university in the country. Still, the wisdom I discovered came from teachers without doctorates who taught in a small building across town that I would never have known existed if I had not been lead there.

When I arrived on campus for my freshman year I had no idea what lay ahead and was just trying, like the thousands of other students, to handle the newfound freedoms that I had living for the first time away from the watchful eyes of my parents. I quickly realized that smart, disciplined high school students can go a little overboard when finally let loose—and I was no exception.

By my junior year, I was trying to complete my psychology degree, play Division I soccer, and maintain a full social calendar. Part of me was having the time of my life; yet, another part of me was stressed out, unhappy, over-stimulated, and yearning for something deeper and more meaningful. I knew that my psychology classes and studying the behavior of rat's in mazes were unlikely to reveal the secrets of happiness. My grades were starting to slip, I was sitting on the bench on the soccer team, and my girlfriend had just broken up with me. I had reached the ocean bottom of my college life: I had a choice to make, become a better swimmer, or drown in my self-pity.

It was about a week later that circumstances threw me a life-preserver. I was sitting in class as usual, when I noticed a woman sitting a few seats away from me. To my surprise she was not taking any notes. Imagine a room of four hundred students frantically scribbling, straining to write down every detail, while she just sat there, spine straight, hands folded, keenly observing
the professor. I smiled with amazement and disbelief. How could you actually do that, go to class and not take notes? Berkeley was highly competitive and intellectually challenging. Students worked extremely hard to grasp the information. After a few weeks of watching her, I finally introduced myself.

After a brief conversation, I asked her how she managed to go through a class like Statistics and Industrial Psychology without putting a pen to paper. Her answer was simple, "The Tao." I looked at her like a dog cocking its head when it hears a funny sound. What? She offered to escort me to a class at a local Tai Chi studio that gave lectures on Taoism, Zen, Chi, and Yoga. She explained that there was a common thread that linked all these disciplines and how they could be used for practical purposes, like remembering everything in a lecture without taking notes. She explained to me that before her training, she was a stress case, a B student at best. Now, she was the picture of mental calm, getting straight A's, and feeling energized every day. It sounded too good to be true.

We walked into an ordinary looking house on the north side of campus, up in the hills, with a view of the San Francisco Bay. The living room was large and spacious with nothing but cushions on the floor. There were about twelve to fifteen students sitting in the room. The teacher, Master Sun, smiled as we walked in and sat down. He was bald, wore loose pants and a white t-shirt, and had warm radiant eyes. The strange thing was that I didn't feel weird walking into this room, even with fifteen curious eyes on us. There was a tranquility and peacefulness about the space.

The class began with deep breathing exercises, progressed to vigorous stretching, and ended with flowing movements. Trying to hold some of these postures required tremendous abdominal strength and balance. I was sweating as if I was sprinting through a soccer game on a hot day. The flowing movements required a dexterity that I was completely unfamiliar with. I was not used to moving my body that slowly and coordinating all the movements from the center of my body. Yet, by the end of class, my body felt completely different. My hands and arms were tingling, my head was light, as if all my thoughts were put to rest, and I could feel an inner power coursing through my veins.

After the class, Master Sun lectured on the mind. He said something that I still remember to this day. "There is much more to the mind than just thinking. When your mind is silent, the Universe surrenders." Maybe this was a clue to how my classmate was able to get straight A's without taking notes.

During the off season of soccer, I trained diligently at the center. The students here were quite different than the university students; it wasn't about getting grades or competition, it was about going deeper into oneself. I learned the classic 108 Tai Chi moves. I took yoga 3 times a week, and I learned to meditate. Looking back, these were the most important life skills I acquired in the five years I spent at Berkeley.

As Master Sun emphasized in every class, Tai Chi is the art of effortless power; by learning to go with the flow of life, the struggle ceases. Now, this sounded great in theory, but I really didn't believe it in my gut. My whole life, I had worked hard in both school and sports to succeed. Effort, tenacity, and perseverance were all principles I could count on to get me through. But the more I trained in Tai Chi, the more I was beginning to witness effortlessness in my own life. In fact, during the next season, my soccer playing was transformed. I went from mediocre to outstanding. My endurance, speed, agility, and focus were all dramatically different. It was weird, like I had grown another lung. Not only was I faster, but I could play much longer with more stamina. The benefits extended beyond my athletic ability. I was getting better grades without any extra studying. I was still taking notes in class, but my focus was noticeably improved.