Essential Elements of Metarobics and Tai Chi for Therapy | YMAA
Skip to main content
FREE Shipping Order Over $70. (US Only, Conditions apply)    |   Up to 40% Off. Exclusions apply. 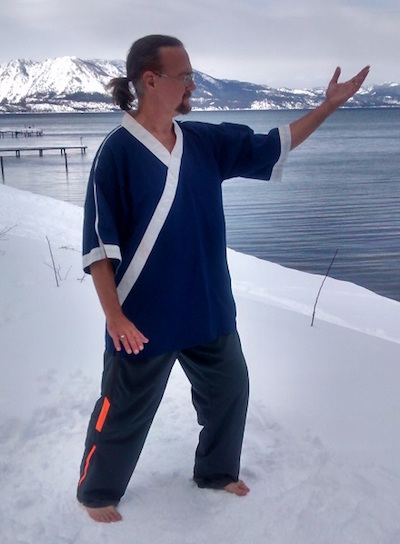 Essential Elements of Metarobics and Tai Chi for Therapy

Tai chi is fast becoming a popular exercise, resulting in a wide range of teaching methods. Some changes are beneficial, but others may reduce or even eliminate the unique benefits of tai chi. This chapter provides a brief overview of the development of tai chi for health and discusses what to look for when choosing a class to maximize the benefits of tai chi from a Metarobic and structural perspective.

Tai chi is fast becoming a popular exercise, resulting in a wide range of teaching methods. Some changes are beneficial, but others may reduce or even eliminate the unique benefits of tai chi. This chapter provides a brief overview of the development of tai chi for health and discusses what to look for when choosing a class to maximize the benefits of tai chi from a Metarobic and structural perspective.

"Dr. Paul Lam is one of the pioneers who has worked hard to make tai chi user friendly for health. Dr. Lam started tai chi over thirty years ago after graduating from medical school. As a teen he suffered from osteoarthritis, and by the time he graduated medical school his condition was so debilitating that he could not even carry a briefcase. Since then tai chi has changed his life. His arthritis became well controlled, and he attributes his good health and positive attitude to his dedicated tai chi practice." —Tai Chi for Health Institute website

Tai chi is the main focus of this article, since it is more common and more familiar to people in the United States than qigong. But both forms of these exercises share many commonalities, including slow, relaxed movements, gentle stretching of the limbs, and focus on deep breathing and good postural alignment.

There are many colorful histories and legends regarding the origins of tai chi, but the essence behind the slow, spiraling movements lies in its origin as a martial art. The slow movements permitted a level of mastery over muscle tension and body structure that allowed more efficient use of muscular power, as well as increased sensitivity in controlling the movements of a "stiffer" opponent. The person who was more relaxed could feel the tension in the other person, allowing anticipation of movements and an ability to redirect attacks. Once a tai chi master made contact with another person, he had total control over his opponent. Tai chi chuan literally translates as "grand ultimate fist," describing its effectiveness in combat when practiced as a martial art.

Over time people came to realize that tai chi was a valuable health exercise as well, since deep breathing and removing tension from the body have many health benefits. Because this is also the goal of many qigong exercises, tai chi has become classified as a form of qigong, and has since been popularized primarily as a health exercise.

The Breath and Pace in Tai Chi

The breath is at the core of many of the health benefits of tai chi. Many people tend to breathe shallowly, expanding the ribs in what is called chest breathing, as opposed to diaphragmatic breathing, which involves expanding the stomach and activating the rib muscles and diaphragm. Most books on running or aerobic exercise are quick to point out the benefits of diaphragmatic breathing for increasing oxygen in- take. Diaphragmatic breathing is a hallmark of tai chi, which focuses on expanding the chest and abdomen to maximize inhalation of air. Indeed, some tai chi instructors also say to expand the back as well, which can result in expansion of the posterior ribs. During these exercises, breathing is done through the nose rather than the mouth, assuming the nasal passages are clear. Nose breathing is considered healthier, since it prewarms and moistens the air as it comes through the nasal passages and helps the body to trap and eliminate contaminants from the air before it reaches the lungs. Breathing through the mouth can result in more frequent respiratory infections. The Chinese have an interesting saying on this: "You would not try to stuff food up your nose, so why would you breathe through your mouth?"

Shallow breathing moves only a small fraction (approximately 0.5 liters) of the lungs' total air volume into and out of the body with each breath. Deep breathing can increase lung capacity and can increase air volume to three to five liters, depending on the lung capacity of the individual. Being in its infancy, the field of Metarobics is ripe for research to determine exact effects. But in the meantime, the observations presented in this book provide a good start. If you find yourself completing several movements with one breath, slow down each movement to match the breath.

The goal is to completely fill the lungs during the first half of each movement and to completely empty the lungs by the end of each movement as slowly as possible without feeling short of breath. You do not need to try to consciously match the breath to the movement—with time the breath will correspond naturally, without trying to force it. There is also some variation between movements.

Moving slowly, while focusing on being relaxed and breathing fully from the abdomen and chest, without overdoing it, will result in a natural rhythm without strain. If you feel you are running out of breath when going slow, speed up the movements. Alternatively, some practitioners suggest taking more than one breath during each movement, breathing in and out during the first half of a movement, and then again during its completion. For health, the important part is being slow and relaxed, with full, comfortable breaths. Overall, I tell my students not to worry about the breath, since it tends to follow naturally with the movements. Over time your body will fall into a natural rhythm.

For martial practice, slower and faster paces may be used to train the body for specific goals for self-defense. For health, fast paces can enhance aerobic conditioning, but a slower pace enhances greater relaxation of muscle tension. A slower pace also works on a different perspective of balance. For health purposes, the guidelines for a slower pace have demonstrated the greatest increase in blood oxygen saturation and Metarobic effects.

Another key element to maximize diffusion of the blood and oxygen throughout the body, as well as to develop a greater level of relaxation in the mind and body, may relate to the way the weight is carried by the legs. During almost every movement in tai chi, the goal is to be "single-weighted," that is, the weight of the body is essentially balanced entirely over one leg or the other, shifting back and forth as a person transitions through the movements.

When the weight of the body is balanced equally between the legs, a person is considered to be "double-weighted." The reason for being single-weighted lies in the martial origins of tai chi, but the practical effect for health is that by letting the weight of the body shift entirely to one leg (for example, the right leg), the rest of the body can be allowed to relax entirely, including the left leg (the "empty" leg), hips, torso, shoulders, arms, neck, and head. As the movement transitions through to the opposite leg, for example, to the left leg, the other side relaxes. An analogy is often made to the idea of imagining one leg being full of water, and the water pouring into the "empty" leg as one shifts through to the next movement, until the full leg becomes empty, and the empty leg becomes full.

Balance and Knees, the Best of Both

"After two brain surgeries, I had constant severe headaches and suffered from loss of coordination and severe dizziness to the point of passing out. A friend told me that tai chi had improved her balance, so I decided to try it. Within two weeks the dizziness disappeared so much that I did not need to use the transderm scop patch I was dependent on. The headaches became less frequent and my coordination got better. Now I rarely experience any headaches. I also had torn the medial meniscus cartilage in both knees. I had the left knee operated on. I could not walk without knee braces, and could only walk slowly. Now I only wear the braces when I do tai chi. I can walk much faster and can get up and down the stairs to the subway with no problem or loss of balance." —Victoria (From "Testimonials," Tai Chi Chuan Center website)

This transition between empty and full occurs throughout the entire form. Essentially, tai chi is the act of balancing on one leg and then the other while relaxing the opposite leg and the entire body. This is the reason tai chi is such a valuable exercise for enhancing balance, and why it also works to strengthen the knees, providing the knees are kept aligned with the feet and are not overextended, to prevent knee strain.

Weighting one leg, with the leg bent, also increases the heart rate slightly, although not to what is considered a moderate aerobic level. Research will need to determine if the weighted leg "robs" the body of blood oxygen saturation, since levels are lower during tai chi compared to standing qigong poses with the legs straight. On the other hand, the weighted leg may enhance blood flow and diffusion through-out the body through osmotic pressure, more so than if the form were practiced in a standing position. During measurements of tai chi and those qigong exercises that are performed with a bent-kneed stance, blood oxygen saturation increases one to two points. During the standing poses of qigong, it tends to increase two to three points.

It is possible that the slightly faster heart rate from the bent-kneed stance of tai chi may have particular benefits beyond strengthening the knees and legs. Further research is needed to determine if pure qigong exercises such as the eight treasures provide even greater benefits, being focused for health as opposed to adapted from a martial routine. Try both if you have the time, since both have been proven to have benefits, and make your own observations. If you have a specific medical condition, your doctor may have recommendations for practice as well.

The above is an excerpt from Mindful Exercise: Metarobics, and the Healing the Power of Tai Chi by Peter Anthony Gryffin, PhD