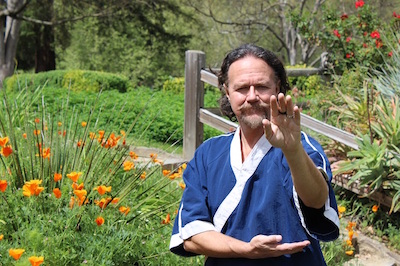 Tai chi and similar exercises are yielding phenomenal results for a large variety of health concerns. When I began collecting case stories, I was amazed at the number of people who have benefited from these exercises, often in dramatic ways. That tai chi and various qigong exercises increase blood oxygen saturation indicates that it is no coincidence that the Chinese word "qi" (pronounced "chi") is so strongly associated with these exercises. Despite qi's common association with the metaphysical and energy work, at its most basic level qi is best understood from its literal translation as "air."

Tai chi and similar exercises are yielding phenomenal results for a large variety of health concerns. When I began collecting case stories, I was amazed at the number of people who have benefited from these exercises, often in dramatic ways. That tai chi and various qigong exercises increase blood oxygen saturation indicates that it is no coincidence that the Chinese word "qi" (pronounced "chi") is so strongly associated with these exercises. Despite qi's common association with the metaphysical and energy work, at its most basic level qi is best understood from its literal translation as "air."

Pacemaker-Free through Tai Chi
"I had to have a pacemaker due to bradycardia. I was told that I would need a pacemaker the rest of my life. I became depressed, gave up running, and began using antidepressants. A year later I decided to try tai chi. Initially I could barely finish a class, but within two months I noticed improvements. I returned to my cardiologist, and was told that my heart was now regulating normally, and that I no longer needed the pacemaker. I am now off of all medications for depression and hypertension as well. I am also now running again."—Ted (Personal account)

Experiences with Language and the Mysteries of Qi

In most Chinese-English dictionaries (such as the Oxford Chinese Dictionary) the Chinese word "qi" is directly translated as "air." Some Chinese-English dictionaries take into account cultural aspects of the language. One dictionary even states that the concept of qi is unique to Chinese culture and cannot be translated. This brings us back to the question of qi, which is the basic attribution behind the benefits of exercises such as tai chi and qigong. In traditional Chinese medicine, and in much of the tai chi community, the word "qi" is typically translated as "vital energy." Vital energy is a rather vague term but does, however, reflect the role of oxygen-based metabolism in all of the functions of the body, including thinking, digesting, and movement, and even in healing and physical repair of the body. Tai chi is considered a form of qigong due to its slow movements and the deep-breathing component. Qigong, with "air" as the root of qi, and "gong" as "cultivation" or "work," can be translated as "breath cultivation," "breath work," or even "breathing exercise." As such, qigong can include a wide variety of exercises.

The realization of the literal translation of "qi" was one of the occurrences that prompted my understanding that efficient oxygen use was important for the health of the body. Despite its literal translation, over the years the word "qi" has come to be used for everything from "vital energy," as mentioned above, to being described as a "mystical force which permeates the universe."4 Qi is frequently relegated to the same mystical realm as the "force" of Star Wars fame. It wasn't until my experience teaching English at a Chinese school that I realized that the basic Chinese view of qi is entirely different from common perceptions based on movies and myth, one that has profound implications for a new field of health and fitness.

While teaching English at the Chinese school, I used the word "qi" as an example for something relating to the spirit. The class met my comments with confused looks, so I asked what confused them. It turned out to be the word "qi," which to the class simply meant "air" or "oxygen." It would be like mistaking oxygen for the word "spirit," and saying to a group of young Catholics, "In the name of the Father, the Son, and the Holy Oxygen."

The students in the class elaborated on the word "qi," including a point that I had been dimly aware of but only now realized was particularly significant. The Chinese character for "qi" represents steam, or air, rising from cooked rice. I looked in a Chinese-English dictionary, and sure enough, the first definition of "qi" was "air."

The next time I met with my Chinese tai chi teacher, I asked about this concept of qi as simply "air" or "oxygen." He explained that in most cases, qi does simply mean the air we breathe, but occasionally it can refer to other things pertaining to spiritual elements, or the nature of energy. In much the same way, the word "pneuma" was used by the ancient Greeks to describe the spirit, yet is also the root for "air" in many English words, including the pneumatic (air) pump. Ironically, in Chinese history, according to Zhang Hu Yuan and Ken Rose in their book A Brief History of Qi, the word "qi" was historically used to describe air, clouds, and the atmosphere. It was not until more modern times that it became associated with more esoteric aspects.

The second incident that further prompted my realization that qi- or oxygen-based exercises may be considerably more involved than just blood pumping through the cardiovascular system came from an article I read in the Los Angeles Times over fifteen years ago. The article detailed the use of a "vibrating machine" by researchers at the Rehabilitation Institute of Michigan to enhance circulation, increase bone density, and reduce muscle spasms.

"Following a mild stroke, I suffered nerve damage, loss of feeling on my left side, and I had difficulty with my balance. I had been doing therapy and had seen some improvement, but it was not until I tried tai chi that something remarkable began to occur. I began to feel a tingling sensation in the fingers of both of my hands, including my left side. The class also helped with my balance and overall physical and mental health." —Ted (From Tai Chi for Health Newsletter)

Quadriplegics, being bedridden, often suffer from bedsores and poor blood circulation, and need to be turned, massaged, and manipulated on a regular basis. This is another clue that movement is a necessary requirement for proper blood and oxygen circulation. To prevent the problems associated with being bedridden, the researchers placed the patients on a large platform that would vibrate and shake up the body, similar to the way a can of paint is shaken in a paint mixer at a hardware store.

The idea was that the vibrations would distribute blood and oxygen throughout all of the cells and capillaries in the body, similar to the way color is distributed throughout a can of paint. And it worked, with some surprising results. Not only did the treatment help eliminate bedsores and poor circulation, but the patients reported what had previously been considered an impossibility—feelings in the extremities of their arms and legs, an indication of nerve regrowth. This study indicated to me that enhanced blood diffusion can result in significant health gains.

The vibrating machine has a parallel in various Chinese health exercises, forms of qigong that involve shaking the body. Many qigong exercises are based on "vibrating" the body through various exercises. As a preliminary to tai chi, one common exercise is to vibrate the body through a variety of methods, such as shaking the body up and down very rapidly, or rising up on the toes and then dropping the body so that it "jiggles," or vibrates.

As the body is vibrated, a tingling is felt in the fingers, hands, and arms, and sometimes throughout the body, which is seen as enhanced qi flow. This tingling is also felt during tai chi and various qigong practices. Thinking about this brought me to the realization that slow movements of the body in exercises such as tai chi and qigong may be a health exercise as important in its own right as aerobics and strength conditioning.

Tai Chi Saved My Life
"Dr. Roger Jahnke, author of The Healing Promise of Qi, recounted the story of a man with malignant brain cancer. A network of tendrils entwined the brain and made surgery impossible. The man went to China, where he learned and practiced tai chi and qigong, in conjunction with herbal and other treatments. A year later, the tumor had shrunk and became benign. Surgeons were able to remove what was left of the tumor".

As a result of the battle for blood between the stomach and muscles during intense exercise, the body experiences painful cramps instead of the pleasant tingling that occurs as oxygen diffuses throughout the entire body during tai chi and qigong practice. It should be noted, however, that tai chi and qigong practitioners also recommend practicing on an empty stomach. Practicing with a full stomach won't result in stomach cramps, but doing these exercises on an empty stomach may optimize blood diffusion throughout the entire body. Aerobic exercise is beneficial in that the circulatory system responds by growing stronger, with an increase in blood vessels, but this does not mean an increase of blood and oxygen at all levels or to all areas of the body, particularly at the cellular level within the organs.

The many healing benefits of tai chi are supported by a growing body of scientific research, testimonials, and news accounts. When I first started tai chi practice over twenty-five years ago, I read an account of an autopsy performed on an older person (whom I believe the article stated was ninety or so) who had been a lifetime tai chi practitioner. The article stated that the tai chi master's organs were more typical of those of someone in their thirties or forties. As one ages, a variety of changes occur within the body, including stiffening of the heart as well as increased arteriosclerosis. The lungs also lose elasticity, and the prostate enlarges, while bones can become brittle.

Tai Chi and the Gift of Life

"I was diagnosed with terminal cancer. The doctor gave me two months to live. I suffered a lot of pain and I was so weak that I could not stand the chemotherapy or the radiation therapy. My hair dropped out. I looked into the mirror and I saw a ninety-year-old woman, even though I was only forty-nine years old. I could not eat; I hardly drank anything. Then I heard about qigong. I registered for a class, and began practicing religiously twice a day. In three weeks, I was able to eat properly and sleep like a log. Within a year the cancer was gone. Now I am seventy-five years old."

The sympathetic nervous system helps regulate the body, activating it in response to stress—the fight or flight response. Long-term activation of the sympathetic nervous system can have negative effects on the body, including increased blood pressure. Slower rates of breathing have been shown not only to reduce blood pressure, but also to result in an increase in arterial oxygen saturation compared to normal breathing. A focus on qi, air, the breath—however it is termed—is a key player in health and Metarobic benefits.

The above is an excerpt from Mindful Exercise: Metarobics, Healing, and the Power of Tai Chi by Peter Anthony Gryffin, Phd.