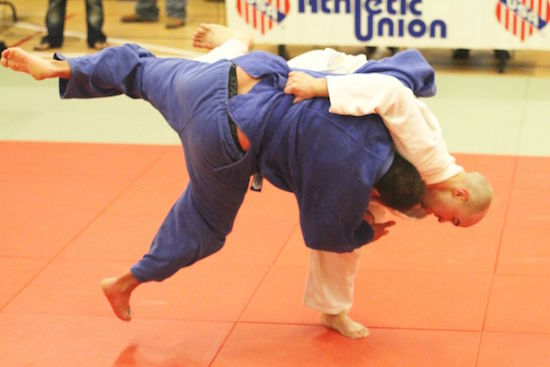 Is judo really the "gentle way?" In the popular meaning of the word, judo certainly isn't anything close to being gentle. To paraphrase the great martial arts writer Donn Draeger; "Judo isn't gentle." And while judo isn't gentle in the more common use of the word, it's certainly efficient; and because it's efficient, it's effective

Is judo really the "gentle way?" In the popular meaning of the word, judo certainly isn't anything close to being gentle. To paraphrase the great martial arts writer Donn Draeger; "Judo isn't gentle." And while judo isn't gentle in the more common use of the word, it's certainly efficient; and because it's efficient, it's effective

Throwing another human being hard onto the mat or ground isn't gentle. Cranking on an opponent's arm or neck or holding him on his back and not allowing him to get up sure wouldn't qualify as gentleness either. In reality, judo is a rugged activity and one of the most demanding sports people engage in. This can be attested to by anyone who has seriously studied and practiced judo for any significant length of time.

The name "judo" has always been paradoxical to me. On the one hand, we call this thing "gentle" and on the other hand, we slam an opponent to the mat and that certainly isn't gentle. So, what is judo?

What judo is, in both theory and application, is a martial discipline based on the most efficient use of a person's mind and body. It's a pragmatic way of applying the principles of adaptability and flexibility in the context of physical education, sport and self-defense. This means that judo uses strength to its most efficient means, yielding when necessary and then applying force when necessary, and utilitarian in nature. Gentle is, indeed, one of the meanings of the word "ju" (as are the words adaptability and yielding as well), but to imply that "ju" is gentle or soft takes "ju" too far out of context and has implied that the activity and the sport of judo is gentle, which it isn't.

While it's certainly true that judo's founder, Professor Jigoro Kano (1860-1938), referred to judo as "gentle" more than once in his writings, it should be noted that he made it clear that he was speaking in terms of tactical application. Basing his approach on proven Chinese and Japanese military theories, "gentle" in this context refers to flexibility and fluidity of movement as opposed to a "hard" or rigid approach to winning a battle. A military unit is either "gentle" or flexible and adaptable in its movements or it's "hard" or inflexible and unable to adapt to the situation at hand.

This "gentle" approach permits the fluid application of tactics; yielding when necessary and attacking when the time is right and using an opponent's strength against him and taking advantage of it.  In this sense, as it applies to us, the person who has the ability to adapt to, and ultimately control, the situation has an advantage over the person who rigidly refuses to change as the conditions demand. So, judo isn't gentle as in the context of being soft or weak, but to the general public, this activity based on pragmatic and efficient principles that we call judo is simply viewed as "gentle."

The concept of ju also implies a lot more than simply yielding or using an opponent's strength against him.  It's also using one's own strength in the most efficient way possible under the given circumstances or situation.  It's being prepared, and willing, to use strength when necessary.  Not brute force, but force that is best suited to getting results. Geof Gleeson, in his book All About Judo contends that ju has an even wider meaning. Control of a situation and how to best assess a situation are factors that make up ju. These have direct implications to success in judo.

A successful judoka must make the best assessment of a situation (through coaching, training and experience) and then control the situation so that it's advantageous to him.  Professor Kano was influenced greatly by his training in the Tenjin Shinyo school of jujutsu where the body is subordinate to the mind, which makes it necessary for the mind to be flexible and able to adapt to any given situation; which, in turn, enables the body to be flexible and able to adapt as well.

Ju is the Efficient Use of Power

The most efficient use of power is a necessary component in the application of technical skill in judo. This efficient use of power translates in effective results and does so with a high rate of success. Power should not be confused with brute strength. Power is how we measure work; it is force multiplied by the distance that an object is moved and for our purposes, the object being moved is a human body when being thrown by a judo technique.

As Donn Draeger stated in his book Modern Bujutsu and Budo; "When the principle of ju is wrongly interpreted, there is an obvious conflict between theory and practice. In many ways, these erroneous opinions still influence modern day judo…"  One of these erroneous opinions is that physical strength or fitness isn't necessary for "good technique." On the contrary, good technique relies on speed, strength, flexibility, excellent coordination and cardio-vascular fitness among other things. Good technique doesn't develop in a vacuum. It's the result of hard physical and mental effort.  A physically fit body will have better judo technique than a body that's not physically fit in the same way a physically fit body in any other sport or physical activity has a decided advantage.

Ju Relies on a Sound and Fit Body

Central to the principle of ju is the concept and application of kuzushi. Kuzushi is the word that describes the most efficient (and as a result, most effective) use of a person's body movement. When applying kuzushi, the judoka breaks his opponent's balance and posture by controlling the opponent's movement. How well a judoka controls the movement of his own body and the movement of his opponent's body determines how successful he applies a judo technique.

For the principles of ju and kuzushi to be effective, the person applying them must be physically fit enough to efficiently apply them. The closer two contestants are in skill, the one who is better conditioned will win. Conversely, the closer two contestants are in fitness and conditioning, the one who is more skillful will win. This illustrates how power and skill are inter-dependent and are fundamentally part of ju and the application of skill. Another critical factor in controlling movement and the concept of ju is how well the athlete maximizes the power he has and transfers it efficiently to his technical skill.

In actuality, this is exactly what Professor Kano was getting at in his description of ju. For example, a trained and fit 135-pound athlete will not be as physically strong or powerful as a trained and fit 235-pound athlete, if for no other reason than the smaller athlete cannot generate enough force based on his smaller physical size. However, if the smaller athlete maximally and efficiently transfers his power to his technical ability and does so better than his larger opponent, he will be better able to better perform his technical skills and possibly beat his larger opponent. In other words, the smaller athlete as Teddy Roosevelt said, "does the best he can with what he has and where he's at." This advice from Teddy Roosevelt is sage advice for all judoka.

Ju is the most efficient use of physical and mental energy because it is adaptable, flexible and pragmatic. This is why judo has stood the test of time. Ju is the efficient application of power (or, as Professor Kano explained, it is "directed energy"). According to Donn Draeger in his book Modern Bujutsu and Budo, Professor Kano coined the phrase Seiryoku-Zen'yo to explain the principal basis of his invention, Kodokan Judo. This phrase means "the best use of energy" and is, in both theory and application what judo is.

Simply using the vernacular use of the words "gentle" or "soft" does not accurately portray or do justice to this underlying and rational concept of ju. Professor Kano elaborated on the concept that ju is more than simply being gentle. He taught that for the purposes of throwing an opponent, sometimes the more direct principle of leverage is more important than giving way. According to Professor Kano's writings, judo's true definition is applying the most efficient use of mental and physical energy.  Professor Kano was an intelligent and innovative man and his concepts of ju and kuzushi reflect his innovative brilliance. Ju was, and remains, the central theme of his invention in 1882 and he believed in the concept so much that he named his invention judo, the "Way or Philosophy of Ju."

Judo is pragmatic, adaptable and functional. Without a doubt, the concept of ju implies a functional application of using what it takes to get the job done. It's utilitarian in nature.  Using an opponent's strength, movement, balance, mental capacity, emotional state or anything else against him and using your own strength, movement, balance, mental capacity, emotional state, knowledge of the rules and anything else to give you the edge to defeat him.  In other words, ju isn't just about seizing the opportunity, it's about recognizing and then creating the opportunity.

So, if there is one word that best describes judo, it would not be "gentle" as most people understand and use the word. Rather, based on how this marvelous concept actually works, the best word to describe judo is "efficient." From its earliest history, Seiryoku-Zen'yo has quietly formed and guided this activity we call judo.

The above is an original article by Steve Scott, author of The Judo Advantage: Controlling Movement with Modern Kinesiology.