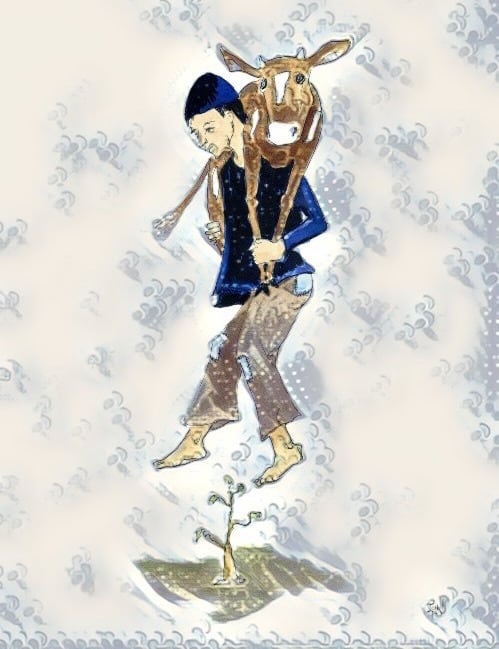 A Fight of No Fight (無爭之爭) as told by Dr. Yang, Jwing-Ming

The best way to win a fight is without fighting. Often you can win a fight with wisdom, and this is better than physically beating someone up. Instead of aggression, use patience and endurance to succeed. Big successes always come from many little efforts.

Editor's Note: This is one of the fables found in The Dao in Action: Inspired Tales for Life where Dr. Yang, Jwing-Ming, shares stories that have influenced him most as a martial artist and lifelong student of the Dao.

The best way to win a fight is without fighting. Often you can win a fight with wisdom, and this is better than physically beating someone up. Instead of aggression, use patience and endurance to succeed. Big successes always come from many little efforts.

Long ago there lived a farmer who owned a small farm. He had two sons. The elder son was named De-Xin (德信) and the younger son was named De-Yi (德義). He worked very hard to make the farm successful so he would be able to leave it to his two sons when he died. The farmer's wife had died when the boys were little, and the farmer was often busy. Without a wife to mother his boys, the farmer did not notice that his eldest son De-Xin often bullied his younger brother. The younger son, De-Yi, never complained to his hardworking father, and so life went on. The boys got older, and De-Xin took a wife. The farmer thought all was well.

One day, the father became very sick. He knew he would soon die. He gathered his sons together and said to them, "I wish to give this farm to both of you. Share it equally and help each other to make it successful. I hope it makes you as happy as it has made me." With these words the father quietly passed away.

The sons divided the land equally and set about building their own farms. Even though they had divided the land, they still cooperated, helping each other with the more difficult chores.

However, not long after the father died, De-Xin and his wife decided they had not received enough land. After all, De-Yi was single and didn't need as much land as they did. She began urging her husband to request more land from his brother.

De-Xin went to see De-Yi and demanded more land. Because De- Xin was much bigger and stronger, the only thing De-Yi could do was concede in angry silence.

However, De-Xin was still not satisfied. When he saw how easy it was to get more land from his brother, he demanded even more land. Again, De-Yi could only consent to his brother's demands. Still De- Xin and his wife were not satisfied. Finally, they demanded that De-Yi leave and give them all the land.

De-Yi requested help from his relatives and friends and begged them to mediate the conflict. None would help. They knew it was unfair for De-Yi to be forced off his land, but they were afraid because they knew De-Xin's violent temper.

Alone, De-Yi decided to take a stand for what he knew was right. He decided to stay, even though his brother wanted him to leave. For this defiance, De-Xin beat him very badly. De-Yi was forced to leave his home and become a traveling beggar.

One day, while traveling in the Jiu Lian Mountain (九連山) region of Fujian Province (福建省), he saw several Shaolin priests in town on an expedition to purchase food. He knew the Shaolin monks were good in gongfu, and he thought that if he could learn gongfu, he could beat De-Xin and regain the land that was rightfully his.

He decided to follow the monks to their temple and request that they take him as a student of gongfu. When they arrived, De-Yi asked to see the abbot.

De-Yi told the abbot his sad story and asked to be taught gongfu so he could regain his land.

The abbot looked at him and said nothing. De-Yi found the abbot's quiet stillness unsettling and calming at the same time. The abbot said nothing for what could have been either an eternity or a few minutes. De-Yi could not say. At last the abbot spoke.

"De-Yi. If you are willing to endure the hard training, then you are accepted as a student here." With deep appreciation, De-Yi bowed to the abbot.

Early the next morning, De-Yi was summoned to the backyard. The abbot was standing in front of a young willow tree, holding a calf. He said to De-Yi, "Before you learn any gongfu, you must first build up your strength. Every morning and every evening, you must hold this calf and jump over this willow tree fifty times."

De-Yi replied, "Yes, master. This is a simple task, and I will do it every day."

Every morning and every evening, De-Yi held the calf and jumped over the willow tree, fifty times.

Days passed, weeks passed, months passed, and years passed. The calf grew into a cow and the small willow tree grew big, and still every morning and every evening De-Yi dutifully held the cow and jumped over the tree fifty times.

One day, he requested to see the abbot. He asked, "Dear master, every morning and every evening I have held the cow and jumped over the willow tree, fifty times. I have performed this task for three years. Do you think I am strong enough to train gongfu?"

The abbot looked at him and the cow, and smiled. "De-Yi," he said, "you have completed your gongfu training. Your strength is enough to regain your lost land. Take this cow home with you and use it to cultivate your land."

De-Yi was puzzled. "I have not learned any martial arts," he said. "What do I do if my brother comes to fight me again for my land?"

The abbot laughed, "Do not worry, De-Yi. If your brother comes to fight you again, simply pick up the cow and run toward him. There will be no fight."

De-Yi bowed to the abbot, took the cow, and left the Shaolin Temple. Perhaps the abbot was joking with him, but the years of training had not only strengthened his body but also his spirit and patience. He accepted the abbot's wishes and returned home to cultivate his land.

One day soon after his return, De-Yi was on his way to the rice field with the cow when he saw his brother De-Xin running toward him, shouting in anger. De-Xin had heard about his younger brother's return and had decided to beat him and teach him an unforgettable lesson. He thought after this beating De-Yi would never again dare to return. De-Yi saw the malice in De-Xin's face and had a moment of panic, but he remembered the abbot's words. He picked up the cow and ran toward his brother.

De-Xin stopped. He just could not believe the strength his brother possessed. He turned around and ran away. He never bothered his brother again.