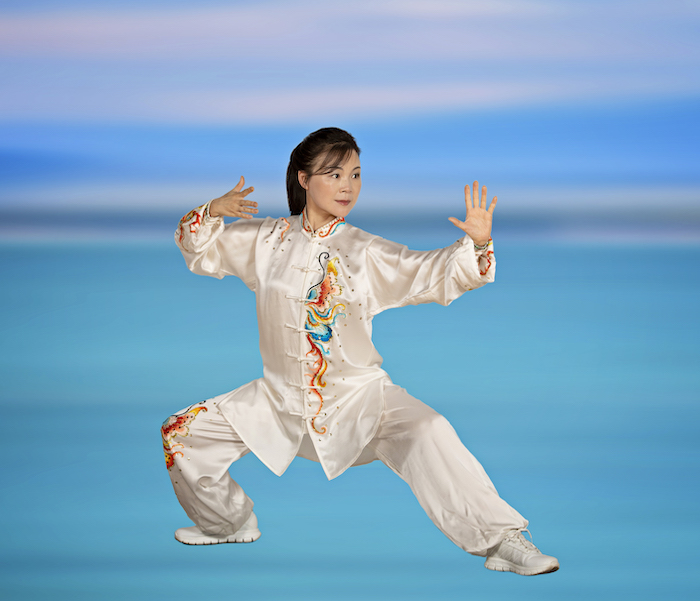 Chinese martial arts are the essence of Chinese civilization. Several thousands of years in the making, it has developed into two major styles-namely internal and external. Both styles are again divided to include countless different styles. Among the internal styles, the best known and most popular are Taiji, Xingyi, and Bagua.

However, there is yet another profound school of internal art known as Liu He Ba Fa, sometimes called 'Water style' or ‘Water boxing’ passed generation to generation for more than a thousand years to a select handful of gifted students with exemplary courage and moral character. As a result of this closed-door system, Liu He Ba Fa has emerged into the world veiled in mystery.

Liu He Ba Fa (LHBF) incorporates the qualities and strengths of the three internal styles of Taiji, Xingyi and Bagua, yet it is in a class by itself, a unique form of internal martial arts. Its movements are sometimes high, sometimes low, sometimes fast, and sometimes slow. These movements resemble floating clouds and flowing water that is sometimes calm, sometimes surging. Therefore, it is also known as Water style.

The complete name for Liu He Ba Fa is Hua Yue Xin Yi Liu He Ba Fa (華嶽心意六合八法). “Hua yue” suggests that this form belongs to the school of Hua Mountains. Xin literally refers to the heart and the mind. Liu He Ba Fa is translated as Six Unities Eight Principles. Liu He Ba Fa is believed to have been created during the time of the Five Dynasties (907-960) and the Song dynasty (960-1279) by a Daoist hermit named Chen Bo who lived on Hua Mountain located in the north central province of Shanxi. Chen Bo was granted the title "Master Xi Yi" by the first emperor of the Song Dynasty. Aside from its martial applications, Liu He Ba Fa was created by Master Xi Yi to primarily benefit health, strengthen the body, dispel sickness and increase longevity.

According to our years of in-depth research, there is only one style of LHBF; however, people perform it with many different flavors. As a result, the form can look very different to a point that it doesn’t even look like the same form. If we use Yang Taiji as an example, people from different lineages or geographic regions can perform in many different ways with different flavors. LHBF is similar in this way, except that the differences in movements and flavor can be much more exaggerated. This is because unlike Taiji, Xingyi and Bagua, LHBF wasn’t as popular and the resources have been very limited. As time goes by it has resulted in the various versions we see today.

“Representing Sichuan province, my father Grandmaster Liang, Shou-Yu was the first professional Wushu coach who performed Liu He Ba Fa in the China National Wushu Performance and Exchange Exhibition held in Xi An and Tian Jin in 1979. It was the first time for many people in the professional field, including some of the famous elder masters at the time, to see an actual performance of Liu He Ba Fa. In the early 80’s, GM Liang was also the first person who taught Liu He Ba Fa in universities in the US and Canada as well as openly to the public. There was no one before him who had ever taught this form in such an open manner. Since then, water-style has become a widely popular internal art.

Liu He Ba Fa is an internal form that embodies profound Daoist philosophies and gracefully shows its practitioners the working of the Dao—the ultimate essence of reality. Literally, Liu He means Six Unities. These Six Unities vividly present the central theme of Daoism—the yin yang theories. The Chinese believed that everything in the universe is interrelated. Everything has an opposing yet inseparable counterpart. The counterparts are referred to as Yin and Yang—night/day, earth heaven, feminine/masculine, cold hot, weak/strong, etc. Yin and Yang can never exist in total isolation from one another; each is a different side of the same coin. Yin and Yang constantly interact and change. How Yin or Yang is defined depends on the perspective of the viewer. The relation and interaction of Yin and Yang form the basis of thought and expression in Daoism and throughout the whole of Chinese culture. Maintaining a balance of Yin and Yang will result in perfect health of body, mind and spirit. In Liu He Ba Fa, the Six Unities gracefully depict how Yin and Yang harmonize each other. The Six Unities are:

1."Ti (Body Unites with Xin Heart-Mind)"
Xin refers literally to heart in Chinese; however, it is taken to mean "mind." According to traditional Chinese medicine, our heart is not just a pump; it is intuitive and all-knowing /holistic. A very popular Buddhist saying is "Ten thousand things all manifest from the heart." In everyday life, Chinese often say, "It depends on how your heart thinks or feels" or "What is this person's heart like," demonstrating the importance of our heart-mind. It is through the heart-mind that we perceive and interpret everything around us. Here in this first unity, heart-mind is yang and body is yin. Heart-mind is in motion; it is easily active and emotional. The heart-mind controls the actions and functions of the body. When in harmony, the relationship between heart, mind and body is natural and intuitive.

2."Xin (Heart-Mind) Unites with yi (Logical Mind)"
According to Chinese concepts, we have two minds. The heart-mind is also the emotional mind (xin and the other is logical mind. Xin is emotional and hard to keep steady, whereas yi is logical and can keep you calm. Xin is yang and yi is yin and the two minds interact to keep one in balance.

3."Yi (Logical Mind) Unites with Qi (Energy)"
Yi symbolizes yin. Qi is flowing and by being in motion it symbolizes yang. Our mind leads the flow of Qi in our body; where our mind goes, our Qi follows.

5."Shen (spirit) Unites with Dong (Action)"
Shen is yin. Donq refers to movement and is classified as yang. A heightened spirit calls for better body movements.

6."Don (Action) Unites with Kong (Emptiness)”
Kong is referring to a state of stillness. Here, Kong acts as yin and dong acts as yang. The movements of the body heighten our concentration and unify our outer and inner Qi. An inner stillness is maintained while engaging in myriad movements - a "doing not doing" state of body-awareness where the movements happen by themselves effortlessly. Therefore, within stillness there is action and within action there is stillness. This coexistence of opposites - stillness and movement, or yin and yang - enables the practitioner to unleash his/her creativity in all directions.

The above article appeared in “©2000 Kung Fu Magazine.com. Republished by permission.”