Brief History of Liuhebafa: Water Boxing | YMAA
Skip to main content
FREE Shipping Order Over $70. (US Only, Conditions apply)    |   Up to 40% Off. Exclusions apply. 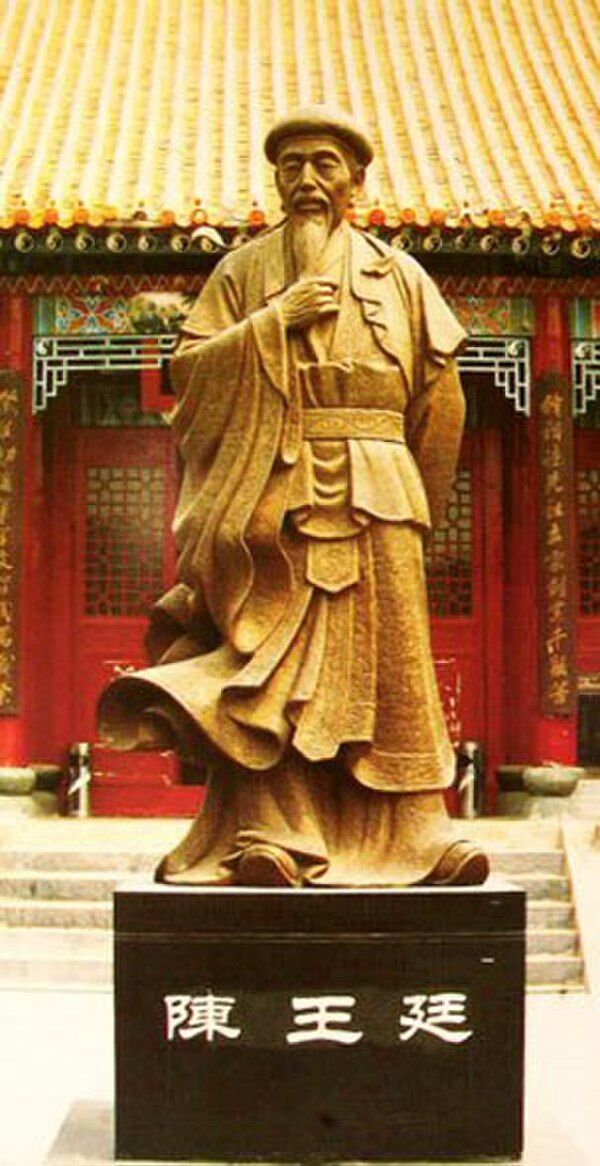 The origins of Liuhebafa, also called Water Boxing, can be traced to the Daoist sage Chen Tuan (A.D. c.871-989) also called Tunan and Fuyaozi. Chen is a mystical figure whose advice and perspective was sought by Chinese emperors during the period of the Five Dynasties and Ten Kingdoms (A.D. 907-960) and at the beginning of the Song Dynasty (A.D. 960-1279).

In addition to Liuhebafa, he is credited with the creation of Taiji Ruler exercises, qigong and neigong systems that are still practiced today, and a form of Dream/Sleeping Daoist Yoga. Let’s take a look at the life of this fascinating figure.

In (A.D. c. 871 an unusual boy, often called a child prodigy, was born into a wealthy and high ranked family surnamed Chen. This child was called Tuan. His parent’s estate located in Sichuan province was quite large and dotted by ponds and crossed by streams. Young Tuan was very much attracted to the water and could often be found walking or playing by the ponds or streams.

At the age of five, Tuan was playing by a pond one day when he noticed a beautiful bluish-green light moving toward him. Out of the light stepped the Immortal that Tuan called his Green Dressed Lady. The Lady took Tuan by the hand and said, “Look for me tonight in your dreams”. She faded back into the light and then dissolved into the distance.

True to her words she came to him in his dreams that night and for many years to come. Through these visits the Lady took him to vast temples and places of learning where he began to study from the fountain of all knowledge. Of course he also had normal physical tutors who schooled Tuan in the Chinese classics such as the Yi Jing and Dao De Jing. This schooling provided an interesting counterpoint to the in-depth training he was getting by studying these works at a higher level. At these inner temples he could see and study the wisdom in its original form that had manifested as the Yi Jing and Dao De Jing. By seeing these works in their original form, he realized that his tutors merely repeated years of conjecture and commentary that had replaced any real understanding of these esoteric classics.

Following the expectations and wishes of his family, Tuan took the civil service examinations that would have placed him highly in the service of the emperor. He was already known as an authority on the classics; famous teachers in their own right came to confer with him. However, for whatever reason, he managed to fail the civil service exams. Not long after this apparent set back, both of his parents died. After an appropriate period of mourning, Tuan began to travel throughout Asia. This gave him the opportunity to study and confer with the great masters of the time.

Many years were spent at the feet of these teachers until he came to find hermitage in the Wudang mountains of central China. His retreat was called the Rock of Nine Rooms where the Five Dragon Immortals helped Tuan assimilate all that he had studied over the years. The time then came for the Immortals to test Chen Tuan. Each of the five in his turn, posed a question and as Tuan answered the last question successfully, he was immediately whisked away to his new retreat on Hua Shan, a sacred mountain in north-central China.

In a time when there was no mass communication it is surprising how quickly seekers after truth began to find Master Chen on Mount Hua. Amidst the cloud-shrouded peaks, Tuan endeavored to teach Chinese cosmology in its original simplicity. From his own direct experience, Master Chen taught that energy manifests as matter and that matter will return to energy. To illustrate this, he outlined the process of birth, life, and death in the Six Combinations: Body combines with Mind, Mind combines with Intent, Intent combines with Energy, Energy combines with Spirit, Spirit combines with Movement, and Movement combines with Emptiness. The greater legacy of the Six Combinations is that it is a step-by-step method to move from the physical into a higher state of consciousness so that you can study from the same source as the old master himself.

During his hermitage on Mount Hua, the emperors of the time would often seek his guidance. But Chen Tuan would have none of it. He sought to live simply and explore the worlds of consciousness rather than the world of society. Nevertheless, the first Song emperor, Zhao Kuanying (r. 960-976, reigned as Taizu), appointed Tuan as an advisor to the court.

On the emperor’s way to consolidate the northern regions of China, he stopped at Mount Hua to solicit Chen Tuan’s advice with strategy in this campaign. Rather than compromise his ethics and serve in a campaign of conquest, Tuan offered a wager on a game of chess. If he lost, he would go with the emperor; if he won, the emperor would deed Mount Hua to him.

Tuan knew that the emperor was agitated by battle plans and distracted by affairs of state. This lack of concentration on the wager at hand cost the emperor the game and the mountain. Afterwards, Tuan revealed to the emperor that if his attention had not been in the past or the future, he might have won the game. He told the emperor that he was asleep and that he must awaken to the present. By focusing on the problem at hand, he would clearly see which step to take and that he must take one step at time. Following this advice, Zhao Kuanyin unified the northern kingdoms and ruled China in what would later be regarded as a cultural renaissance in China.

To this day, there is a monument to the contest between Chen Tuan and the emperor. It is located on top of the central peak of Mount Hua and called the Chess Game Pavilion. The second Song emperor, Zhao Guangyi (r. 976-997, reigned as Taizong), held Chen Tuan in such respect that he named him Xi Yi Xian Sheng meaning the unfathomable gentleman.

While on Mount Hua, Chen Tuan perfected methods to dream consciously. He would often go into a sleep state for up to one hundred days. From these forays into the dream world he discovered much and manifested it as practical methods for self-cultivation. From this repository of knowledge, he created Liuhebafa and qigong methods that are still used today. For his many creations, derived from the dream state, he is still revered as the Sleeping Immortal.

One day, Chen Tuan called his closest disciple, Jia Desheng, and asked him to excavate a new cave in a nearby hillside. After some time, the cave was finished and Tuan moved in with all his belongings and manuscripts. It was in this cave that the master died. Some seven months after his death, his body was still warm and life-like and a multi-colored cloud stayed at the entrance. It was said that at night one could see a light shining from within the cave.

About three hundred years after Chen Tuan’s death at the beginning of the Yuan Dynasty (A.D. 1279-1368), Li Dongfeng went off on a pilgrimage to Mount Hua (Hua Shan ). He was directed to some of the old caves and huts that Chen had used but there seemed to be a veil drawn over the exact location of Chen’s last cave. Disheartened, Li resolved to give up the search and return home. That night, as he sat by his campfire, he noticed a light emanating from the side of one of the mountains. He anxiously made his way toward the light. His excitement was intense as he sensed the fulfillment of his quest. The light led him to the final resting place of the old mystic.

In that cave were all of Chen Tuan’s belongings and manuscripts. Among those manuscripts were detailed instructions on Liuhebafa. Li who was a martial artist and a scholar proved himself to be a worthy student. Over the next months and years, with the help of the Daoist hermits there, Li mastered the intricacies of this internal art. Li then returned to Mount Yun (Yun Shan) to teach a small group of Daoists all that he had learned on Mount Hua.

Over the centuries, after Li returned to Mount Yun, Liuhebafa was taught only to a choice few. These fortunate students were usually chosen because they were adept in a martial art. These students brought their experience in styles such as Shaolin, Mantis, Xingyi, Bagua, and Taiji. The benefits of these arts were incorporated into Liuhebafa and made it a better and more complete art. In the main form, Liuhebafa already has the movements of Bagua; so a student with Bagua experience would simply enhance or emphasize that when performing the movements. Not unlike an accent, the inner person is not changed by the accent gained by moving to another locale.

During the Qing Dynasty (A.D. 1644-1911) people were aware of Taiji, Xingyi, and Bagua but Liuhebafa was almost regarded as myth. It took the Nationalist Revolution to bring some of the best martial arts masters to cities like Shanghai where Grandmaster Wu Yihui (A.D. 1887-1961) began to teach in the late 1920’s. As Wu’s fame as a peerless martial artist grew, so did the reputation of Liuhebafa as a preeminent martial art begin to grow.

In 1936 Wu took the position of Dean of Studies at the Nanjing Wushu College. After WWII, Wu returned to Shanghai and taught many students Liuhebafa.

The above is an excerpt from Liuhebafa: Five Character Secrets by Paul Dillon, Translation from Chinese by Zhuo Bing Yuan, Pinyin Romanization by Dr. Yang, Jwing-Ming. Published 2003 by YMAA Publication Center.

Paul Dillon was born in Montgomery, West Virginia. He attended West Virginia Institute of Technology, majoring in Printing Management. His Chinese studies were at The College of Far Eastern Languages / Yale University. Paul served in the United States Air Force during the Vietnam era. His martial arts training began in 1962, primarily in the Japanese styles. Some of the arts he studied included Judo, Shorin Ryu, Kamishin Ryu Kempo, Shin Mugei Iaido, and Aikido. In the later part of the 1960's he … More »