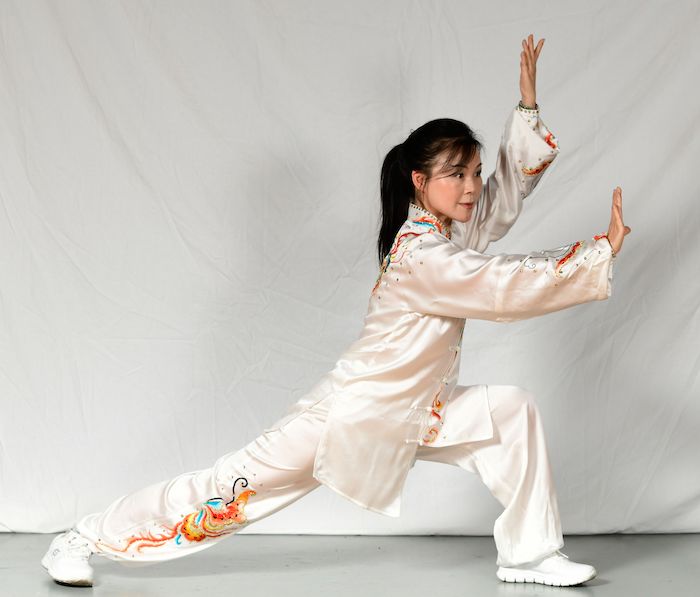 Water style incorporates the qualities and strengths of the three internal styles of Taiji, Xingyi and Bagua, yet it is in a class by itself, a unique form of internal martial arts. Its movements are sometimes high, sometimes low, sometimes fast, and sometimes slow. These movements resemble floating clouds and flowing water that is sometimes calm, sometimes surging.

1.Qi (Energy): "Circulating Qi to Gather the Spirit"
The smooth flow of Qi along the many channels (meridians) and vessels allows the smooth circulation of blood; the Chinese believe that the smooth flow of Qi and blood in the body is the key to optimal health. The spirit gathered by the circulation of Qi dissolves into the form and becomes one with the form. Thus, the practitioner is the form a nd the form is the practitioner. It is like Qigong cultivation where the small universe of our body unifies with the big universe of the cosmos. From the perspective of applications, only when spirit is gathered and Qi is abundant is one able to attain a state of perfect coordination of action and stillness. In other words, once a faint intention of movement is suggested, the entire body moves all at once; once a faint intention of stillness is suggested, the entire body calms down. When one's opponent is not moving, one does not move; when one's opponent is about to move, one precedes the opponent. This perfect coordination of stillness and action allows the practitioner to have ultimate control over the opponent.

2.Gu (Bone): "Condensing the Power to the Bones"
Some slender and un-muscular people can be surprisingly powerful. This kind of power is referred to as internal power or gu jin (bone power). Form training together with conditioning training can strengthen bone power which in turn strengthens internal power. Internal power, however, must be conserved rather than outwardly displayed, which (seen as stiffness of movements) could lead to Qi and blood stagnation. For combat, condensing one's power to the bones will hide it from the opponent, leaving the opponent unsure how to react next. When attacking, the mind leads the power which is hastened by the Qi. This power is abundant and unpredictable, thereby making the opponent unable to withstand the attack.

3.Xing (Shape): "Transcend the Forms through Mimicking the Shapes and Movements"
Many movements in Liu He Ba Fa mimic the shapes and movements of animals, plants or other natural phenomena as suggested by the names of the movements: Wild Geese Flying in Pairs, Nimble Monkey Picks the Fruit, Crouching Tiger Listens to the Wind, High Mountain Flowing Water, Swallow Flies Through the Clouds, Gentle Breeze Sweeps the Leaves, etc. However, while practicing these movements, one does not completely mimic the physical shapes and movements; rather, one dissolves into the phenomena, striving to attain unity its shape and spirit. When in combat, it is vital to be flexible, to attain a state of formlessness and shapelessness, thus leaving the opponent without a trace to follow or opportunity for attack.

4.Sui (Follow): "Coherence Coupled with Fluidity"
One is expected to practice the entire form of Liu He Ba Fa with continuity, never breaking the flow of Qi, power, or movements. Each movement follows what the mind directs. One movement immediately follows the previous movement. The end of one movement and the beginning of the next echo each other, constantly moving in four directions in a smooth fashion. Combat requires a high level of body coordination. Whether attacking or defending, one's movements or techniques should be highly coherent and fluid.

5.Ti (Elevating, Lifting): "Head Suspended in Emptiness"
Ti refers to the way the body is relaxed while practicing the form. This kind of relaxation is not flaccid; one's spirit should be lifted and body postures correct. The head should feel suspended. Imagine that the bai hui cavity atop your head is suspended by a thread. Through this visualization, the mind becomes empty in nature. When the head is slightly lifted, it will be upright with the neck relaxed. One's appearance will have a sense of vitality, and this heightened spirit will intimidate the opponent.

6.Huan (Return): "Coming and Going in a Continuous Flow"
This mirrors the cyclic nature of the Dao's endless motion and change. Chapter 25 of the Dao De Jing says that the "Dao” "travels far" and "returns." The idea is that everything around us is undergoing a constant flow of transformation and change. All things show cyclic patterns of coming and going, of expansion and contraction, and this is the ultimate constant of nature. One who embraces this nature of cyclical change and acts with spontaneity will thrive. The entire form of Liu He Ba Fa is practiced in a continuous and flowing fashion. Movements are carried out in a spontaneous manner. When practicing the form, one moves in all directions with stances that are sometimes high, sometimes low, and speed that is at times fast, other times slow. It is like the surging water with movements that are strong and powerful and the gentle stream with movements that are lithe and supple - all directed by the mind and manifested spontaneously. In combat, one must to move with agility - attacking and retreating with effortless ease, employing strategies like "feinting to the east and attacking the west" and moving in myriad ways, sometimes forward, sometimes backward, sometimes to the left and sometimes to the right, ever misleading the opponent.

7.Le (Rein In): "Keep the Still and Guard the Empty"
Le refers to one's ability to take the reins of control. As the movements of the form are ever-changing, coming and going continuously, cultivation of the mind is crucial to fully master these movements and act with spontaneity. The mind needs to be still and calm. This mirrors the emptiness and stillness of the Dao. Chapter i6 of the "Dao De Jin,~' asks one to "empty oneself" of everything, to bring stillness to the mind and peace to the heart. Stillness and emptiness is the way of nature. Emptiness is the source of being and stillness is the root of motion. Therefore, all being must begin with emptiness and all movement must be born in stillness, and all must return to emptiness and stillness in the end. This is the cyclic pattern of nature. One who embraces it and acts with spontaneity will thrive. By "emptying oneself of everything" and having a still and calm mind, one can take the reins in the midst of the ever-changing movements. In combat, a still and calm mind responds well to all situations.

8.Fu (Conceal): "Illusive in Concealing Strategies"
Fu means to hide, to conceal. Like the Dao that is hidden deep but ever present, Liu He Ba Fa has the aesthetic quality of floating clouds and flowing water. Many martial techniques are well concealed beneath its surface, hidden within the movements and postures. Like water, the movements are sometimes calm, sometimes surging, sometimes high, sometimes low, ever changing and unpredictable. The applications are wrapped in a veil of ever-changing and unpredictable movements, making them hard to detect and thus befuddling the opponent.

The entire form of Water style (Liu He Ba Fa) is governed by the mind. It emphasizes the harmonious interaction between the yin and yang. It requires the cultivation of both form and spirit, a balance o f soft and hard, fast and slow, and a continuous flow of rise and fall. As such, it brings its audience the beauty of softness and gentleness coupled with strength and vigor, vivacity coupled with sacredness, and expansiveness coupled with compactness. From the perspective of applied martial arts, its movements hold useful applications and allow a variety of two-person set training. For health and longevity it provides a form of Qigong – namely Daoist moving Qigong. The versatility of Liu He Ba Fa is beyond imagination.

My journey practicing Liu He Ba Fa over the past three decades has been extremely humbling and enlightening. It has guided me through good and bad and generously showed me the Way, or Dao - the Dao that is silent, yet engages in ceaseless motion and activity; that is hidden deep, yet ever present; that exists nowhere, yet everywhere. This Dao is up to you to fathom.

The above article appeared in “©2000 Kung Fu Magazine.com. Republished by permission.”

(Editor’s Note: This is Part 2 of a two-part article by Helen Liang.)