Krav Maga: Developing Power and Balance for Maximum Effect | YMAA
Skip to main content
FREE Shipping Order Over $70. (US Only, Conditions apply)    |   Up to 20% Off. Exclusions apply. 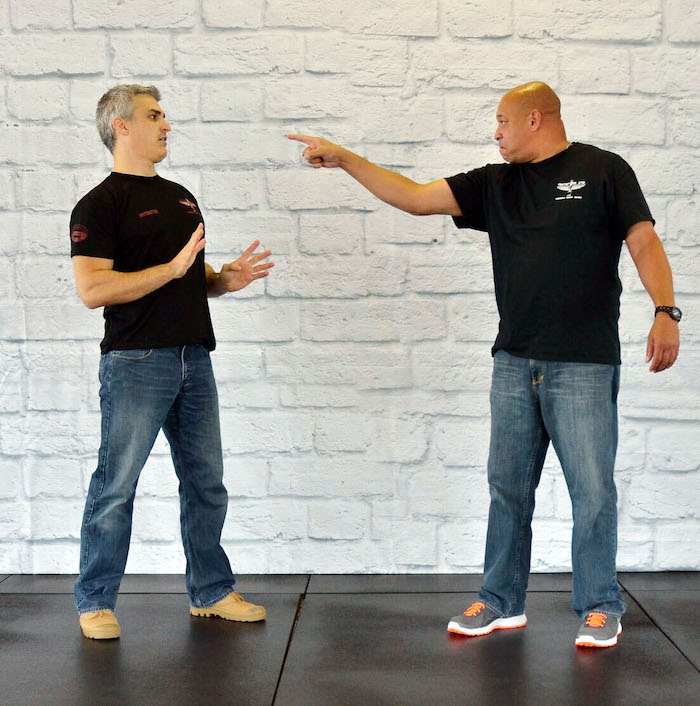 The following emphasizes the how of effective krav maga, in terms of how you use your body for the best outcomes. Israeli krav maga is designed to work for anyone regardless of athleticism, skill, size or gender. There are a few elementary techniques that you can perform instinctively and apply to a wide variety of situations. Importantly, you need not master more than a few combatives to become a kravist or competent krav maga fighter capable of defeating any type of unarmed or armed attack or threat.

While there are no set solutions for ending a violent confrontation, there are preferred methods using retzev. Retzev is a Hebrew word that means “continuous” as in “continuous combat motion.” Krav maga uses retzev to prevail by overwhelming an assailant to complete the defense. It cannot be emphasized enough that, to adopt and streamline the krav maga method, you personalize the techniques to make them your own. For example, you may like a straight lead kick followed by a straight (same-side) lead punch. Or you may prefer a rear straight kick followed by a rear straight punch. You may prefer two alternating horizontal elbow #1 strikes or, instead, a front horizontal elbow #1 followed by a rear over-the-top elbow #8 combination. (These elbow strikes are all spelled out in the book, Krav Maga Combatives by David Kahn.) Choose the ballistic strikes and other combatives you feel most comfortable with and that will give you the greatest confidence.

Self-defense involves different phases that are best categorized by the distance or proximity opponents maintain as the attack evolves. From a long or medium range, opponents have unhindered movement to batter one another, usually involving long kicks, medium punches and other hand strikes. From a short range, knees, elbows, head butts, and biting become options. This includes a variety of standing entanglements involving medium and short strikes, trapping, clinching, throws, takedowns, and standing joint locks, all combined for “close retzev.” A final phase may occur, when both opponents lock up to unbalance one another to the ground, involving medium and short combatives combined with locks and chokes.

Movement on the ground is different from standing movement. The nature of ground survival can allow one opponent superior control and positioning; the other opponent cannot run or evade as he might while standing. Krav maga ground survival is best defined as “what we do up, we do down,” with additional specific ground fighting capabilities. We employ many of our standing combatives on the ground, including groin, eye, and throat strikes in combination with joint breaks and dislocations designed to maim our opponent. So remember, what you learn to do standing is simply and effectively modified for ground survival applications.

The best way to practice these combatives—as with all techniques—is in stages. Each stage must be isolated, practiced, and perfected. As you master each stage, you can then combine them for the whole combative. A full-length mirror can help you monitor your form.

Many parts of your body, including your hands, forearms, elbows, knees, shins, and head can be used as personal weapons. There is a distinct advantage in using the hard parts of your body such as your elbows, knees, and feet as weapons against your attacker’s vulnerable body parts. Optimized striking involves keeping the body’s muscles relaxed until just before your limb impacts the opponent. By making the body rigid, using a strong, balanced base a fraction of second before impact, you generate maximum speed to then instantly incorporate your body mass behind the strike.

Attacking an opponent’s soft vital tissue, especially the eyes, throat, and groin, is one of the surest ways to end the fight, and krav maga emphasizes these targets. You know your body’s sensitive spots. If you inadvertently poke yourself in the eye without closing the lid, you will immediately feel your eyeball tense and begin to water. If you have inadvertently hit yourself in the groin or landed on a bicycle bar the wrong way, you know the result. Lightly tap yourself in the throat and you will feel the sensitivity immediately.

Remember, striking someone in the throat can have serious and, perhaps, fatal consequences. Of course, this is why we are so adamant in protecting our own throats, along with our other vital body parts. This type of specific strikes must only be used if you are in fear for your life and limb. These strikes are commonly employed from an intermediate (punching) range. As with other upper-body strikes, hip and weight movement are essential to delivering reach and power to take advantage of your body’s core strength and mass behind the combatives. The striking hand or forearm must also be properly positioned and aligned.

Use All Body Parts

Proper krav maga techniques do not rely on strength. The power behind combatives derives from correct execution, not from body size or muscular strength. Many people think of hand-to-hand combat as exactly that: using your fists to strike at an opponent. Yet, krav maga teaches you to use every part of your body—from the head to the foot—as tools to deliver strikes. Regardless of your body size or muscular strength, you can deliver powerful strikes with your hands and elbows. Precise execution of a punch or elbow strike will generate much more impact than muscling your way through.

For a great overview and incisive explanation of the physics underlying krav maga and martial arts applications, I highly recommend Fight Like A Physicist (YMAA 2015) by Jason Thalken, PhD. Physics dictates that acceleration times mass equals force. For example, your strike will generate more force if you accelerate as you extend your arm to put all of your body weight (mass) behind an upper-body strike. The same is true, of course, for executing a lower-body combative. Alternatively stated, any combative strike will have more force if you accelerate your speed in combination with a total body-weight shift, as you extend your personal weapons through your target.

The difference between a high-momentum versus high-energy strikes is that high-momentum strikes drive an opponent backwards. Momentum is your weight combined with how fast your limb strikes. Kinetic energy is the measure of tissue damage you inflict on an impact area. Israeli krav maga emphasizes transferring both momentum and kinetic energy through a strong small robust striking point. For example, in the straight punch, use your hand’s first two knuckles (pointer and middle finger) in counterattacking against a hook punch, in the horizontal elbow strike, use the top of the ulna bone (just below your elbow tip), or use the heel of your foot when delivering a low sidekick. To increase the damage of a strike, create maximum velocity as well as follow-through. Follow through involves farther extension of the striking limb, enabled by pivoting correctly.

What would you rather deliver: one superior debilitating kick or multiple inferior, ineffective kicks that do not incapacitate an attacker immediately? Certainly this question becomes more prominent if multiple attackers are introduced. More often than not Imi Lichtenfeld, founder of krav maga, faced multiple assailants. Accordingly, every combative had to count. There might not be time or space to deliver a secondary combative because another attacker might set upon the defender immediately. This is not to say that multiple combatives might not be warranted against an attacker; it’s simply that you might not have the chance to deliver another one.

Along with efficacy, with the proliferation of cameras both stationary and through handheld devices, you may well be filmed defending yourself. What will appear more reasonable in a case of self-defense to a prosecutor or jury? One well-placed kick or three ineffective kicks? From an objectively reasonable force standard, obviously, one kick is the answer. Remember: juries often do not understand the reality of self-defense—that it often takes more than one combative to defeat a determined attacker—and jurors might expect one combative counterattack to suffice. Any more than one or two combatives and you might be considered to have employed excessive force.

Extreme force driven through vulnerable anatomy creates injury. Combative strikes harvest the largest possible load of kinetic energy to then drive it through the opponent’s targeted anatomy. This is achieved by harnessing the entire weight of the body to propel it, using a balanced movement through the target via a combative strike. The combative strike can only be optimized when you create sound structure.

Good training partners will help you refine your combatives by sometimes working against you hard, as though your combatives had no effect, and other times with controlled training that simulates how the body would react when affected by traumatic injuries. Economy of both combative motion and targeting seeks to create damage every time you make contact with the opponent.