Maximizing Metarobic Effects | YMAA
Skip to main content
FREE Shipping Order Over $70. (US Only, Conditions apply)    |   Up to 40% Off. Exclusions apply. 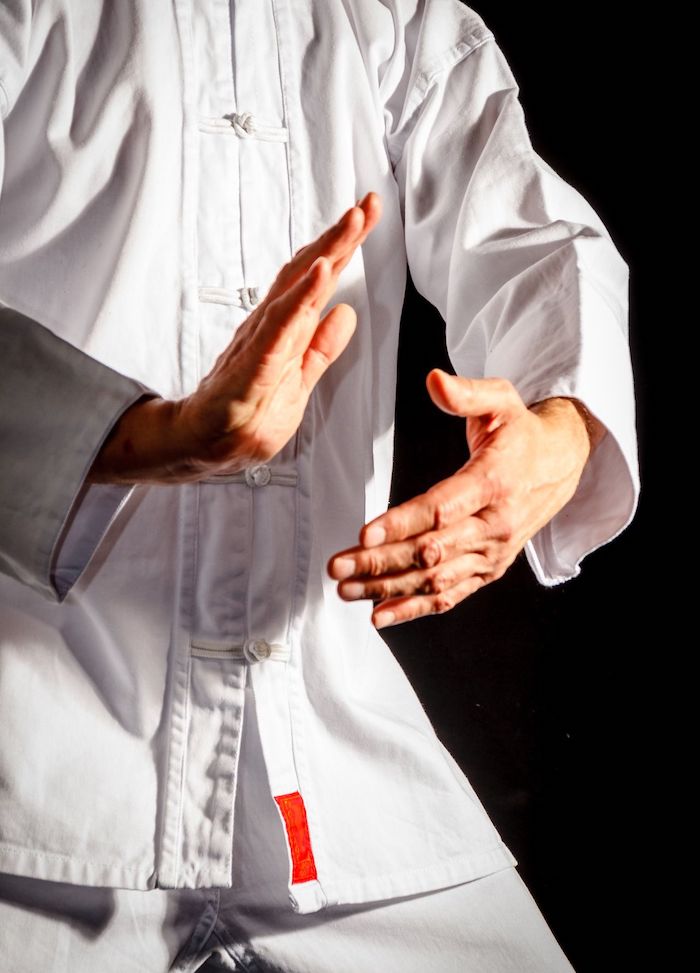 Those forms of exercise that focus on relaxation, efficient movement, and slow, deep breathing yield consistently higher blood oxygen saturation levels, as well as feelings of enhanced oxygen diffusion. This includes relaxation- and breath-focused forms of qigong and yoga. Since one of the drawbacks of traditional formats of tai chi is the long learning curve, I developed an easy-to-follow format. This format consisted of shifting the feet back and forth in place through the range of movements found in tai chi, focusing on movements that maximize Metarobic effects.

My teacher mentioned that a similar format was used by political prisoners, when space was limited, by switching steps in place. He jokingly called this jail cell–style tai chi. This format maximizes relaxation and movement to the point that blood oxygen saturation remains elevated throughout the form. With a focus on being single-weighted balance can also be enhanced. Death from falls is the leading cause of accidental death and injury in older adults. So aside from Metarobic benefits resulting from slow, relaxed movements with a focus on the breath, it should also be kept in mind that there are many auxiliary benefits, including psychological benefits related to mindfulness, addiction treatment, and stress reduction.

Drugs for Life, or Tai Chi?

“I suffered from a lot of pain as a result of various sports injuries over the years. I was suffering from shoulder and neck pain, as well as pain in my right hip. I was also suffering from bone problems and inflammation. My doctor had told me that I had osteoarthritis in my neck, and that I would have to take anti-inflammatory drugs for the rest of my life. Since doing tai chi, I do not have pain anymore, and do not need to take those drugs. After practicing tai chi for six years everything has gotten better.”

Understanding of the physiological mechanisms behind the benefits of tai chi, qigong, forms of yoga and other Metarobic exercises does not invalidate the efforts of anyone looking for the mysterious, but it does offer a scientific explanation of benefits, and can help to maximize practice for optimal effect. Practitioners of forms of tai chi, yoga, and qigong have reported benefits similar to those of many medications taken to relieve chronic pain and inflammation, but without the severe side effects. These side effects can include heart attack, stroke, skin and allergic reactions, ulcers, and death. However, you should never stop taking or alter medications without first talking with your doctor on how to best integrate tai chi or other Metarobic exercise as a complementary practice.

According to the Centers for Disease Control (CDC), seven out of ten causes of early death are preventable through lifestyle changes. Metarobics offers a simple avenue to add a new dimension to life—a dimension that can reduce stress, enhance sleep, and help your body to function more efficiently to combat a wide variety of ills. Although Metarobics is no substitute for a balanced diet and a complete exercise regimen that also benefits from cardiovascular, strength, and stretching exercises, it does add a new dimension and a way to enhance health, particularly for those who are limited in their ability to exercise.

Metarobic exercises can cover a wide spectrum of mindfulness-based practices, exercises that focus on unifying the mind and body through the breath. Although the focus of this book is on tai chi, Metarobic principles, can apply to a wide range of mindful practices, including qigong, yoga, and even sitting meditation. All of these practices share the common characteristic of a focus on relaxation, full, deep breaths, and body alignment.

Although sitting meditation may not be seen as an exercise per se, new research on meditation supports findings that Metarobic benefits for health, aging, and longevity may be tied to effects of enhanced oxygen-based metabolism and diffusion on telomerase production. Telomerase is an enzyme that can have a protective effect on telomeres. Telomeres are end caps on our chromosomes that affect health and the aging process. Longer end caps are associated with longer life spans and improved health.

Over the course of our lives, telomeres are lost every time cells divide. And cells have a limited number of times they can divide. When they lose this ability through the course of aging they can no longer replicate and become enlarged. Prematurely shortened telomeres lead to cell death and aging. Modern medicine is looking at drugs and medication that can preserve telomere length. But aside from medication, there is also evidence that Metarobic effects generated by a relaxed physiological state, and the focus on the breath in tai chi, qigong, yoga, and even in seated meditation, may also affect telomere length.

So what does this have to do with tai chi, Metarobic theory, and health? Put simply, studies have found that stress can result in the shortening of telomeres. Meditation, including moving forms of meditation such as tai chi, can help offset hypoxia, in addition to reducing stress. Stress results in a highly reactive physiological state as well as tense muscles. This further impacts oxygen levels in the body, inhibiting the body’s ability to heal itself. Since Metarobic theory supports that mindfulness-based practices enhance blood oxygen saturation and diffusion and oxygen-based metabolism, benefits may extend to optimal telomerase activation and maximized telomere length.

Dr. Elizabeth Blackburn, who has done research on telomeres and meditation, shared the 2009 Nobel Prize in Physiology or Medicine for discovering how chromosomes are protected by telomeres and the enzyme telomerase. In a Scientific American interview, she discussed the effects of telomerase on telomeres and aging. Dr. Blackburn notes that telomerase helps prevent the shortening of the telomeres, and thus acts as an anti-aging enzyme. However, she also notes that too much telomerase can help confer immortality on cancer cells and actually increases the likelihood of cancer. She further notes that too little telomerase can also increase cancer risk by affecting the healthy regenerative potential of the body.

To reduce cancer risk and enhance optimal health, the body needs an ideal level of telomerase. Complementary exercises such as tai chi, qigong, meditation, and related exercises can help achieve this naturally, theoretically maximizing optimal effects through a Metarobic response. This is important to consider, in that trying to affect telomerase levels artificially through drugs is not yet a precise science, in an area in which Dr. Blackburn states does not have a whole lot of room for error.

Dr. Blackburn also participated in a review of literature relevant to using meditative- or mindfulness-based practices to reduce the effects of stress, and the relationship to telomere length and the aging process. The review concluded that there is considerable support that mindfulness-based practices (including tai chi) may have beneficial effects on telomere length. The primary mechanisms identified included reduction of cognitive stress and stress arousal, as well as increased positive states of mind and hormonal factors that may promote telomere maintenance (such as through optimal levels of telomerase).

All of these factors would relate to Metarobic theory, optimal oxygen-based metabolism and cell functioning, and potential effects on hypoxia. Tai chi and related exercises are reputed in China to be exercises of immortality and longevity. Science is proving that the “immortals” of China may have the right idea—relax, breathe, and let your body function at its optimal level, uninhibited by stress and tension.