Essential Stick Fighting: Crossing the Gap | YMAA
Skip to main content
FREE Shipping Order Over $70. (US Only, Conditions apply)    |   Up to 40% Off. Exclusions apply. 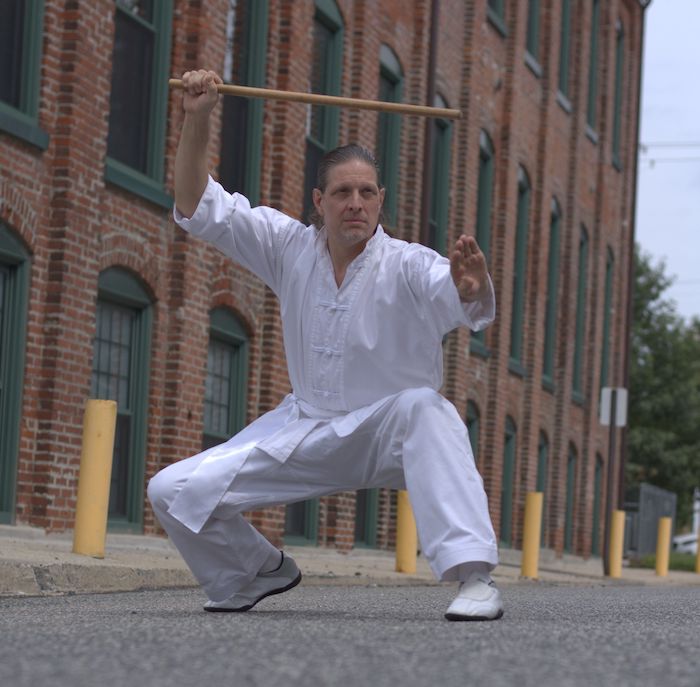 The human mind can be very predictable. Our brains have a natural tendency to look for patterns, and you can use this knowledge to trick your opponent into doing what you want him to do. This is called programming. Programming is an exceptional method of setting up your techniques, maximizing the probability of eluding your opponent’s defenses in order to land a decisive, disabling strike.

Even though you may prefer to fight from long range, there will be times when you will want, or need, to go to middle range, where you can use your free hand to check your opponent’s weapon hand. Perhaps you are not winning at the outside game, or maybe your primary strategy is to skip over long range altogether to engage the opponent at middle range. Perhaps it is a self-defense situation in which you need to disarm and neutralize the attacker quickly and do not have time for an extended long-range confrontation, in which case you could transition directly to close range. Whatever the reason, you will still have to move through the opponent’s long-range zone before you can engage your opponent at a closer range. This is called entering or crossing the gap.

When moving to middle range, you are most vulnerable to attack while crossing the gap. Your goal is to cross safely into the middle-range striking zone without getting hit in the process. There are several ways to accomplish this. Although these are not the only ways, and they are by no means foolproof, the following methods do have a high rate of success across a variety of situations.

If you are already actively engaged in the long-range game, entering offensively is only a matter of proper timing, as you must wait until your opponent is in a poor position to strike you. The opponent can inadvertently put himself in a bad position by overcommitting to a strike that ends up missing its target, leaving him temporarily unable to counter. The opening will be very brief, so you must be ready to spring inside as soon as his strike goes by.

You can increase your odds of success by controlling the action. Use the technique of baiting and drawing to entice your opponent into making a big swing. Leave an opening that your opponent cannot resist. When he takes the bait, move his intended target just out of the way. Provided that your opponent was sufficiently committed to his strike, his momentum should carry his weapon past the target. Immediately enter through the resulting gap in your opponent’s defense.

You can enter offensively, using rapid-fire strikes to cover your approach. Use the flower twirl to attack the opponent’s lead hand, getting progressively closer until you end up at middle range.

Blitzkrieg, German for “lightning war,” is a strategy by which the attacking force uses a short, fast, powerful attack to break through the opponent’s lines, displacing their defenses in order to deliver a decisive blow. That is exactly what this simple but effective combination does.

The human mind can be very predictable. Our brains have a natural tendency to look for patterns, and you can use this knowledge to trick your opponent into doing what you want him to do. This is called programming. Programming is an exceptional method of setting up your techniques, maximizing the probability of eluding your opponent’s defenses in order to land a decisive, disabling strike. This is accomplished by first getting your opponent to expect a certain attack, then quickly changing the angle of your attack halfway through the technique.

To begin, deliver a strike to any open target. If it is blocked, retreat to your ready position, only to attack the same target again, in the same manner, a moment later. Each time, observe how your opponent counters your technique and quickly determine where he is open in that instant. The third time you attack, your opponent will subconsciously expect the same attack you have thrown previously. Use that expectation to your advantage by feinting with the initial technique before striking where your opponent has left himself open.

Again, timing is important. You must remain committed to your feint until you perceive that the opponent has committed to a specific defense, then quickly and smoothly change your strike to an unexpected, and therefore undefended, angle. Do not strike on a one-two practice count, as this allows your opponent an opportunity to adjust and counter your technique. Instead, strike on the half beat—not one-two but rather one– one and a half!

Studies of historical injury patterns show that the left side of the head is targeted far more often than the right, and that the great majority of blows come from a downward direction. This is in accordance with the habitual method of attack for a right-handed person. Whether it is Roman gladiators (Head Injuries of Roman Gladiators” Forensic Sci Int. 2006 Jul 13; Vol 160(Issues 2–3), Pages 89–236.) or medieval soldiers, the majority of injuries sustained in combat are found on the left side of the skull. In his 2016 research paper on the 1461 Battle of Towton, which occurred in England during the Wars of the Roses, Michael Cahill writes, “The majority of the blunt force wounds were delivered to the front left side of the skull indicating that these individuals partook in face to face combat against right handed assailants.”

The historical data is clear: in combat, most strikes are delivered on a downward angle to the left side. You can expect to encounter similar trends in a stick fight. Therefore, when crossing the gap defensively without having already engaged the opponent, your primary concern should be blocking your upper left-hand quadrant. This is often accomplished with a high block, also called a roof block or upper block, in which the stick is held over the head on a diagonal with the tip by your left shoulder.

One of the most important elements of crossing the gap with a block is speed. The less time you spend in long range; the less opportunity your opponent will have to hit you on your way in. The quickest way to cross the gap is to use a full passing step. Full steps are how humans regularly walk and run, so they are naturally a faster means of moving forward than shuffling.

Stay unpredictable by varying your attacks so that they come from all angles and all levels. For example, as you cross the gap with a roof block to protect your head, you can use the motion as a windup for a forehand strike. This can be delivered to any level. For example, you could follow up with a downward diagonal number 1 strike from above that targets the opponent’s left neck pocket; a number 3 strike that rips horizontally from right to left across his abdomen, targeting his diaphragm; or a low strike to the inside of the opponent’s lead knee.

The above is an excerpt from The Art and Science of Stick Fighting: A Complete Instructional Guide, by Joe Varady, publication date March 2020, YMAA Publication Center, Inc., ISBN: 978-1-59439-733-2