Takedowns and Throws by David Kahn
Skip to main content
FREE Shipping Order Over $70. (US Only, Conditions apply)    |   Up to 20% Off. Exclusions apply. 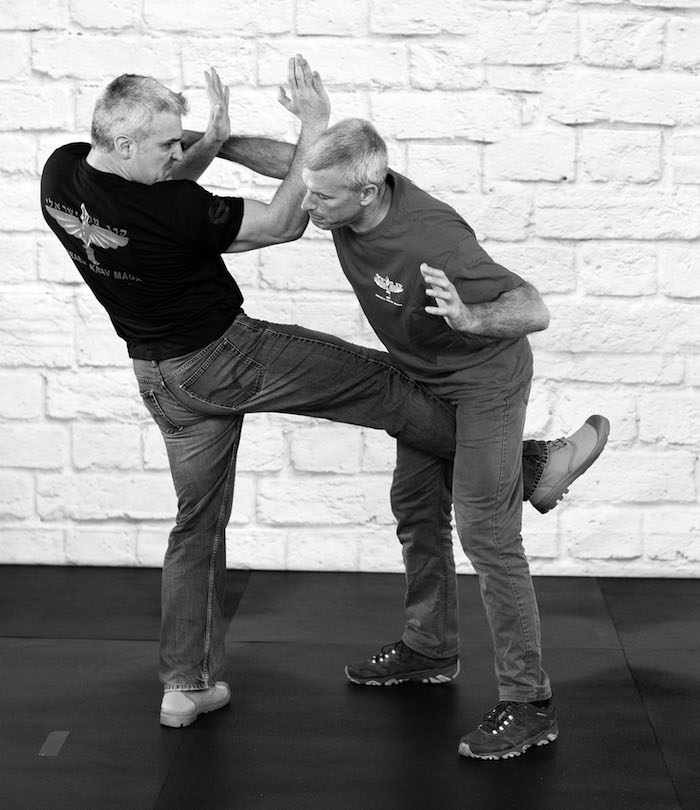 In choosing these throws and takedowns, Imi married these techniques with many of the core defenses against upper-body attacks. Imi recognized that by letting gravity take its course, coupled with momentum generated by the throw or takedown, slamming someone into the ground would help take the fight out of him—or, at the least, momentarily diminish his offensive capabilities.

Krav maga teaches simple and effective takedowns that usually flow naturally from other techniques to put an opponent on the ground. Think of these techniques as extensions of a previously completed combative technique, such as a gouge to the eyes to disorient an opponent as you perform an Outside Reverse Sweep (Osoto Gari).  Although more advanced hip-throws and other takedowns are an integral part of advanced krav maga training, they are beyond the scope of this article.  If you are interested in learning more, I refer you Krav Maga Combatives Maximum Effect.

Selecting a throw is generally determined by body positioning and the dynamics of the entry to the throw. The goal with throws and takedowns, as with all krav maga thinking, is to accomplish the greatest effect with the least effort.

Your aim in any type or throw or takedown is to ruin the opponent’s balance, while hastening his impact with the ground. In other words, undercut your adversary’s balance by collapsing his structure. Tactically, this could include crippling one of his knees, sweeping his feet from under him, or picking him up and dropping him pointedly on a specific part of his anatomy. In short, krav maga takedowns and throws principally distill into two methods: (1) removing the opponent’s base balance (legs) or (2) forcing his center of gravity (just below the navel for most people) beyond a stable base (two balanced legs).

This type of combative that forces the opponent to drop unassisted or pounds him into the ground is designed to inflict serious damage such as neck or spinal injury; skull fracture; broken wrist, elbow or coccyx; a damaged shoulder; or a concussion. So, obviously, use this type of combative only when necessary. (Keep in mind, it is highly foreseeable a jury will conclude that you intended to seriously injure him.) Obviously, in a life-and-death violent encounter, you may wish to make the throw as damaging as possible. With a throw or takedown, physics dictates that you can heighten an impact’s velocity by approximately 50 percent by undercutting both of the opponent’s legs from the ground as opposed to just one leg. While you can also maximize impact by adding your body weight to fall on top of the opponent, krav maga emphasizes remaining standing and mobile whenever possible.

For hip throws, your primary maneuverability and power comes from your legs. As you enter the throw, the goal is to displace the adversary’s base with your own base. This is accomplished by taking him off his feet, while momentarily balancing him atop your own torso to launch him. For one arm throws (Ippon Seo Nage variations), the arm serves as a lever that produces a longer arc, allowing you to launch him higher and farther, thus increasing his impact with the ground.

You can put an assailant on the ground in three ways:

2. Undermine his support. Combatives include strikes, trips, and leg sweeps, especially on the lead leg as he moves forward and shifts his weight.

3. Lock his joints to force him down. When the defender is still standing, a heel hook is especially effective. The heel hook is best applied by using your hip and core, not just your leg. As you move your hip, drag your leg with you to ensnare the leg, while knocking his torso off balance.

Keep in mind that a defender often falls to the ground with an assailant, because the assailant grabs or locks on to him while falling. Flailing and grabbing are natural instincts when falling to the ground. Do these both strategically and tactically to attack his vulnerabilities—eyes, throat, groin.

To control an adversary’s center of gravity, a push or pull move is usually used. This type of combative is best used when perpendicular to the adversary’s center of gravity when neither of his legs can easily recover to restore his balance. The goal is to remove both his support and balance simultaneously. Takedowns, sweeps, and throws displace an opponent’s foot or shift his center of mass away from a remaining support leg(s).

The formula is once again simple: krav maga is designed to overcome any disparities in size or strength. The key is simultaneous attack and defense to disrupt the attack. As soon as you disrupt the attack, you will immediately redirect it into a throw or takedown, using gravity and the ground to further neutralize the threat. A strong combative will stun the assailant, allowing you to enter and unbalance him so you can complete the takedown or throw.

An unbalanced adversary is obviously easier to displace than a balanced one. Even if your initial throw or takedown is unsuccessful and the assailant maintains partial balance, continue your retzev,applying a subsequent combative or series of combatives to keep attacking the threat. Always attempt to keep your retzev seamless, transitioning from one technique to another in a logical manner. (Retzev is a Hebrew word that is used in krav maga meaning “continuous combat motion.)

When an assailant attempts to throw you, by the very nature of movement and tactics, he is creating an opening for you to counterthrow. This is true of all combatives, including kicks, punches, knees, and elbows. A good fighter will minimize these openings, but they are still there to be exploited, if the defender is skilled enough to recognize and execute the countertechnique properly.