Defining the Threat—Perception vs. Reality | YMAA
Skip to main content
FREE Shipping Order Over $70. (US Only, Conditions apply)    |   Up to 20% Off. Exclusions apply. 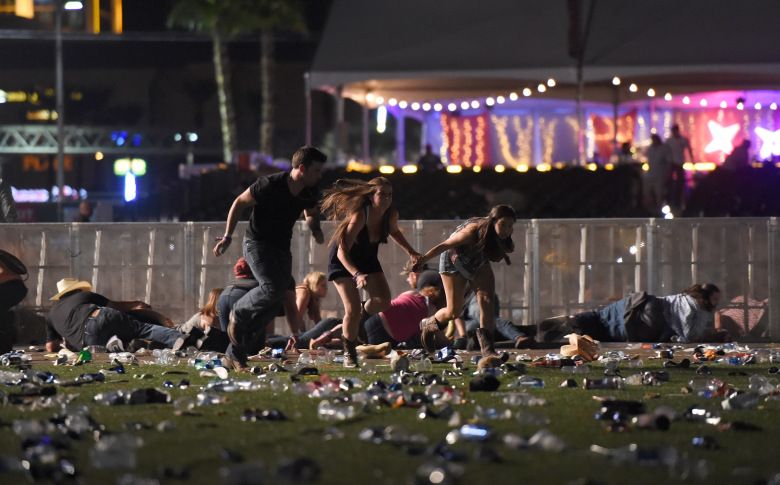 Defining the Threat—Perception vs. Reality

Let’s perform a little mental exercise. I want you to close your eyes and come up with a mental picture of what you think a terrorist looks like. Be honest with yourself; don’t think about what’s culturally or socially acceptable, just form the image in your head based on what you know about terrorism. What do you see? Where is this person from? What do they look like? Are they poor and underprivileged? Are they well off and nicely dressed? Come up with as much detail as you can. No matter what image you came up with in your head, I can guarantee the reality is much more diverse.

It has often been argued that the world around us is subjective, that each individual's own perception dictates his or her reality. This would mean reality has to change from person to person. While it may be true that we all view the world differently based on our individual experiences, reality could not care less about your perceptions, and it does not adapt to your point of view.

Reality is based on the cold hard facts that surround us, and unless you can sort fact from fiction, you may be putting yourself at a disadvantage. In the early days of the Federal Air Marshal Service, our reality revolved around the fact that hijackings rarely ended in death. It wasn't until after the events of 9/11 that we realized our view of the threat didn't match the reality, but by then it was too late. The rapid expansion of the service to meet this new threat was now completely reactionary.

Let's perform a little mental exercise. I want you to close your eyes and come up with a mental picture of what you think a terrorist looks like. Be honest with yourself; don't think about what's culturally or socially acceptable, just form the image in your head based on what you know about terrorism. What do you see? Where is this person from? What do they look like? Are they poor and underprivileged? Are they well off and nicely dressed? Come up with as much detail as you can. No matter what image you came up with in your head, I can guarantee the reality is much more diverse. Here are a few examples from just the last few years:

• October 1, 2017: A sixty-four-year-old white male opened fire on a crowd of concertgoers at an outdoor event on the Las Vegas strip in Nevada. Fifty-eight people were killed, and 851 were injured.

• October 31, 2018: A twenty-nine-year-old Middle Eastern male drove a rented truck into a crowd of joggers and bicyclists along a bike path in New York City. Eight people were killed, and twelve were injured.

• April 3, 2018: A thirty-eight-year-old female opened fire at the You- Tube headquarters in San Bruno, California. Three people were wounded.

Now take your mental image of a terrorist and compare it to what we see in the real world. How does it match up? No matter what you may have envisioned, in reality, we have a sixty-four-year-old man with no apparent motive, a young female, and one man from the Middle East. My point here is that there is no specific template for danger. It can come from anywhere at any time and be perpetrated by someone who before an actual attack was never even on your radar.
With all of these unknown variables, it would seem that just staying locked up inside your own home would be the safest option, but that isn't necessarily the case. The variables that affect your safety can be minimized by putting aside your preconceived notions and focusing specifically on actions. These "pre-incident indicators" can be applied universally regardless of race, religion, gender, or sexual orientation. They're identifiable patterns of behavior we all adhere to, and they dictate where your focus should be when you're dialing into your surroundings.

The Levels of Awareness

A critical element in your personal safety is learning about the various levels of situational awareness and how those levels affect your capacity to react. These levels of awareness are most commonly referred to as "Cooper's Colors," and they serve as the basis for the system of awareness you are about to learn. The Cooper color code system of awareness was developed by Marine Corps Lieutenant Colonel Jeff Cooper and includes five conditions, or colors, that represent a person's mental state during their daily activities. 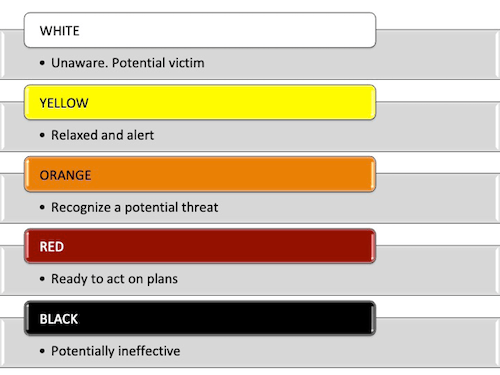 1. Condition White: In this condition, a person is entirely relaxed and unaware of what's going on around them. In the majority of cases, condition white is reserved for when you are asleep or when you find yourself in an environment you assume to be completely free of threats, like your own home. Criminals generally target people they deem to be in condition white. If you are ever attacked while in condition white, the chances of escape are diminished because your attacker caught you off guard.

2. Condition Yellow: This is a state of relaxed awareness. You appear to those around you to be entirely comfortable in your environment while paying close attention to the sights and sounds that surround you. This condition of awareness does not constitute a state of paranoia or hypervigilance. Instead, you've simply upped your awareness to a level that would prevent you from being caught off guard. Condition yellow is where you begin taking a mental inventory of your surroundings; you'll gauge your environment based on a preconceived baseline of behavior and start to look for people or actions that rise above that baseline.

3. Condition Orange: At this stage, you have identified something that could be perceived as a threat, and you've narrowed your attention to that specific person or area. The transition from condition yellow to orange is subtle. Think about driving to work. When you're driving, you're maintaining a consistent condition-yellow level of awareness (hopefully). Suddenly the car in front of you arouses your suspicion; maybe it looks like the driver is about to merge into your lane without checking his blind spot or signaling. You instantly notice this behavior and shift your level of awareness to orange to accommodate his actions. This is also the stage where you begin to put together spontaneous plans. Once the perceived threat has passed, it's easy to transition from condition orange back to yellow.

4. Condition Red: This is where you find yourself right before you act on your plans. In condition orange, you spotted a perceived threat and began the planning stages for an appropriate reaction. In condition red, the threat has materialized, and it's time to put those plans into action. This is where the heart rate becomes elevated, and the fight, flight, or freeze responses are triggered. Your body prepares itself for confrontation, and the adrenaline starts pumping into your system. Condition red is where your level of training has a significant impact on how the situation is resolved.

5. Condition Black: Condition black is much like condition white in that you do not want to find yourself there when the fight starts. Condition black is characterized by an excessively elevated heart rate (above 175 beats per minute) and a complete loss of cognitive ability. This is due to the lack of training necessary to properly deal with an active, violent threat. A person in condition black lacks the power to process the information being taken in effectively and becomes utterly useless in terms of response.

When it comes to maintaining proper situational awareness, condition yellow is where you want to be. You want to be in that casual, yet observant state that allows you to take in as much information as possible without completely stressing yourself out. That brings us to the next piece of the awareness puzzle, which requires planning. If you're in condition yellow and spot something you perceive as a possible threat, you have to start making plans for a reasonable response to that threat. This triggers what is known as the OODA loop.

The OODA loop is designed to help you quickly assess a situation and create a plan of action. The loop consists of four stages: Observe, Orient, Decide, and Act. Here's what happens in each stage:

It's often said that action is quicker than reaction, but more accurately it's unanticipated action that catches you off guard and slows down your response time. By maintaining a condition-yellow level of awareness, you can more quickly identify possible issues and decrease your reaction times by being forewarned of a potential threat. Most often, the OODA loop process takes from one to three seconds to complete. This space of time is commonly referred to as the reactionary gap and can be decreased with proper training and practice.

What-if games are an extremely effective way to increase situational awareness and decrease reaction times in the event of a violent encounter. These games can be played in any environment and are most effective when you're playing with others. Here's how it's done.

Whenever you're out and about, whether on a shopping errand, picking the kids up from school, or out to dinner with the family, take note of your position within your environment and ask yourself questions about how you would react in certain situations. Start simply and then build on the scenario. You are only limited by your imagination. Here's an example.

The next time you're out to dinner with your friends or family think about this: what if someone enters through the back of the restaurant with a gun and begins shooting randomly? Ask yourself the following questions and determine the safest solution to the problem.

Remember that it's important to think through each scenario you come up with to the most desirable conclusion, which is to escape safely. These what-if games can help you mentally prepare for the unexpected and significantly decrease your reaction times should you find yourself confronted with violence.