Tai Chi Jing Practice | YMAA
Skip to main content
FREE Shipping Order Over $70. (US Only, Conditions apply)    |   Up to 20% Off. Exclusions apply. 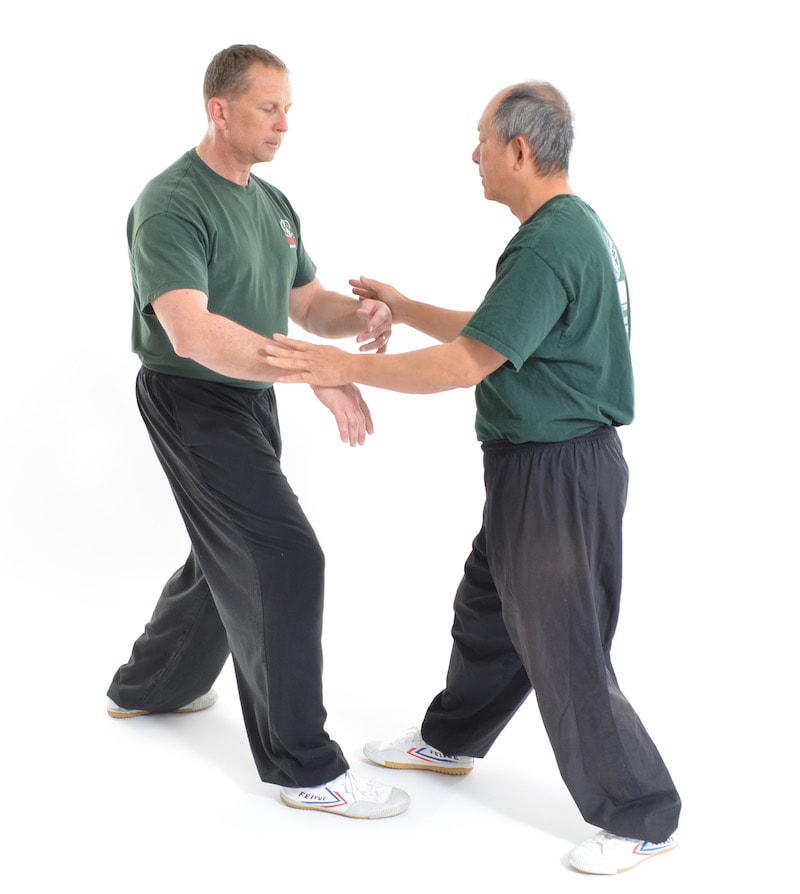 Often jing has been considered a secret transmission in Chinese martial arts society. This is so not only because it was not revealed to most students, but also because it cannot be passed down with words alone. Jing must be experienced. It is said that the master "passes down jing." Once you feel jing done by your master, you know what is meant and can work on it by yourself.

Jing (勁) or martial power training is an important part of the Chinese martial arts, but there is very little written on the subject in English. Theoretically, jing can be defined as "using the concentrated mind to lead the qi to energize the muscles and thus manifest the power to its maximum level." From this, you can see that jing is related to the training of the mind and qi. That means qigong (氣功).

Traditionally, many masters have viewed the higher levels of jing as a secret that should be passed down only to a few trusted students. Almost all Asian martial styles train jing. The differences lie in the depth to which jing is understood, in the different kinds of jing trained, and in the range and characteristics of the emphasized jings. For example, tiger claw (hu zhua, 虎爪) style emphasizes hard and strong jing, imitating the tiger's muscular strength; muscles predominate in most of the techniques. White crane (bai he, 白鶴), dragon (long xing, 龍形), and snake (she xing, 蛇形) are softer styles, and the muscles are used relatively less. In taijiquan (太極拳) and liu he ba fa (六合八 法), the softest styles, soft jing is especially emphasized and muscle usage is cut down to a minimum.

In China, martial styles and martial artists are judged by their jing. How deeply is jing understood and how well is it applied? How strong and effective is it, and how is it coordinated with martial technique? When martial artists perform their art without jing it is called "flower fist and brocade leg" (hua quan xiu tui, 花拳繡腿).

This is to scoff at the martial artist without jing who is weak like a flower and soft like brocade. Like dancing, their art is beautiful but not useful. It is also said, "Train quan and not gong, when you get old, all emptiness." This means that if a martial artist emphasizes only the beauty and smoothness of his forms and doesn't train his gong, then when he gets old, he will have nothing. The "gong" here means "qigong" (氣功) and refers to the cultivation of qi and its coordination with jing to develop the latter to its maximum and to make the techniques effective and alive.

Therefore, if martial artists learn their art without training their "qigong" and "jing gong" (勁功), once they get old the techniques they have learned will be useless because they will have lost their muscular strength.

Often jing has been considered a secret transmission in Chinese martial arts society. This is so not only because it was not revealed to most students, but also because it cannot be passed down with words alone. Jing must be experienced. It is said that the master "passes down jing." Once you feel jing done by your master, you know what is meant and can work on it by yourself. Without an experienced master it is more difficult, but not impossible, to learn about jing. There are general principles and training methods that an experienced martial artist can use to grasp the keys of this practice. If you are interested in this rather substantial subject, please refer to the book: Tai Chi Theory and Martial Power, by YMAA Publications.

There are various jing patterns you may use as a foundation for listening, understanding, attaching, sticking, connecting and following. Before you begin these movements, be sure to properly warm up your body. If you train jing, especially soft jing, you should be aware of possible injuries if you are not cautions.

Breathing and the yi also need to be coordinated to properly manifest jing. You may choose to move slowly first then pick up the speed of the action as your body becomes more comfortable with the movements.

When you train jing, you must be very careful, especially during soft jing training. This is because when you are emitting a strong jing outward, your ligaments and tendons at the joints will be pulled strongly and instantly. It is common to be able to grasp the key of emitting jing (fa jing, 發勁) in a short time. However, it takes a long period of time and correct methods to condition your joints so they are able to bear the sharp and sudden pulling.

Here are a few important keys for your jing training that can prevent a lot of unnecessary injuries.

1. Condition joints. Condition your joints before you train your jing patterns, especially soft jing. Condition means to strengthen the structure of the joints including ligaments, tendons, bones, and any other structure related to endurance and strength. The places that need to be conditioned are the spine, shoulders, elbows, and wrists. The most common places for injury are the spine, shoulders, and elbows. Therefore, the conditioning exercises should be designed especially for these joints. White crane qigong is specially designed for this purpose. After you have mastered all of these qigong movements, then you should hold some weight in your hands, starting with one pound and then increase to five pounds when joints are stronger. If you are interested in this conditioning, please refer to the book and DVD: White Crane Qigong, by YMAA Publication Center.

2. Find an experienced and qualified teacher. It is said in Chinese martial arts society that "jing can only be passed by a master individually." This is because jing cannot be seen easily. The manifestation of jing should be felt. A qualified master will be able to direct you to these feelings correctly. Once you have established these feelings, you can then practice by yourself. This is especially true when soft jing is trained.

3. Train body structure and root. Without correct body structure and a firm root, injuries can occur. Furthermore, in order to manifest your jing efficiently and powerfully, you must have a few firm foundations. In Chinese martial arts society, it is recognized that the body acquires six bows (liu gong, 六弓) that allow you to store the power and then manifest it. These six bows include spine, chest, both legs, and both arms, though some styles consider that the spine and chest (i.e., torso) should be treated as one bow. You must learn how to coordinate these six bows and manifest your power from your legs through your torso and finally in your hands. In Taijiquan Classic, it is said, "Once in motion, every part of the body is light and agile and must be threaded together."

Also it is said, "The root is at the feet, jing is generated from the legs, controlled by the waist, and expressed by the fingers. From the feet to the legs to the waist must be integrated, and one unified qi."  From these statements, you can see that soft jing's manifestation should be executed as a soft whip. In addition, you will also need a firm root. Without a firm root, you will not be able to manifest your jing powerfully.

4. Train hard jing before soft jing. When hard jings are manifested, the body is stiffer. That means the joints are locked. When the joints are locked, the pulling power to the joints is at a minimum. Thus, less damage or injury is likely to occur. Usually, it is the correct way of training a beginner. Only after the joints are conditioned should soft-hard jing be trained. In soft-hard jing training, the body is soft and relaxed first. When the qi has reached to the arms, then the body is tensed for manifestation. That means when the power reaches the end for manifestation, the joints are also tensed and thus protected. Soft jing are the hardest to train since you don't tense the joints when power is manifested. However, you must know the timing for rebounding backward. When you have caught the right timing of rebounding the whip backward, you prevent the ligaments and tendons from pulling. It is difficult to master the trick of soft jing. A qualified teacher will be able to direct you to the correct way of practice.

5. Train short jing before long jing. This is especially true for soft jing training. When you manifest jing for a short range, you must bounce your power backward before the arms are completely extended, thereby protecting the joints. Only when your joints are stronger and endurable, and the timing of your rebounding is correct, should you then gradually increase the long jings' training.

6. Train no more than thirty minutes per day. This is especially true for a beginner. If you train correctly, just thirty minutes of jing training puts your ligaments and tendons in a tolerant situation. If you continue, you may injure yourself. An experienced martial artist should pay attention to the condition of the joints and adjust the time of training.

7. Rest. After training, you need rest. Your ligaments, muscles, and tendons will be sore. Rest and allow them to recover. Do not allow your ego to take over the training. Overdoing the training to sooth your ego often leads to injury. If you like you may do some gentle movements. Gentle joint movements enhance the blood and qi circulation. This will expedite the recovering process.

8. If you're already injured, rest and let it heal. If you find that pain from injury persists, see a good doctor. It often takes a few months for the body to heal the injury. Prevention from injury is the key of long-lasting training.