Understanding Our Digestive System | YMAA
Skip to main content
FREE Shipping Order Over $70. (US Only, Conditions apply)    |   Up to 20% Off. Exclusions apply. 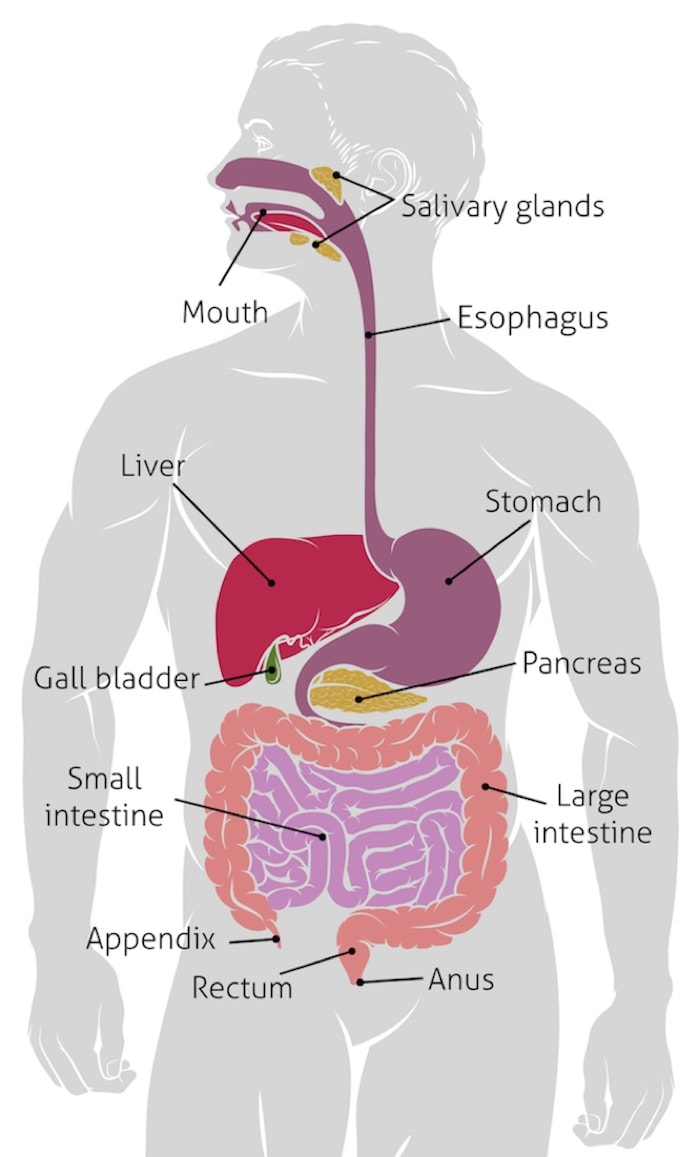 In 2012, an estimated seventy million Americans suffered from gastrointestinal disorders. Illness that arises from these conditions can cause a wide variety of symptoms and can lead to decreased quality of life. The resulting ambulatory care visits, hospitalizations, procedures, and indirect costs such as missed work tallied $142 billion.

Every day we are bombarded by information about the latest "super food," supplement, or nutraceutical that promises us better health and longer life. We are reminded to choose organic produce whenever possible, and arguments abound regarding the "best" diet to follow. But no matter how nutrient-dense the food you eat, you will not receive the benefits if you cannot digest it.

A properly functioning digestive system is of paramount importance. The digestive system encompasses the gastrointestinal tract (including the mouth, esophagus, stomach, and small and large intestines), liver, gallbladder, and pancreas. These organs function together to break down food then absorb the useable portions to be utilized for growth, cell repair, and energy. The process of using energy for these activities of living is called metabolism. The waste products of digestion and metabolism are removed from the body by various organ systems. The digestive system removes the solid waste. The kidneys and bladder remove the liquid waste, and the lungs remove the carbon dioxide that results from the biochemical processes that produce energy.

This is a very complicated process and each component needs to work effectively. Even people who have access to high quality food will become malnourished if their digestive system is unable to extract and absorb the nutrients within. A body that is malnourished will inevitably develop disease. These diseases may stem from increased susceptibility to viruses and bacteria due to a weakened immune system or from a gradual breakdown of the normal physiological processes that keep us functioning. Disordered physiologic processes that are linked to problems within the gastrointestinal system include metabolic conditions such as diabetes and obesity. There is a lot of overlap in the pathophysiology of gastrointestinal disorders, obesity, and diabetes. Some people suffer from all three conditions. The numbers are staggering.

In 2012, an estimated seventy million Americans suffered from gastrointestinal disorders. Illness that arises from these conditions can cause a wide variety of symptoms and can lead to decreased quality of life. The resulting ambulatory care visits, hospitalizations, procedures, and indirect costs such as missed work tallied $142 billion. According to the 2018 update, these statistics have not improved and represent a higher expenditure than for many other diagnostic categories; for example, heart disease ($113 billion).

As of 2016, ninety-three million Americans were obese as measured by their body mass index, and the rates of obesity are accelerating. Over the next three decades, unless this trend is reversed, Americans' life expectancy will be shortened by almost four years because of medical conditions related to obesity such as heart disease and diabetes. Also, during the same time frame, the United States is expected to spend over 13 percent of the total funds allotted to healthcare each year treating the consequences of obesity. This was the highest expected annual expenditure used for obesity related illnesses of the fifty-five countries surveyed in the Organization for Economic Cooperation and Development's 2019 report.

So, about one in five Americans is affected by a digestive disorder, almost one in three is obese, and one in three suffers from diabetes or prediabetes. Cost of caring for Americans with diabetes is more than $245 billion.

Because the gastrointestinal and metabolic system is so complex, many things can go wrong with any of the organs involved in the digestive process. In fact, the National Institute of Diabetes and Digestive and Kidney Diseases gives information about forty different digestive problems alone on their website.

The Anatomy of the Digestive System

In order to understand digestive illness, you must understand your digestive system and how it performs to keep the body well nourished.

Your digestive system is made up of the hollow organs of the gastrointestinal tract (GI tract), plus the liver, pancreas, and gallbladder. The hollow organs of the GI tract are the mouth, esophagus, stomach, small intestine, large intestine, and anus. The liver and pancreas are solid. The gallbladder is actually hollow, but is not attached end-to-end to the hollow tubes like the intestines, so it falls into its own category.

First, so you understand the roadmap of your GI tract, let's outline the route your food takes from the beginning to the end of the GI tract. After food enters your mouth, you chew and swallow it. It then travels down your esophagus into your stomach. From the stomach, the food passes into your small intestine. The small intestine is divided into three parts based on its structure and function. The first part is the duodenum, the jejunum is the middle portion, and the ileum is the third part that connects to the large intestine. The large intestine consists of the appendix, cecum, colon, and rectum. The appendix is a slender pouch about the size of your little finger that is attached to the cecum. The cecum is the first part of the large intestine. The colon, which has three portions, is next. Imagine the colon like a three-sided box outlining the perimeter of your abdomen. The ascending colon starts at the lower right corner and goes up to upper right, near your liver. The transverse colon is draped across the top or abdomen, under your diaphragm.

Your descending colon runs from the left upper corner of your abdomen, near your spleen, down to your rectum. The rectum is the end of the large intestine, where the waste is expelled. The anus is the muscular ring that controls the exit of stool from the rectum. From beginning to end, your GI tract measures over thirty feet when unraveled.

The Function of the Digestive System

Your digestive system is designed to take the food you eat and break it down into its component parts called nutrients. There are different types of nutrients that are absorbed into your bloodstream and act as building blocks within your body to support growth and cell repair. Some nutrients are broken down further to supply the energy you need to simply live and breathe. You need all the different nutrient groups to stay healthy—proteins, fats, carbohydrates, vitamins, minerals, and water. The larger nutrient molecules undergo various processes and are broken down even further. Proteins are turned into amino acids, fats are broken down to fatty acids and glycerol, and carbohydrates are broken down to simple sugars. Once foods are broken into sufficiently small fragments, your body can absorb them for use in various parts of the body.

Nerves, hormones, and the bacteria that live in your gut have a tremendous influence on this process and the health of your GI tract. This, in turn, determines the health of your entire body, including your brain and emotional well-being. These aspects are mechanical, biochemical, neurological, and hormonal. Both human cells and bacteria are deeply involved. But, before we delve into these intricate components of the digestive system, let's finish discussing the mechanical aspect of digestion.

The Mechanical Aspect of Digestion

So how does the food get from one end of this thirty-foot tract to the other? The first part is fairly obvious. You chew your food and then swallow as your tongue pushes the food into the back of your throat. After it leaves your mouth, your food is now in your esophagus. At this point, your brain becomes aware that your esophagus is stretched out and sends signals to the esophageal muscles to contract in a particular fashion. This contraction pattern is called peristalsis.

Peristalsis is the process by which the muscular walls of the GI tract contract and move your food through your digestive system. The muscles behind the mass of food you've chewed and swallowed (called the bolus) get tight and push the food along the GI tract. Imagine squeezing toothpaste from the back of the tube to the tip and you will get the idea. At the same time, the muscles of the GI tract in front of your food relax so that the food can move forward. The process of peristalsis is also responsible for the mixing of your food to break it down mechanically. Peristalsis is an automatic process, controlled by the parasympathetic branch of the autonomic nervous system.

While in the stomach, your food is mixed with digestive juices. This slurry of food and digestive juices is called "chyme." Your food reaches the consistency of chyme through the movement of muscles of the stomach wall, which are very strong. If you have ever felt like your stomach was churning, you were right!

From the stomach, the chyme passes through another sphincter to reach the first part of the small intestine, the duodenum. Here, the chyme is exposed to components of the body's digestive juices from the pancreas and the liver. Digestive enzymes from the pancreas and bile from the liver that is stored in the gallbladder all join together via a system of ducts. The smaller ducts flow into larger ones until they finally amalgamate into one duct that empties into the duodenum. The duodenum itself also secretes enzymes and hormones that regulate peristalsis and mechanical processing of the chyme.

As your food travels through the remainder of the small intestine via the process of peristalsis, nutrients and water are absorbed into your bloodstream through the wall of the small intestine. This process of absorption is intricate, and its disruption may be the cause of many chronic illnesses. Once in the veins of the intestines, the nutrients are carried to the liver where they undergo processing before being sent to the heart and pumped out to the rest of your body.

What remains of your food enters your large intestine. It is considered a waste product, but even at this stage, water is absorbed and some undigested food is further broken down by bacteria. This allows you to access more energy and nutrients. With most of the water removed, this waste product becomes stool. Finally, the muscular contractions of peristalsis move the stool into your rectum, where it is kept until you have a bowel movement, pushing it out and completing the process.

The above is an excerpt from True Wellness for Your Gut: How to Combine the Best of Western and Eastern Medicine for Optimal Digestion, Glucose Metabolism and Weight Control by Catherine Kurosu, MD, LAc and Aihan Kuhn, CMD, OBT, Published by YMAA Publication Center, Pub Date October, 2020, ISBN: 9781594397455 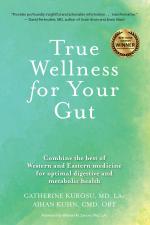