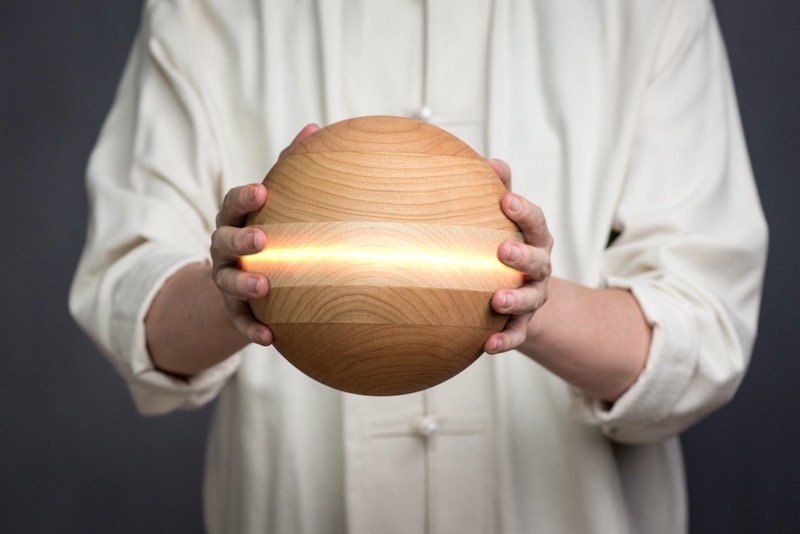 Taiji ball qigong training is a qigong exercise practice that uses balls of various sizes and materials to train the mind and body to higher levels of conditioning for both health and martial arts. It was derived from Da Mo's muscle/tendon changing and marrow/brain washing qigong (yi jin jing/xi sui jing, 易筋經／洗髓經). Muscle/tendon changing is used to condition the physical body from weak to strong so the jing manifested can be powerful and effective. Marrow/brain washing trains a practitioner in how to use the mind to lead the qi to circulate through the entire body more efficiently. In addition, this training also focuses on how to store the qi in the bone marrow and to lead the qi upward through the thrusting vessel (i.e., chong mai, 衝脈) to the brain to raise up the spirit of vitality (jing shen, 精神). When the spirit is raised, the fighting morale will be high and the entire body can be a powerful and effective fighting unit. This qigong was commonly practiced in ancient times when martial arts played an important role in society.

Traditionally, taiji ball qigong training was a very important training for many external and internal styles. The reason it is so effective is because taiji ball qigong, using wood (internal styles) or rock (external styles) balls in the hands, helps focus the training in round movements. Consequently, this training is able to increase the endurance, strength, mobility, and flexibility of the practitioner's physical body, especially the torso. Not only that, taiji ball qigong trains a practitioner in how to use their mind to lead the qi more efficiently so the power can be manifested to its maximum strength. Two-person exercises allow the practitioner to increase their sensitivity to an opposing force and enhance the ability to neutralize the force. The trainings used to practice the patterns were usually created following a style's specialties and techniques.

Due to their effectiveness and efficiency in training a student to become a proficient fighter, the training methods were usually kept secret. It was also because this secrecy that the training has almost become lost today. Now, only a few old masters actually know it.

In taijiquan, training taiji ball qigong can offer you the following benefits:

As you can see there are many benefits of taiji ball qigong training. Taiji ball qigong is probably one of the most effective and efficient qigong practices for both martial arts and health. It emphasizes not just physical, but also mental training. If you are interested in taiji ball qigong, please refer to our book and video Tai Chi Ball Qigong, which can be found at YMAA Publication Center.

Keep in mind, to properly train taiji ball, it is highly recommended you begin your training with the solo exercises of circling, rotating, and wrap-coiling before attempting to train the advanced levels of exercises.

The training of this gong (i.e., gongfu) can be divided into three levels. The first level is taiji ball practice without a ball. The training of this level aims for the smoothness of the basic movements, using the yi to lead the qi, and also the harmonization and coordination of the internal ball and external ball. The internal ball is hidden internally at the real dan tian which belongs to yin, while the external ball is manifested externally between the palms and belongs to yang. From the internal ball's rotating and circular movements, the patterns are delivered to the external ball through the spine. At the beginning, the movements are slow so the effect of using the yi to lead the qi can be achieved. When the movements are slow, the feeling can be deep. This means the gongfu of internal vision (i.e., feeling) can also be deep. When the feeling is deep, the yi can also reach deeply. In this case, the state of leading the qi to "no place cannot be reached" can be achieved.

There are three levels of taiji ball training: training without a ball, training with a ball and, again,training without a ball. The first level of training focuses on the physical movements of the spine and body and the imaginary ball. You also begin to feel a secondary ball located within the lower dan tian. Movement is initiated from this internal ball, follows the path up through the spine and is externally manifested between the palms. While you are doing this, not only can the movements be directed by the waist, the qi can also be led though grand circulation from the real dan tian smoothly to the palms.

At the beginning of the training, the movements should be slow, which allows your yi to reach a deeper level of activating body movement. In addition, this will help you use your mind to lead the qi through grand circulation. If your yi can reach to the skin and beyond (i.e., guardian qi)(wei qi, 衛氣) as well as to the marrow (i.e., marrow qi) (sui qi, 髓氣), then you will be able to store the qi using the bone marrow and also manifest it externally to the skin surface for power manifestation.

After practicing to proficiency in the first level, so that the twelve basic movements can be as smooth as you wish, you can then hold a taiji ball and again train the twelve basic movements. Generally, a taiji ball can be made from wood or stone. Those who emphasize training li (i.e., muscular power) usually use a stone ball while those who emphasize training qi usually use a wooden ball. Those who practice taijiquan like to use a wooden ball simply because it can be used to train qi.

At the beginning, use a ball that is smaller, lighter, and less dense. After the muscles/tendons and bones have become stronger, then use a ball that is heavier, larger, and denser. Also at the beginning, due to the weight of the ball, the muscles are more tensed and consequently the qi is hard to circulate. However, after practicing for a period of time, the body becomes stronger and this will allow (you) to be more relaxed. Only then (you) will advance further and use (your) mind to lead the qi following the fibers of the wooden ball to communicate between the palms. This can gradually change to go against the fibers and again use the yi to lead the qi to communicate between the palms.

Once you have become proficient in the twelve basic movements of taiji ball training you will begin training with a ball. External styles, which focus on the strength of the muscles and tendons at the beginning, usually use a stone ball for this training. However, internal stylists favor a ball made from wood, which allows them to lead the qi through the ball more easily and smoothly.

Training at this level will cause a temporary stagnation to the flow of qi. This is due to the physical weight of the ball being added to the body that in turn will cause you to be somewhat tense. Over time your body will adapt and the tension will disappear. Qi will once again flow smoothly.

Initially, you will train with the grain of the wood being perpendicular to your hands. This will assist in the flow of qi from hand to hand. When you are able to pass qi easily through the ball you will change the direction of the grain to face parallel to the hands. If you are still able to communicate the qi between both palms, you have reached a profound level of taiji ball qigong.

The last level of practice is returning to the stage of practice without a ball. At this time, because there is no wood, the body can reach to its extreme state of relaxation and softness, the yi can reach its peak, and the qi can be lead as you wish without stagnation. In this case, the achievement for both internal and external goals have been accomplished. When using (these skills) to push hands or encounter an opponent, there is more than enough capability to handle the job.

The final stage of taiji ball training is repeating the twelve patterns without a ball. Your body will be able to reach its maximum relaxation and softness, your mind will be strong, and you will be able to lead the qi strongly and effectively.