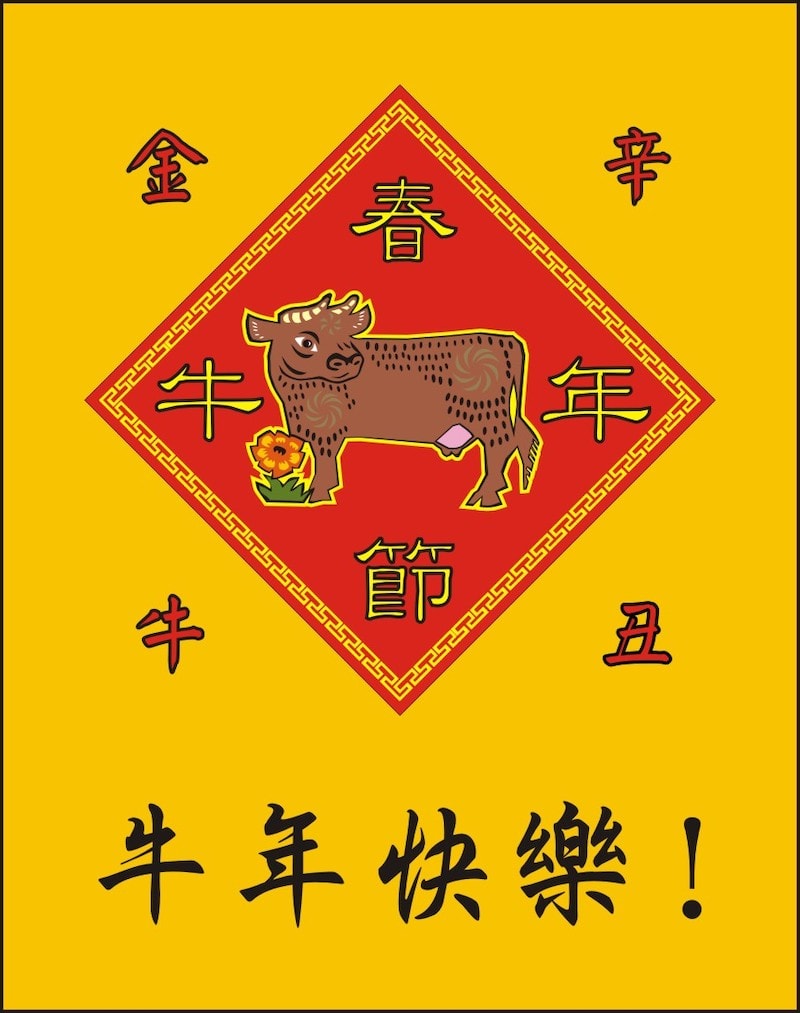 [Author note:  Mandarin pronunciations are transcribed below using the pinyin system. Pronunciation in other dialects, such as Cantonese, can be quite different.]

The Chinese calendar is lunisolar (not purely lunar). Months begin with the new moon (when it is darkest). New Year's Day usually falls on the second new moon after the winter solstice. The year 1 on the Chinese calendar corresponds to the first reign year of the legendary Yellow Emperor (黃帝; pinyin: Huángdì), who is said to have invented the calendar during the 61st year of his reign.

A lesser known cycle is that of the five phases (五行; pinyin: wǔ-xíng): wood (木; pinyin: mù), fire (火; pinyin: huǒ), earth (土; pinyin: tǔ), metal (金; pinyin: jīn) and water (水; pinyin: shuǐ). The combination of phases and animals produces a 60-year cycle, so that a 60th birthday is special cause for celebration. 2021 is a year of the Metal Ox. Persons born in a Metal Ox year are thought to be even harder working and more conscientious, but less sensitive to others' feelings than those born in other Ox years.

Behind the phases and animals is a system of timekeeping involving the ten "heavenly stems" (天干; pinyin: tiāngān) and twelve "earthly branches" (地支; pinyin: dìzhī). The heavenly stems (甲乙丙丁戊己庚辛壬癸) were used from Shang Dynasty (商; pinyin: Shāng; 1554-1046 BCE) times as names for the ten days of the week. They later came to be correlated to the five phases (two per phase, in the order wood, wood, fire, fire, earth, earth, metal, metal, water, water). The twelve earthly branches (子丑寅卯辰巳午未申酉戌亥), likely devised to relate to the years of the nearly twelve-year orbital period of Jupiter, came—after a thousand or so years—to be

Another lesser known aspect of Chinese astrology is that the years alternate between yin (陰; pinyin: yīn) and yang (陽; pinyin: yáng). Because there is an even number of zodiac animals, each animal is considered either yin or yang. The ox is a yin animal.

At Chinese New Year celebrations people commonly wear red clothes, decorate with spring festival couplets (春聯; pinyin: chūnlián) on red paper, and give gifts of "lucky money" in red envelopes (紅包; pinyin: hóngbāo). They also set off fireworks. Both the color red and loud noises were originally thought to scare off a horrible beast that was believed to leave its lair each year at this time to feast on villagers. The Chinese word for "year" (年; pinyin: nián) originates from the name of this beast.

In some areas of China, it's a popular custom to give oranges because the word used to say "orange" in those areas (橘; pinyin: jú) sounds similar to another word which means "good luck" (吉; pinyin: jí). People present oranges to their friends and relatives to express their respects and good wishes for the coming year. Two additional foods whose names are associated with auspicious words are fish (魚; pinyin: yú), which is pronounced the same as "surplus" (餘), and New Year's cake (年糕; pinyin: niángāo), which is homophonous with "venerable" (年高). Chinese dumplings (餃子; pinyin: jiǎozi) also carry special symbolism because they are shaped to resemble ingots of gold or silver (the appropriate color resulting from pan frying or boiling, respectively).

Milan Vigil is the director of YMAA Taijiquan of Memphis. He has studied taijiquan, Qigong, and qin na with Dr. Yang, Jwing-Ming since 1989. He has assisted Dr. Yang in seminars in the United States, South America, and throughout Europe. He was awarded a gold medal at the 2008 World Cup T'ai Chi Ch'uan Championship in Taipei, was a presenter at the 2009 International T'ai Chi Ch'uan Symposium, and was featured in the 2016 and 2017 Tai Chi Spirit calendars.