Chinese Early Sword Development | YMAA
Skip to main content
FREE Shipping Order Over $70. (US Only, Conditions apply)    |   Up to 20% Off. Exclusions apply. 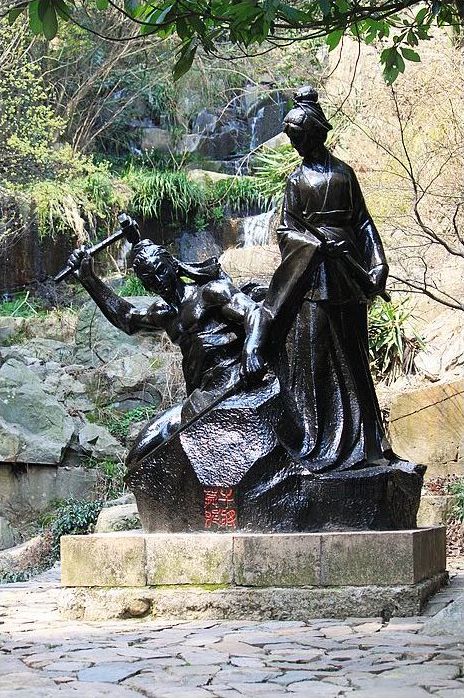 The Chinese word for weapon, Bingqi originated as the word for a group of weapons including the lance, spear, halberd, pronged spear, sword, and saber. Chinese people certainly used more primitive weapons than these before the advent of the language to describe them. The prehistoric Chinese, like other societies, probably utilized the sticks and stones that lay about.

The evolution in Chinese weapons, from stones picked from the river to intri- cately carved swords made of metal alloys to guns, took nearly 5,000 years. Only recently have martial artists sought to resurrect the art of ancient Chinese weapons. Now, martial artists appreciate the weapon as an art form or exercise aid rather than as a necessary tool for combat.

The Chinese word for weapon, Bingqi originated as the word for a group of weapons including the lance, spear, halberd, pronged spear, sword, and saber. Chinese people certainly used more primitive weapons than these before the advent of the language to describe them. The prehistoric Chinese, like other societies, probably utilized the sticks and stones that lay about.

Prior to Shen Nong (2700 B.C.), weapons were very simple. A small stone picked up from a nearby river bed was probably the state of the art. But soon, someone discovered that a stone tied to a stick could be thrown with greater force and accuracy. Then, someone found that one stone could be used to chip and polish another to a sharp point to create a deadlier weapon. Eventually, people of this ancient society developed their first axes and spears.

Not until the time of the first recorded emperor, Huang Di (2690-2590 B.C.), does evidence exist for advanced weapons made of material other than stone. Huang Di, called the "Yellow Emperor" because he occupied the territory near the Yellow River, had weapons made of jade, copper, and gold. This period, therefore, traditionally marks the beginning of the metallurgical sciences in arms manufacturing in China.

Knowledge of Huang Di's weapons is derived from discoveries near Zhuo Lu of knives and swords—remnants of ancient battles between the Emperor's forces and those of Chi You. Fighting between Huang Di and Chi You also introduced the battle axe into warfare for the first time. Legend has it that Xuan Niu (Huang Di's great-great-granddaughter) made an axe of gold engraved with a figure of a phoenix holding a sword in its mouth.

Metallurgical advances continued in China, and by the Shang Dynasty (1751-1111 B.C.), weapons made of copper alloys were in use. Bronze weapons ushered in this era, but by its close ironware had come into being.

As the power in the Zhou Dynasty diminished, the Emperor's control weakened and China was thrust into a series of civil wars. This time is known as the Spring and Autumn Period (722-484 B.C.,) and the Warring States Period (403-222 B.C.,) Each of the many warring factions strove to produce stronger and sharper weapons. Sword makers of the day were held in the highest regard. Three of the most famous sword makers of that period were Ou Ye Zi, Gan Jiang, and Mo Xie.

Ou Ye Zi forged two very famous swords, Ju Que and Zhan Lu. It is said that these swords were so sharp that if dipped in water they would be withdrawn perfectly dry.

Gan Jiang and Mo Xie were husband and wife. The male and female swords that they made bear their names and have a remarkable history. The legends tell how Mo Xie obtained two gold nuggets, each the size of her fist. Gan Jiang decided to forge them into a pair of swords. He built a sword oven on the top of Si Ming Mountain in Zhejiang Province and placed the gold inside. For three years, he heated the gold day and night but to no avail. In the fourth year, the two nuggets glowed brilliantly and rattled around the oven. Gan Jiang reasoned that the gold had not melted because no human blood had been sprinkled on it. After talking with Mo Xie, Gan Jiang prepared himself for sacrifice. He washed himself, cut his hair and fingernails, and jumped into the flaming oven. Immediately one of the nuggets melted and the Gan Jiang sword was made.

The other nugget remained solid and Mo Xie mourned for her husband. To be reunited, she leapt into the oven, the gold melted, and the Mo Xie sword was forged. The story spread quickly and Gan Jiang and Mo Xie became famous throughout China.

Of course, Mo Xie and Gan Jiang never physically threw themselves into an oven to forge their swords. The story acts as a metaphor for the great personal sacrifice that premier sword makers gave to their art. The time and energy required for forging fine weapons was all-consuming. Mo Xie and Gan Jiang may not have died for their swords, but they certainly lived for them.

The story of Mo Xie and Gan Jiang continues with the Wu emperor, He Lu, who possessed the swords and had them buried with him when he died. The swords remained hidden for 600 years. Then, in Nanchang, a scholar named Zhang Hue received a sign leading him to the swords. He witnessed a brilliant light in the sky between Tian Niu Star and Niu Er Star directing him to Suzhou, a thousand miles away. Searching in the provincial court of Suzhou, he found the Gan Jiang and Mo Xie swords at the bottom of a well in a garden.

Zhang Hua was ecstatic with his fortune and told his friend Lei Huan. Giving him Mo Xie, he asked Lei Huan to take it to a sword maker at Luoyang in Henan Province to have two similar swords made. On his way to Henan, Lei Huan's boat capsized in the Yangtze River. Both he and the Mo Xie sword were lost.

Three years later, Zhang Hua visited Loyang. Carrying the Gan Jiang sword, he traveled the very path where Mo Xie was lost. Suddenly, Gan Jiang sang out loudly. As Zhang Hua pulled out the sword, it flashed a brilliant light and leapt out of his hand into the river, thus reuniting the two swords and finishing the tale.

At the close of the Zhou Dynasty, Emperor Qin took power. The Qin Dynasty, which lasted only fifteen years (221-206 B.C.) produced no new developments in weapons. However, the Qin Dynasty is famous for the exploits of the Emperor Qin Shi who was responsible for making the "Sword Pond."

Emperor Qin Shi heard tales about Wu Emperor He Lu, who had collected tens of thousands of swords from all over China. When he died, he supposedly had the swords buried with him. Emperor Qin Shi, nearly 300 years later, wanted those weapons. He ordered his men to dig a hole in Suzhou where the swords were thought to be. After many years of searching and digging, the Emperor had only a large hole for his efforts. Eventually, the pit filled with water and came to be known as Sword Pond.

Emperor Qin Shi heard tales about Wu Emperor He Lu, who had collected tens of thousands of swords from all over China. When he died, he supposedly had the swords buried with him. Emperor Qin Shi, nearly 300 years later, wanted those weapons. He ordered his men to dig a hole in Suzhou where the swords were thought to be. After many years of searching and digging, the Emperor had only a large hole for his efforts. Eventually, the pit filled with water and came to be known as Sword Pond.

After the Qin Dynasty came the Han Dynasty (206 B.C.-220 A.D.,) The beginning of this era witnesses the first book about martial weapons fabrication. The book, Huai Nan Wan Hua Shu (Huai Nan's Thousand Crafts) detailed metallurgical techniques in which the author described methods for alloying iron instead of copper to forge more progressive metal weapons than had previously been possible. The Han Dynasty also had the first contact with a foreign race. For the first time in Chinese history, people from the north and west of China entered the country in significant numbers. The ensuing conflicts produced a mixture of weapons and fighting styles.

Story of the Long Knife

The Three Kingdoms Dynasty followed the Han Dynasty and lasted 60 years (220-280 A.D.). The kingdoms of Cao-Cao, Liu Bei, and Sun Quan added much to the history of martial weapons in China. King Liu Bei is known for a story about a famous sword maker of the kingdom called Pu Yuan, who played the key role in advancing weapons design.

The story begins with Liu Bei trying to reunite China under his rule. He occupied Shu, which today is Sichuan Province in western China. As a descendant of the Han imperial family, he felt it was his duty to reunite China. To find the most talented men in the army, Liu Bei often presided over martial contests. One day, two men came before him in the arena. One had an iron rod, the other a long knife. As the two men fought, the rod holder gained advantage and brought the rod down toward the face of the knife wielder. To everyone's amazement, the rod snapped in two with a loud crack and sparks flew as it hit the knife.

Liu Bei stopped the fighting to ask who made the knife. "Pu Yuan" came the reply. Immediately, Liu Bei sent for the gifted weapon-maker and ordered 5,000 knives for his army.

Pu Yuan was a blacksmith's son who grew up with the forge as his playmate. Helping his father shape ironware, he was already an accomplished blacksmith by his fifteenth birthday. Pu Yuan, fascinated with making blades stronger, strove day and night to find the key. One day, while holding a red-hot knife, he pondered the problem of how it could be strengthened.

For many minutes he thought with no insights and then, not realizing it had cooled, began pounding the knife. He pounded but could not shape the blade. Suddenly, inspiration struck. If the iron, which is soft when hot, hardened as it cooled slowly, would it not be harder if cooled quickly? Testing his new idea, Pu Yuan heated the blade and thrust it into cool water. When the steam lifted, he took the blade and chopped at the iron test pad. The iron pad was deeply cut, but the blade was unscathed. Pu Yuan had discovered the secret of water-quenching. He and the knife, called "miraculous knife," which "cut iron as if it were cutting mud" became famous throughout China.

The period from the close of the Three Kingdoms to the beginning of the Liang Dynasty in 502 A.D. was rather unremarkable in the evolution of martial weapons.