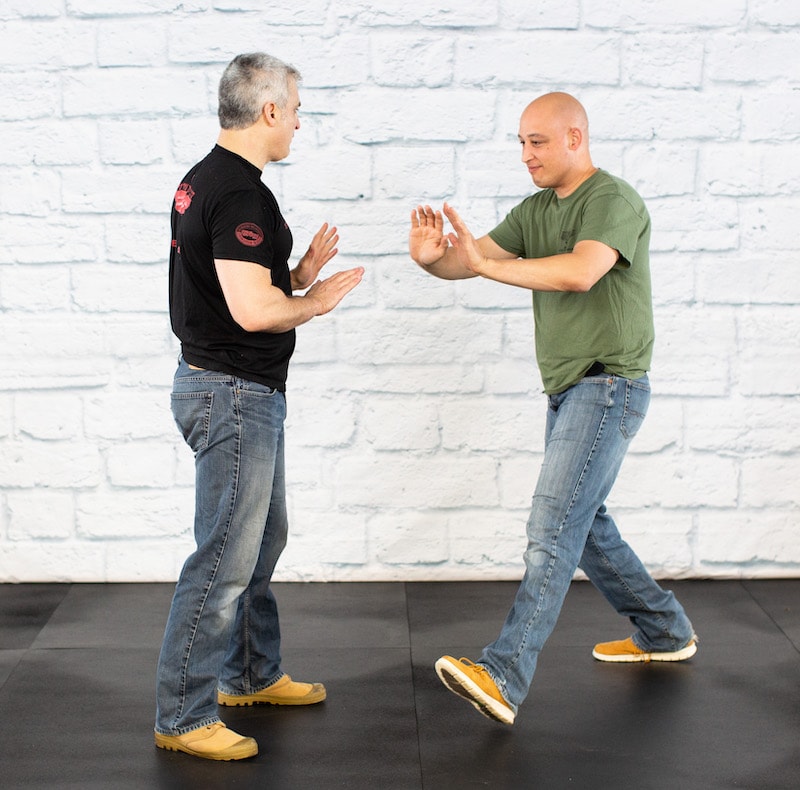 As with all self-defense combatives there is a legal side, should you apply a joint lock on someone. Not only do you risk civil and criminal charges of battery, you might also face the risk of being convicted of false imprisonment.

Aggression often begins with a one-or two-handed push. This provocation typically marks an aggressor's attempt to assert social dominance or to goad you into a fight. Someone pushing you away may also be antagonized by your invading his personal space. Push defenses, as with all krav maga defenses, involve the all-important krav maga concept of simultaneous defense and attack or, alternatively, the immediate decisive control of an aggressor. As the defender, when possible, your preference should always be to move off the line of attack, in this case, the line of the attacker's push. One option is to simply sidestep and parry away the push to let the aggressor move past you. Another option is to escalate matters (or de-escalate matters in an unorthodox use of the term by) using a decisive control position.

The featured push defense of this article revolves around Police Hold Number Eight.  From your low ready position, this defense relies on correct time to sidestep the attacker's push and lock the attacker's extended arm out to force him to the ground into Krav Maga's main police control position. The underlying principle of a joint lock is to force or hyperextend the joint, the elbow joint in this case, beyond its natural range and articulation. 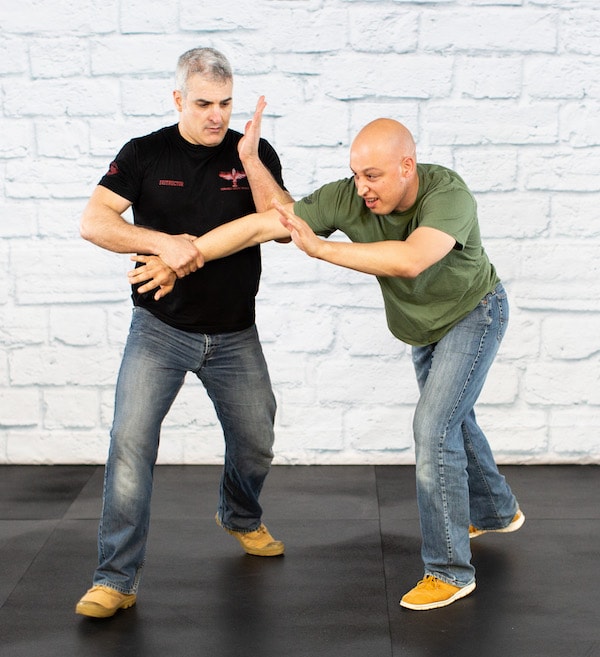 Obviously, you may not always be able to attack the attacker or preempt his aggression. If you are caught unaware or recognize the incoming attack late, you will need to capitalize on the advantageous small window of opportunity that defending any attack affords. This counterattack window is dependent on your recognition and timing as presented by the attacker as he commits to his attack.By closing the distance or extending a limb, he presents some type of vulnerable anatomical target for you take advantage of and counterattack.

Keep in mind that if you feel compelled to take someone to the ground, while on the ground you are highly vulnerable to third parties attacking you, especially with kicks. Krav maga makes every effort not to go to the ground. Imi Lichtenfeld's (founder of krav maga) system is rooted in this strategy, because he was often outnumbered, and purposefully going to the ground, despite his champion wrestling background, could lead to serious injury at the feet and hands of his anti-Semitic adversaries. Nevertheless, if you feel you must drop to the ground to maximally effect the hold by using your body weight on top of your attacker, next consider what you are going to do with him once you have him "locked down."

For a ground-based (or standing) lock, your attacker might realize that you are highly trained and mean business and continued aggression would just get him injured, and so he might adopt a position of contrition and comply. Alternatively, you might have embarrassed him and he might get up spoiling for a fight or even draw a weapon to threaten or attack you. Therefore, should you orchestrate this type of control hold, you had better have a game plan to reason any further aggression out of him.

This defense may be used if you have your hands in a low ready position with your body bladed. This low ready position serves as both a de-escalation and prepared defensive position. By not raising your arms fully to your eyebrows in a defensive posture (thereby possibly demonstrating aggression to the aggressor [and witnesses]) with your palms up facing the aggressor, you appear to be in a "reasoning" position facing toward the aggressor. If the attacker uses one arm or two arms to push by using his nearside arm, this position readily allows you to deflect the attacker's incoming arm(s) while also facilitating a body defense. Rotate your front arm using a modified chop or L-parry to deflect the attacker's incoming arms combined with a sidestep tai sabaki body defense. Importantly in krav maga, the hand always leads the body by intercepting or deflecting the incoming strike a fraction of a second before the combined body defense follows.

While asserting dominant control, forcefully drive the assailant to the ground at your two o'clock, not your twelve o'clock as he might try to roll on you. As you take down the assailant, be sure to continue to keep his torso close to your torso to prevent any attempt to roll away from you as you drive him to the ground. You may then use your torso to push forward on the attacker's wrist to create a lock that will force him to collapse his outstretched arm.  As he drops down, drop with him landing your left knee astride his bent elbow and your right knee his shoulder, not his neck or his head.  Place the majority of your body weight on him to control him by staying on the balls of your feet.

The self-defense world teaches many formidable joint control locks and takedowns, but often little thought is given about what you do once you have an attacker on the ground, other than summoning law enforcement—which is nearly always the best choice. It must be underscored that anyone who has had to control or restrain a determined resisting subject ("controlee") understands the difficulty of applying minimum objectively reasonable use of force controls.

Crucially, once again, thoroughly consider what you will do with someone once you have him "locked" down (or in a standing lock) as the case may be. Keep in mind if you use a control hold, you must decide how you will de-escalate the situation. What are you going to say to him to calm the situation down? Will you yell for someone to call the police?  What reasoning from a position of dominance can you offer to forestall any further violence? Perhaps you might authoritatively declare, "Hey man, I don't want to injure you.  I'm going to get up now.  It's over." Alternatively, you can assert, "You grabbed me.  If you want, we'll just wait it out until the cops show up.  I have witnesses that you attacked me and I acted in self-defense. Another choice is that I can get up now and walk away if you agree walk away and it's over." Of course, common- sense dictates that you do not turn your back on this aggressor, as he may feign compliance and then attack you.

Keep in mind you can be charged with "false imprisonment" if you detain someone against his will. Of course, in this case, the aggressor pushed you, but you must always beware of liability in the use of self-defense.  As with all self-defense combatives there is a legal side, should you apply a joint lock on someone. Not only do you risk civil and criminal charges of battery, you might also face the risk of being convicted of false imprisonment. For instance, a false imprisonment statute is readily found in New Jersey 2C:13-3 (I am using New Jersey statues as an example, since our civilian training centers are located there).  According to the NJ statute concerning false imprisonment:

A person commits a disorderly person's offense if he knowingly restrains another unlawfully so as to interfere substantially with his liberty.

In New Jersey, under this statute, if you are convicted of false imprisonment, you could face up to six months in jail and a fine of up to $1,000. Such a conviction saddles you with a criminal record. Of course, mitigating factors can lessen the charges. The length of time you detained the person, the nature and extent of the restraint you applied, along with your overall intention when you did the retraining, could possibly influence whether you face a conviction or not.  Therefore, not only does a practical threat-analysis method enable you to avoid danger and violence, it helps you develop a legal and liability shield against arrest and prosecution, should you need to use counter-force. If you must resort to violence to protect yourself, you must be able to explain to a jury why and how you chose your actions and that there were no reasonable alternatives.

A special thanks to Senior Instructor Alec Goenner for his cooperation and modeling for this article and the many photo series in our krav maga books.