Understanding Physiological Reaction to Threats and Violent Conflict | YMAA
Skip to main content
FREE Shipping Order Over $70. (US Only, Conditions apply)    |   Up to 20% Off. Exclusions apply. 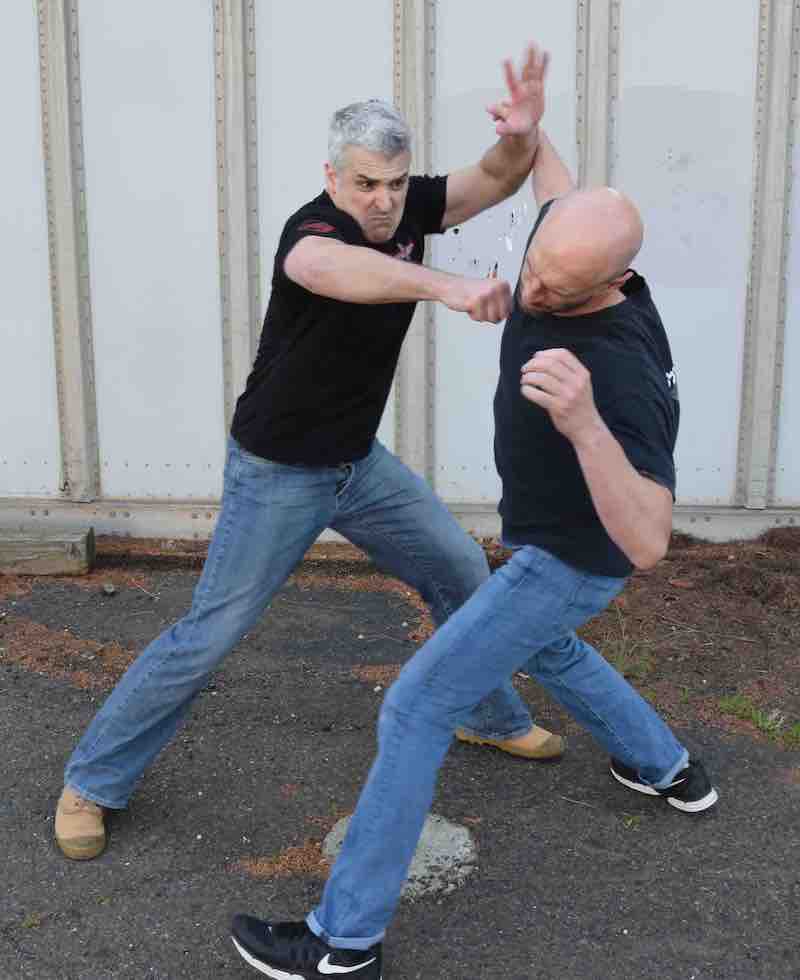 The krav maga curriculum considers the body's natural reactions when facing the specter of serious violence and when actually engaged in extreme violence. From a fighting standpoint, the following key points stand out:

Fear and Your Sympathetic Nervous System

Fighting in an enraged state, while boosting strength and speed, ultimately degrades a skilled fighter's capabilities. An essential difference between hard-core training and a true violent encounter is the activation of the defender's sympathetic nervous system (SNS).

Unfamiliarity with violence obviously makes facing aggression a frightening prospect. Both anxiety and subsequent fear, when triggered in a potentially violent situation, are evolutionarily designed to protect the body. Adrenalized strength coupled with a heightened internal first-aid capability are summoned. Fear triggers certain automatic human responses including physical, emotional, perceptual, and cognitive—triggering the freeze/ fight/ flight reaction. Fear, summoned through the SNS, creates time and distance distortions where actions may be perceived to speed up or slow down. When transformed to panic, fear can also paralyze.

The SNS forms one leg of the triad of your autonomic nervous system. The SNS mobilizes your body's nervous system fight-or- flight response. Immediate SNS activation occurs when you recognize and face imminent violence. Once activated by the perception of possible impending bodily harm, the SNS in turn activates immediate physiological changes by flooding your body with stress hormones. Your freeze, fight, or flight response hits full throttle.

The SNS is thought to counteract or hijack the parasympathetic system, which generally works to promote maintenance of the body at rest. The SNS both enables and disables. Your strength and speed increase while your analytical processing and complex motor skills decrease. Your SNS will not relinquish control until the observed threat is eliminated or you have escaped. Then the parasympathetic nervous system will reassert control.

While the SNS is not consciously controlled, it can apparently be manipulated through training and combat experience. There are four prime variables that have an immediate impact on your SNS activation level, including your:

Once activated, the SNS causes immediate physiological changes, the most noticeable and easily monitored of which is increased heart rate inhibiting your complex motor-skill function. As combat stress increases, heart rate and respiration will increase until catastrophic physiological failure or until your parasympathetic nervous system once again assumes control.

Recall that in a crisis, your heart rate can go from a normal resting rate of about 60–70 BPM to more than 200–300 BPM in a matter of seconds. Optimal survival performance occurs when the heart rate is between 115 and 145 BPM. When your heart rate exceeds 145 BPM, your physical skills and capabilities begin to degrade. Good physical conditioning, deep-rooted confidence in personal abilities, and experience with similar situations in the past can help to keep the heart rate down, and visual and motor-skill performance up. Stress responses include fleeing, freezing in place, posturing, or fighting—or possibly all four in some continual order resulting in counter violence when there is no other choice.

Your heart rate in response to perceived danger is crucial since once you surpass a rate (approximately 175 BPM), your fine and, shortly thereafter, your gross motor skills deteriorate. Once your heart rate reaches 225 BPM, you are likely to become catatonic or freeze in place, no longer capable of functioning to respond to the danger.

The following are some well-documented human responses to a violent situation:

• Tunnel Vision. Under extreme stress, more blood and oxygen may be delivered to your eyes, and your attention may be focused primarily on the greatest threat, resulting in a temporary loss of peripheral vision.

• Auditory Exclusion. As your vision takes over, your hearing will diminish.

• Time and Space Compress (Tachypsyschia). Time and space will become muddled and there will be the added difficulty of judging the relationship between speed and distance. Movements may appear in slow-motion.

• Random Distracting thoughts. Your brain struggles with itself to prevent conscious decision-making from interfering with the primordial fight-or-flight mechanism.

• Behavioral Looping. You repeat an action such as asking an assailant to stop again and again while denying that the attack is actually happening. You may delude yourself by not seeing something—however harmful—so you do not have to face it, which can get you maimed or killed.

When confronting a life-threatening situation, shock can be more problematic than fear. If you succumb to shock while under attack, you will freeze, creating possibly life-threatening vulnerabilities. Victims usually go into shock when attacked because of lack of response preparation.

To avoid going into shock under stress, visualize yourself in every possible attack situation in which you may find yourself and as often as your training time allows. Optimally, you will act without thinking, using a conditioned/reflexive response. Train yourself over and over in your mind until you have effective solutions for those situations. Here are a few additional summary points:

• You must develop attack pattern recognition to close the action/reaction curve to your advantage.

•Threat recognition overcomes a startle response/processing delay and prevents your cerebral cortex (the thinking part of the brain) from hijacking the situation to both instinctively, and, hence, instantaneously trigger a trained response. Confidence in one's abilities to handle a violent situation can delay the triggering of the often deleterious delayed response from SNS activation—you won't freeze in inaction.

•With threat recognition, the reaction goal is less than one-tenth of a second using honed gross motor skills (which increase following enactment by the sympathetic nervous system).