False Dignity Gets Its Reward | YMAA
Skip to main content
FREE Shipping Order Over $70. (US Only, Conditions apply)    |   Up to 40% Off. Exclusions apply. 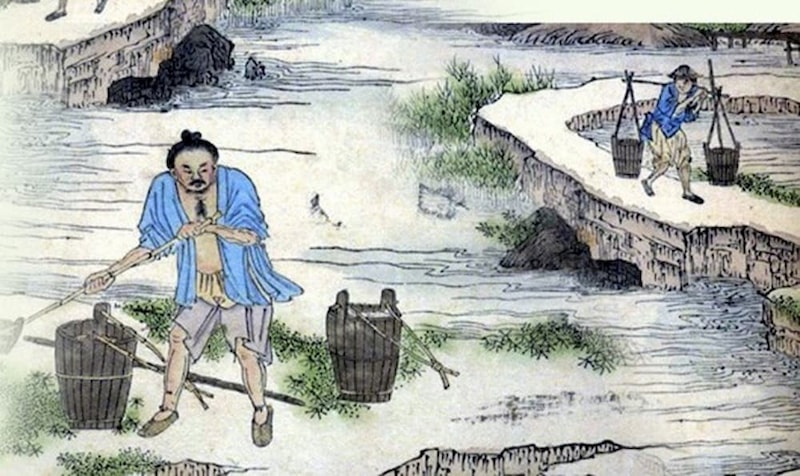 False Dignity Gets Its Reward

In this collection of fables, Dr. Yang, Jwing-Ming shares the stories that have influenced him most as a martial artist and lifelong student of the Dao. They bring the Dao to life for readers of all generations.

Many times we are fooled by our desires, which come from a false sense of dignity. For example, we may tend to show off our wealth to friends; however, someone who is truly wise is content with his talents and his possessions. He lives in humility and kindness.

In the Han dynasty about two thousand years ago in China, there was an old farmer named Chen Yin. For many years, he and his son worked very hard on their few acres of land and had gradually amassed a modest wealth. However, old Chen Yin was not happy. The one thing he regretted in his life was that he had never had any friends in the higher levels of society.

One afternoon, after a severe thunderstorm, Chen's daughter-in- law was washing vegetables by the riverbank. It began to rain again so she hurried home, and on her way back she saw a small boat anchored beside a willow tree not too far away. In the boat was a scholar who wore a handsome gown, which was soaking wet. The scholar's two servants were also soaking wet.

She greeted the boatman, who was an old friend of the family, and he introduced her to the passenger. The scholar's name was named Chen Yin—the same as her father-in-law—and he held a very high rank in the government. When she went home, she told her father-in-law about the coincidence of this high-ranking, elegantly dressed of official having the same name as he did.

Old Mr. Chen picked up an umbrella and hurried to the boat. He said to the scholar, "What a storm! Would you care to take refuge in my poor house, honorable sir?" Feeling cold and hungry, the scholar happily accepted.

Inside, a nice, warm pot of tea was already prepared. When the scholar learned that he and his host had the same name, he was delighted. They drank wine and traced back their family trees as if they were indeed an old, happy family.

Old Chen gave orders for a banquet to be prepared. Then he took the scholar's hand and led him onto the porch, remarking, "I can't complain about the way things have gone in this village. We now own many acres of land. From them, I harvest ginger, taro, and sugarcane every year. There are also many fishponds, mulberry fields, and vegetable gardens. And many kinds of precious herbs are grown in the shade next to the mulberry fields."

Old Mr. Chen took the scholar to the other side of the house to show off some more, hoping to impress the high-ranking officer. He showed him ten tall buildings.

"Those are my granaries," he said, "and those are stalls for the oxen, the sheep, and the hogs. On the left you can see the houses where the tenant farmers live, and also the cottages we rent."

The scholar smiled graciously, his mind dazzled and his eyes greedy.

Dinner was announced, and the best wine and delicacies were served. Old Mr. Chen raised his cup and said, "This brew has been aged more than ten years. We offer it today especially for my honored younger brother."

The young scholar returned his thanks, and soon both were filled with warmth and spirit.

In order to impress the old man, the young scholar now started to brag about his connections in the government.

"Such and such, a governor, is my father's classmate," he said. "A certain first-rank officer is my uncle, and so and so in high government office is my best friend. Actually, I know almost all of the high- ranking officers in this province, and they would grant me any wish I made. In fact, anyone associated with me would be immune to misfortune of any kind."

Old Mr. Chen took it all in with enthusiasm and respect. When the meal was over, the rain had also stopped. It was getting dark, and the scholar had to leave for home even though old Mr. Chen begged him to stay for the night. Sadly, old Mr. Chen watched the scholar depart.

Next morning, old Mr. Chen put on his best clothes, gathered the best gifts he could find, and set sail with a few of his servants. When he arrived at the city, he called on the scholar, who received him cordially. From then on, their friendship deepened. For several years, old Mr. Chen sent the young scholar fresh produce from the farm, as well as preserved meats. However, the grateful scholar was pained that he could not do something useful in return for all the food.

Finally, he came up with an idea. He consulted a good friend, who was a police constable. The policeman arranged for a certain bandit to commit a crime and frame old Mr. Chen for it. Soon, the old man was arrested and put in jail.

Seeking help, old Mr. Chen's son rushed to the home of the scholar.

"Your father has treated me so generously. I will try my very best to save him," the scholar said with tears in his eyes.

"But the crime your father was arrested for is not a minor one. Your father cannot be released simply because I request it. He is involved with a bunch of real bad crooks. Actually, I do have an idea of how I should start," the scholar continued.

"I will spend as much money as I have to, as long as my father is set free," the son said.

The scholar told him how much he would need to bribe the magistrate's clerk, how much for the constable, and so on.

"Bribing these officers from the top to the bottom will take at least ten thousand ounces of silver."

In order to raise the cash, the son sold all their land. He had to give the deeds for the land to the scholar, who took possession of the property in the name of other officers. He also sold all of their possessions and within a year was reduced to absolute poverty.

While in jail, old Mr. Chen felt very grateful for what the scholar was doing on his behalf. Finally, he was released. When he returned home, however, he found that all he had left was his sorrow and his unhappy family.

After a few days, old Mr. Chen calmed down and started to wonder why a bandit he had never met could have wreaked such vengeance upon him. He cooked a chicken and prepared some wine, and took it to the jail. He hoped that the bandit would be grateful for the good meal and tell him why he had caused him so much trouble.

"I have destroyed you and your family, yet you still treat me kindly and come to feed me," the bandit said. "I cannot hide the truth any more. What has happened was plotted by your brother the scholar. It is he who instructed the constables to arrange the whole thing."

Finally, old Mr. Chen started to realize what had actually happened. He went to the scholar's home but was told he was away on a business trip and would not be back for a long, long time.

Unable to see the scholar and vent his anger, old Mr. Chen went home and blamed everything on his daughter-in-law.

"If it weren't for you, the whole thing would never have happened," he said to her.

"I simply mentioned to you that you and the scholar had the same name," she replied. "I did not ask you to get involved with him."

In his anguish, old Mr. Chen cursed her. This caused her such pain she went and hanged herself. Her husband, heartbroken at seeing his wife dead for no reason, also hanged himself. Now, poor old Mr. Chen, alone and without any family or property, put a rope around his own neck too.