Fighting Range Strategies | YMAA
Skip to main content
FREE Shipping Order Over $70. (US Only, Conditions apply)    |   Up to 40% Off. Exclusions apply. 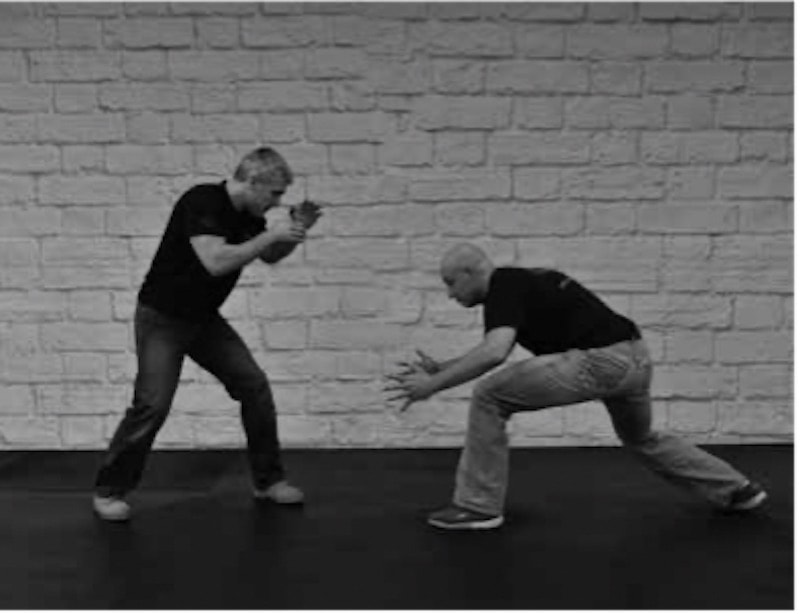 If you cannot overwhelm the attacker and end up temporarily disengaged facing him, you should keep moving to prevent becoming a static target and to camouflage any additional tax you must unleash as you launch into retzev. (Retzev is a Hebrew word that means continuous motion.) In short movement from movement is more difficult to discern then movement from a stationary position.”

In an impending fight, begin to dominate by controlling the attacker's distance and position, along with drawing on your ability to engage in tactical targeting. When the opportunity arises, utilize what is known as the combat circle: let the opponent move wildly around you while you use economy of motion, footwork, and energy conservation. Keep in mind that verbal exchanges and fusillades again often within leg or hand range.

A few general points to incorporate into your self-defense strategy:

The angle between you and your attacker dictates offensive and defensive capabilities for both of you. Superior positioning reduces your need to rely on speed. Your stance facilitates speed and timing by allowing you to orchestrate linear punches and kicks that are much more difficult to intercept than circular attacks. A good stance allows you to defend against all types of attacks. It is crucial to have each of your limbs positioned so they can defend linear and circular strikes, grabs, throws, and takedowns. Once again, you must be comfortably on the balls of your feet to facilitate movement and spring into action.

If you cannot overwhelm the attacker and end up temporarily disengaged facing him, you should keep moving to prevent becoming a static target and to camouflage any additional tax you must unleash as you launch into retzev. (Retzev is a Hebrew word that means continuous motion.) In short movement from movement is more difficult to discern then movement from a stationary position.

Here are some essential fight-range concepts and tactics: 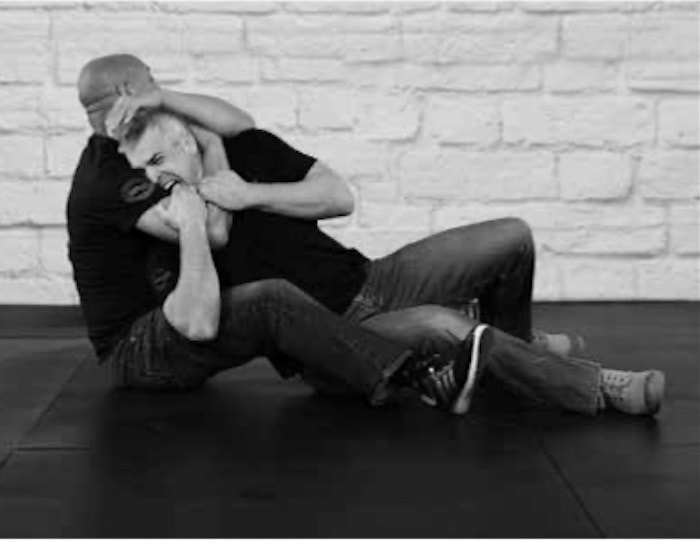 In grappling, it is key that you be able to control your own body, and particularly your balance, while preventing your adversary from controlling his. The center of gravity is generally just below the navel. To disrupt an adversary's balance, you must force the opponent's center of gravity away from both his base leg and his centerline.

Krav maga teaches simple and effective takedowns that usually flow naturally from other techniques to put an opponent on the ground. Think of these techniques as extensions of a previously completed combative technique, such as a gouge to the eyes to disorient an opponent as you perform an outside reverse sweep (osoto gari.) Advanced hip-throws and other takedowns are integral parts of advanced krav maga training.

As noted, selecting a takedown or a throw is generally determined by body positioning and the dynamics of the entry to the throw. As with all krav maga strategy, the goal with throws and takedowns is to have the greatest effect with the least effort. Your aim with any type or throw or takedown is to disrupt the opponent's balance while hastening his impact with the ground. In other words, undercut your adversary's balance by collapsing his structure.

Tactically, this could include crippling one of his knees, sweeping his feet from under him, or picking him up and dropping him pointedly on a specific part of his anatomy. You can disrupt an opponent's base by (1) severing the connection of his feet with the ground; (2) moving him to the edge of his base so his center of gravity falls outside of it; or (3) demol- ishing his stance, forcing his center of gravity beyond his base. Keep in mind that the center of gravity of a moving or non-static threat constantly moves as his base changes.

In short, krav maga takedowns and throws principally distill into two methods: (1) removing the opponent's base (his legs), destroying his balance or (2) forcing his center of gravity (just below the navel for most people) beyond a stable base (his two balanced legs).

This type of combative that forces the opponent to drop unassisted or pounds him into the ground is designed to inflict serious damage such as neck or spinal injury, skull fracture, broken wrist, broken elbow or coccyx, a damaged shoulder, or a concussion. So obviously use this type of combative only when necessary. (Keep in mind that if you trip or throw someone to the ground, a jury will probably conclude that you intended to inflict serious injury.)

Clearly, in a life-and-death violent encounter, you may wish to make the throw as damaging as possible. With a throw or takedown, physics allows you to heighten an impact's velocity by approximately 50 percent by undercutting both of the opponent's legs instead of just one. While you can also maximize impact by adding your body weight if you fall on top of the opponent, krav maga emphasizes remaining standing and mobile whenever possible.

In summary, infighting incorporates many different martial skills including how to tie up, clinch, take down, apply joint/body locks, bludgeon, choke, and strangle an opponent. Accordingly, infighting requires all the skills to be interwoven and used interchangeably. Understand, too, that clinching is a position rather than a specific tactic.

Mixed Martial Arts (MMA) fighters, wrestlers, judoka, and other multi-disciplined skilled fighters with strong takedown and ground tactics excel at controlling an opponent's body movement when grappling, and, ultimately, locked up. Generally, the average person and martial artist alike are untutored in grappling and ground survival. Krav maga teaches you to close on an opponent to disable him. Conversely, he may also attempt to close in on you. This may well lead to a clinching and grappling scenario which, in turn, may lead to a ground survival scenario. Of course, not going to the ground is best, so one's long- and medium-range combatives should be optimized to obviate locking up with anyone. MMA practitioners are skilled at accurately assessing distances and how to measure distance with time and time with distance. Accordingly, a skilled MMA practitioner will patiently wait for the optimum moment to close when you or he (often through a feint) put yourself in a vulnerable position.

Many escalations and stare-downs bring two hostile parties within bad breath range of the parties—ideal clinch range. Many MMA fighters excel at clinching for punishing knee strikes along with throws and takedowns. Therefore, counter-clinch tactics are instrumental in avoiding these potentially debilitating entanglements and, equally important, in avoiding being taken to the ground. Notably, for two unskilled combatants, the progression of a violent encounter often results in some sort of clinch. Keep in mind that takedowns most often result from:

To best defend a takedown, you need to match the adversary's stance height. He will have to initiate to take you down, so exploit his entry. UFC former champion Chuck Liddell excelled in this type of counter-takedown strategy. Keep in mind that he may feint a strike, so you must be prepared to defend a strike followed by a seamless takedown tactic.

The above is an excerpt from Krav Maga Fundamental Strategies: The Contact Combat System of the Israel Defense Forces, by David Kahn, Israeli Krav Maga Association US Chief Instructor. YMAA Publication Center, ISBN: 978-1-59439-813-1.