Some Thoughts About Karate Class | YMAA
Skip to main content
FREE Shipping Order Over $70. (US Only, Conditions apply)    |   Up to 40% Off. Exclusions apply. 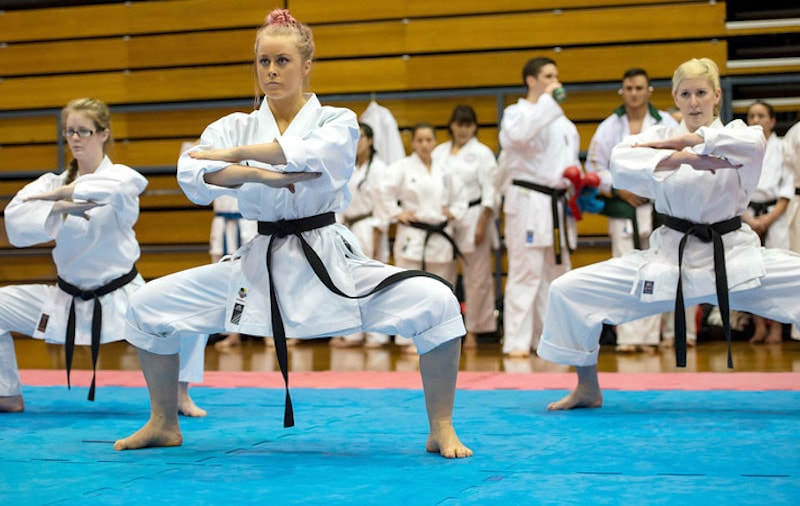 Some Thoughts About Karate Class

Regardless of your physical condition when you begin your training and in spite of the hurdles you’ll encounter during it, strive to keep in mind that you are, underneath it all, an athlete. We all are, by virtue of 300,000 years of evolution.

There have been many, many times I just did not want to attend karate class! In those moments I had a dozen reasons not to go, ranging from kids to work to temptations of a less noble sort. During the years I lived an hour from my dojo, the commute often added to my list of "good" excuses to not train.

I had a dear friend, Daniel Rodman Walker, who passed away in 2001 from complications related to a lifelong struggle with kidney disease. He was a brilliant poet and a deep thinker. We had many tenacious, happy debates. Occasionally I posed what I thought was an unbeatable argument and sat back in my chair, contented with my high-mindedness. Calmly, and only when I needed a good and appropriate drubbing, Danny would trump my point by saying, "You only think that way because you're healthy. Try being unhealthy and see if things change for you." Karate avoidance, I thought in times of reluctance, was one such application of my "healthy thinking" that Danny was unknowingly talking about. I would think of him tethered to a dialysis machine three times a week for six hours. He couldn't even attempt karate. What in the world did I have to whine about?

So, I would play a game with myself. I would "see what happened." I wouldn't go to karate; I would simply go to the car and see what happened. As soon as I turned the ignition key, the book-on-tape would pick up where I'd left off and I was immediately involved. Why not drive and listen at the same time? My goal would then become to drive to a certain point on the journey to the dojo and see what happened when I got there. Invariably, when I'd reach that point, I was already too far along the way to reasonably turn back. Before I knew it, I was in my uniform and in class. Even at that point, there were times I felt less than enthused about being there. But I'd long since developed a mind-set that I'd fall over dead before walking off the dojo floor— even for reason of injury, exhaustion, or anything else—prior to the end of class. I knew once I was on the floor, I was in it until Sensei deigned to release me.

I can't recall for you how many times I felt this reluctance to attend karate. I can tell you, though, without any hesitation and with complete certainty, that every single time I manipulated myself into going to class, regardless of how much I didn't want to go, at the end of class I was glad I had attended it. Sometimes the desire to avoid karate was pronounced (doubting my competence as a karateka), sometimes the reasons seemed quite good (injury, money). Even at those times, when we closed our eyes for mokuso at the end of class, I'd feel the blood pumping through my limbs and the weight of my sweat-drenched gi and be overcome with gratitude. I'd be contemplating the incredible activity I had just participated in when suddenly I'd remember I hadn't wanted to come that night! What if I'd given in to my reluctance? I'd have missed the entire experience! At times the contrast between my initial resistance and my final accomplishment left me emotionally overwhelmed.

An old proverb says, "It is impossible to describe the taste of blowfish to one who has never eaten it." It should always be kept in mind that karate-do cannot be grasped through the eyes and ears alone; it must be experienced and comprehended through physical training. –Master Gichin Funakoshi Karate-Do Nyūmon, 1943

Regardless of your physical condition when you begin your training and in spite of the hurdles you'll encounter during it, strive to keep in mind that you are, underneath it all, an athlete. We all are, by virtue of 300,000 years of evolution. Now you are invited to awaken muscles you've never used (even if you are athletic!) and see what they can do.

You get to do this. Many people can't. Be grateful.

The ethics stated in the dojo kun are inseparable from our decision to study karate. They constitute a critical part of our training. During his chairmanship of the International Shotokan Karate Federation,(ISKF) nearly every time there was a gathering of instructors, Shihan Teruyuki Okazaki emphasized the federation's duty to bring peace to the world. "If we live by Master Funakoshi's principles," he once said, "everything about our lives will fall into place." It is for this reason that Master Okazaki insisted on the use of the dojo kun in all ISKF dojos. Similarly, other federation chairs promulgate these same principles in thousands of karate schools worldwide, and they are heard in unaffiliated dojos as well.

You will hear a senior student speak the first line of the dojo kun. After she does, you will be swept along as it is spiritedly repeated by every student present. Do not rush its annunciation. If you take care to learn each unfamiliar syllable, you will soon find that it brings a comfortable close to a challenging class. Then, in many American schools like mine, the dojo kun is stated in English as well.

Seek perfection of character! Be faithful! Endeavor to excel! Respect others! Refrain from violent behavior!

Anyone would agree that these are sound principles to live by, whether one practices martial arts or not. It is vital, however, that fighting arts are practiced within a principled framework. Only then can we strive toward the excellence that is the promise of diligent training.

"Hitotsu!" (pronounced "Shtōts!") translates as "One thing!" This indicates the equal importance of each of these principles. By repeating these promises after each training, they will become embedded in your psyche enough to influence your behavior. Also, you will discover layers of meaning in each line of the dojo kun as you advance in your awareness of this art and in the subsequent awareness of yourself.

If you arrive after the moment class commences, you attend at the discretion of the instructor. The etiquette of entrance onto a dojo floor changes slightly in this circumstance, and reasonably so: this individual has taken the time to assemble a presentation to benefit you. The least you could do is show up for it! I once had a college professor whose door would slam like a portcullis—or perhaps more like a guillotine—precisely at the designated class start time. You couldn't get in even if you were held up by a car accident.

I have a different attitude for my own classes. I want my students there as much as they possibly can be. An adult student once told me why he missed a prior class. He explained the complexities of his household and described how the universe conspired to make it so he would have been late before he even got out the door. He decided it would be better not to come at all. I challenged his dedication to his karate. I described how I appreciate the frustration and embarrassment created by such times. "But," I said, "those events had already happened. You had already cost yourself several minutes of class. Even if you had shown up forty-five minutes late, you would have had fifteen minutes of training. Why throw them away?" I understand that most of my students are high achievers in the rest of their lives. Occasional delays are inevitable. When in doubt, show up anyway.

When you are late, it is appropriate to take care of all of your needs away from the dojo floor entrance. Take extra moments to make sure your gi is tied correctly, you've removed your jewelry, you've used the bathroom, and you've drunk plenty of water. There's nothing more flustering than hurrying out onto the floor, then having to excuse yourself again for something you hadn't thought of.

Then, take a few extra minutes (not just a few seconds) to warm up. Find an out-of-the-way corner, perhaps in the dressing room, to do some quick calisthenics and stretching of your hamstrings, quads, abs, back, chest, arms, and neck. Hurrying into a class just to get injured will crimp your training far more than tardiness.

Then, when you are ready, take a musubi dachi stance at the dojo floor entrance. You wait there for reasons of respect and safety; you should be humbly apologetic, anxious to learn, and reluctant to cause distraction to either the teacher or, worse, to a student needing to block at the same moment as your distraction! Keep your eyes focused on the instructor and wait for him or her to notice you. Chances are he already has. If more than a few moments go by, kneel in seiza. This is a visible indication of your willingness to wait and watch, for the rest of the class if necessary. When Sensei motions you forward, say nothing. Simply bow and run to your spot, always passing behind all other classmates, especially those senior to you in rank. This same strategy should be used if you're not participating in the class but need to cross the floor during a class for some reason; this is obviously a situation to avoid if you can, but necessary in some dojos to get to the dressing room.

The above is an excerpt from Welcome To Karate: Unlocking the Wisdom of the Beginner's Mind by Bruce Costa, Publication date YMAA Publication Center, September 1, 2021, ISBN 978-1-59439-841-4. 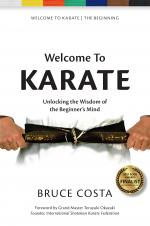