In this practice, a practitioner will use his mind, with some specific physical movements, to lead the Qì to the Láogōng (P-8, 勞宮) cavity and allow the Qì to be distributed to the entire hand. This practice has also been commonly used to improve the Qì circulation in the six Qì channels, circulating to the tip of the fingers.

Four Gates Breathing Qìgōng is a common practice in martial arts society. In this practice, a practitioner will normally first learn how to lead the Qì to the Láogōng (P-8) (勞宮) cavity at the center of palms. This is because the hands are used to strike, grab, and carry weapons. Through this practice, the sensitivity of the hands can be increased, and strength and endurance will be enhanced. Strong hands mean greater endurance and fighting capability in martial arts.

Next, practitioners will learn how to lead Qì to the Yǒngquán (K-1) (湧泉) cavity at bottom of the feet to improve the feeling of the soles. This will promote better balance and centering, thus helping to establish a firm root.

Only after practitioners are able to lead the Qì to the palms or feet efficiently and smoothly should they combine these two practices, which then becomes Four Gates Breathing. This will offer practitioners an upward and downward balanced feeling.

In this practice, a practitioner will use his mind, with some specific physical movements, to lead the Qì to the Láogōng (P-8, 勞宮) cavity and allow the Qì to be distributed to the entire hand. This practice has also been commonly used to improve the Qì circulation in the six Qì channels, circulating to the tip of the fingers. These six channels are the: Heart, Lungs, Pericardium, Small Intestine, Large Intestine, and Triple Burners. 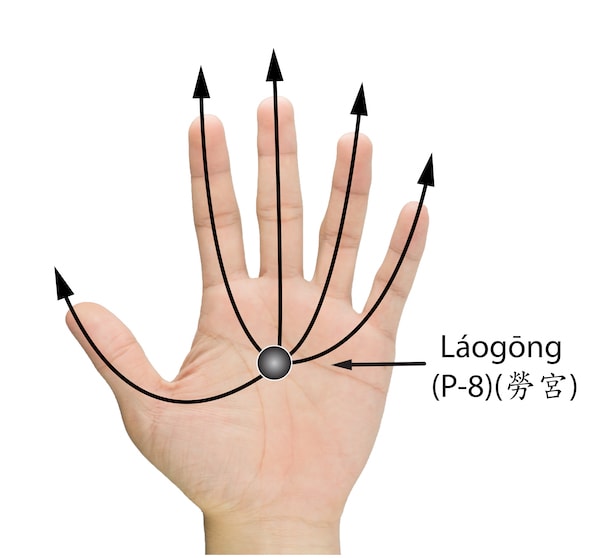 When you practice, you may sit or stand. Here, we use standing as an example. Stand comfortably with palms facing downward. First, inhale deeply and gather all the Qì at the Real Lower Dāntián. Use Reverse Abdominal Breathing and gently withdraw your abdomen and Huìyīn.

Next, exhale and imagine you are pushing your palm down against some object. While you are doing so, firmly but gently push out your abdomen and Huìyīn. You should not pay attention to the meridian; just allow the Qì to flow naturally and smoothly by itself. All you need is a strong and focused mind to lead the Qì using the image of pushing an object. Remember, it is your mind that leads the Qì. The more focused the mind, the stronger the Qì will be led. In this position, your arms are more relaxed and Qì will flow easily. Once you have mastered the skill, you should gradually raise your arms and finally push forward. Naturally, because your arms are raised, they will be more tensed and the Qì flow will be more difficult.

Next, inhale deeply again and lead the Qì back to the Real Lower Dāntián. Repeat the training for as long as you have the time and inclination. If you wish to keep leading the Qì out and extending your Qì beyond your palms farther and farther, when you have reached the end of exhalation, simply hold your breath for five to ten seconds. This will allow the continuous expansion of your Qì. Then when you inhale, simply relax your abdomen and Huìyīn and allow the breathing to return to its normal state. Naturally, the more repetition, the farther the Qì will reach.

Once you are able to lead the Qì to the Láogōng at the center of your palms easily and smoothly, you may practice extending the Qì to the tips of your five fingers. This will allow your Qì to circulate more abundantly in the six meridians in the arms for health. These six meridians are the Lungs, Pericardium, Heart, Large Intestine, Triple Burner, and Small Intestine. This practice is commonly called Finger Tip Qì Releasing Practice (Zhǐjiān Fàngqì Liànxí, 指尖放氣練習).

This dual cultivation practice is commonly called Láogōng Dual Cultivation (Láogōng Shuāngxiū, 勞宮雙修) or Láogōng Qì Exchange Practice (Láogōng Huanqì Liànxí, 勞宮 換氣練習). This dual cultivation is the most basic and safest Dual Cultivation training for beginners. It is also the most basic training for Qì masseurs and Qì healers. In this practice, you and your partner mutually exchange the Qì through the Láogōng cavity and lead it to different areas of your partner's body. For example, by using your mind in coordination with your breathing, you may first lead the Qì to the partner's wrist and your partner will do the same. After both of you can smoothly lead and govern the Qì through this exchange, you can then extend the exchange to areas further away from the wrist, to the elbows or shoulders. The final goal of this Qì exchange is to reach each other's Real Lower Dāntián. Naturally, the farther your Qì enters your partner's body, the more difficult it will be. 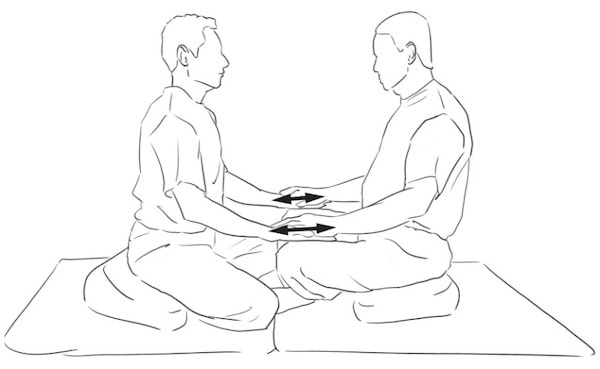 When you practice, you and your partner sit and face each other. The person who has more experience will be the leader while the other is the follower. The follower places their palms on their partner's knees with palms facing up. The leader will place their palm on the top of follower's palms facing down with Láogōng lined up with each other.

After you have mastered this Qì exchange, advance to the elbows, then the shoulders, and finally to each other's Real Lower Dāntián.

If you have practiced with palms touching, you may then enter into the more advanced practice of Dual Cultivation without touching. That means the leader will place his palms above the follower so their palms are a couple inches apart. After practicing until you can both strongly feel the Qi exchange, you may increase the distance between your palms.

Again, once you have learned Martial Grand Circulation in, you may then apply it to this practice and make the Qì exchange stronger.