Ready, Stress, Go! Why Active Shooter Training Fails | YMAA
Skip to main content
FREE Shipping Order Over $70. (US Only, Conditions apply)    |   Up to 20% Off. Exclusions apply. 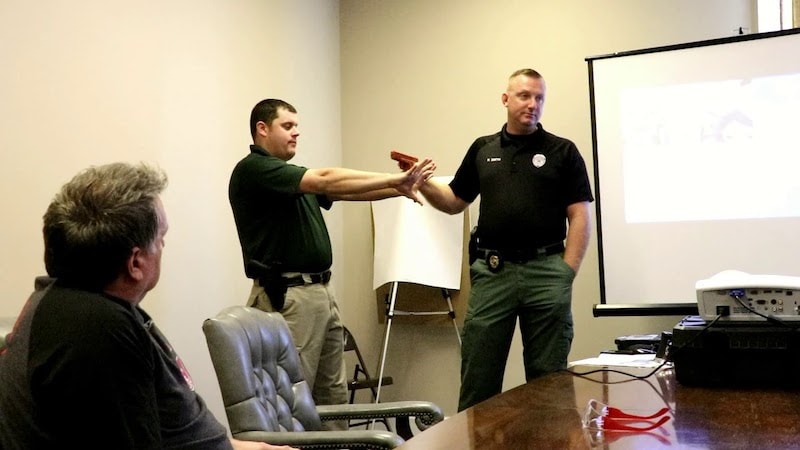 Training that leaves participants terrorized, anxious and bruised fails the foundational ideal that makes it meaningful.

The purpose of training is to inspire a sense of confidence and competence where knowledge and skill are otherwise wanting. Training has no practical value without that animating purpose. Training that leaves participants terrorized, anxious and bruised fails the foundational ideal that makes it meaningful.

Recent research, buttressed by a resurgent common sense, suggests that the graphic, dramatized, flashy Active Shooter training that has become a staple in educational settings leaves participants terrorized, anxious and bruised. It harms rather than helps. [1] This brief article explores why and proposes a shift in focus from mitigation to prevention.

The centerpiece of fashionable Active Shooter training is “reality based,” “scenario based” or “stress inoculation” training (for better or worse, the terms have come to be used interchangeably). Law enforcement did not forge the concept of stress inoculation or the edgy terminology of “reality-based” training that grew out of it. Law enforcement co-opted the concept from psychology without any real attribution and, perhaps, without understanding either. Originally, the concept was developed to treat a range of psychological conditions, especially phobias—and let us remember in the context of Rapid Mass Murder [2] events that interpersonal violence is virtually a universal human phobia. Distilled to essentials, the idea was to introduce a person to the environment (or element thereof) exciting the traumatic response in controlled, measured, rationally sequenced doses in a systematic effort to build tolerance against the trauma.

For psychologists, the focus was and is “inoculation.” For Law Enforcement trainers, the focus was and is “stress.” In practice, for law enforcement, the concept devolved into heaping stress onto trainees with little regard to anything else. Stress became an end in itself—and the more elaborate and wild the stress, the “cooler” and “more real” the training. “Ready, stress, go!” became the clarion call of the high-octane trainer. The problem with this approach is that it contradicts the premise of stress inoculation. Heaping stress on trainees does not magically prepare them. On the contrary, it deepens the tendency to inaction and pathology. Proper training can and should empower.

A good, active-minded trainer reminds himself regularly that stress is not an end in itself but rather a means to achieve efficacy in real world encounters. There is no evidence at all that potboiler scenarios teeming with juiced-up “bad guys” clad in imposing tac-gear [3], cutting edge weaponry and thundering grenades, bursting into classrooms like modern day Mongols, capping teachers in the backs of their heads and spraying fake blood around, peppering the mayhem with occasional witty quips, empowers trainees to act with any degree of efficacy in real world encounters.

On the contrary, as noted, all the evidence yields the conclusion that such theater merely dials up anxiety. And, as a matter of fact, there is nothing “real” about “reality-based” training. Cherry picking occasional factoids and enshrining them in mini dramas does not make a thing “real.” “Reality-based” is much like the “based on a true story” moniker designed to pique viewership on streaming platforms. The one thing that you can be certain of when you hear the boasting phrase “based on a true story” is that you won’t see a true story. Likewise, describing the graphic, stress-drenched, semi-improvised melodramas at the heart of most active shooter training as “reality based” is like describing beyond meat as “sirloin-based.” Melodramatic half “re-enactments” induce stress; participants experience stress. They do not, in themselves, help to manage stress. Thus, predictably, as the research confirms, the result is a deepened sense of anxiety and helplessness.

By contrast, lockdown drills, as fire drills and evacuation drills, can be very effective precisely because the drills focus on developing simple, fluid mechanics in prescribed contexts. The basic mechanics, reinforced by regular practice, support action against stressors that would otherwise overwhelm a mind asked, in effect, to improvise its way through the chaos. Just as with fire drills or evacuation drills, lockdown drills should be conducted with a focus on calm, deliberate action. And they work. Where employed, lockdowns have provably impeded killers from gaining access to victims. Training “scenarios” should do essentially the same thing. They should focus on developing mindset and mechanics in tightly scripted—not improvised—exercises designed to train, not test, such that action becomes “second nature” rather than frozen. Fire drills would never have worked if, while practicing the mechanics of calm, orderly evacuation, administrators ran about with flame throwers screaming “Fire! Fire! The fire is going to get you!” But Active Shooter training for civilians—including children—teems with that loony sort of drama.

In any event, is the focus on mitigation justified by the data? Mass murderers do not in fact emerge out of nowhere and nothing—good kids do not “snap” suddenly. They telegraph their troubled intentions, generally more than once and in more than one way. The courts knew of the killers at Columbine (and, importantly, Columbine was the template for all Rapid Mass Murder events that followed) long before the massacre because they had been arrested. And the courts recognized them as troubled. Part of their plea involved court-ordered counseling. Police, too, knew the killers. Indeed, police had prepared a warrant to search the room of Eric Harris based on, among other things, information that he had made terrorist threats. The warrant was never executed. Teachers knew of the killers. The killers had written and turned in school projects praising the killing apparatus of the Nazis. At least one teacher expressed concern about what the praise might mean but without substantive follow-up. Some parents knew of the killers’ aberrant behavior as well—and complained to police. [4] There were, in short, many inflection-points but no coordinated, integrated response to interrupt the path to violence.

Columbine was no one-off. Recent reports authored by the United States Secret Service confirm the pattern. [5] These killers engage in alarming behavior in 100% of the cases surveyed in school settings. This is an extraordinary statistic, not least because it screams opportunity: the opportunity to prevent these events before they happen. So why is the focal point of training on mitigation after violence commences? The priorities are precisely inverted. Prevention should be the primary, though not exclusive, focus of training and policy.

Interrupting the path to violence begins with defining a simple, accessible mechanism for reporting information on threats—a mechanism understood and trusted by staff and students. Information, once forwarded, must be assessed. As a practical matter, assembling a Threat Assessment Team to evaluate the nature, credibility and gravity of the information is the critical step in preventing violence. This is no simple task. Thinking about violence, confronting those who threaten it and devising protocols to keep it from happening is not for everyone—psychologically or logistically. Pro forma threat assessment that serves as a mere cosmetic appendage to satisfy appearances fails every time.

Gathering the right mix of personalities and talents takes time. Furthermore, it is crucially important that Threat Assessment Teams not cloister themselves within the educational setting, as so often happens. Coordination is crucial. Lack of coordination begs for missed opportunities, as Columbine (and many other incidents) illustrates. Effective Threat Assessment Teams establish liaison with counterparts in other agencies—with law enforcement, with district attorneys, with family courts, with departments of mental health and youth services. Many agencies with unique powers and mandates coordinating effort to address the same threat afford a range of possibilities unavailable to a single organization. The value of an integrated approach cannot be overestimated.

Horror-film style, blood-drenched, simunition-riddled, semi-improvised theater that masquerades as training, funded substantially by state and federal dollars, has provably failed. It has not reduced the number of “active shooter” incidents year over year. It has not diminished the number of deaths. It has not produced a civilian populace prepared to confront a killer. On the contrary, as argued, the evidence demonstrates that it has produced a civilian populace more anxiety-ridden than ever after the “training.” If training in school settings is to be mandated and supported by government funding, perhaps the dollars should at least be directed to protocols and practices that do not make the problem worse.

[2]. The term, more accurate than the neutral phrase, “Active Shooter,” was coined by Ron Borsch, Director of the Southeast Area Law Enforcement Academy.

The above is an original article by YMAA author Lieutenant Daniel Modell (ret) and co-author Sergeant Russell Jung (ret.). Lt. Daniel Modell is YMAA author of The Warrior’s Manifesto: Ideals for Those Who Protect and Defend, Publication Date February 2018, ISBN: 9781594395987

Sergeant Russell Jung (ret.) served for over twenty years in the New York City Police Department. Prior to his career in law enforcement, he served in the United States Army. He secured an advanced degree in Homeland Security Studies and is author of State Bureaucracy: Entropic Organization in the Age of 4th Generation Warfare.