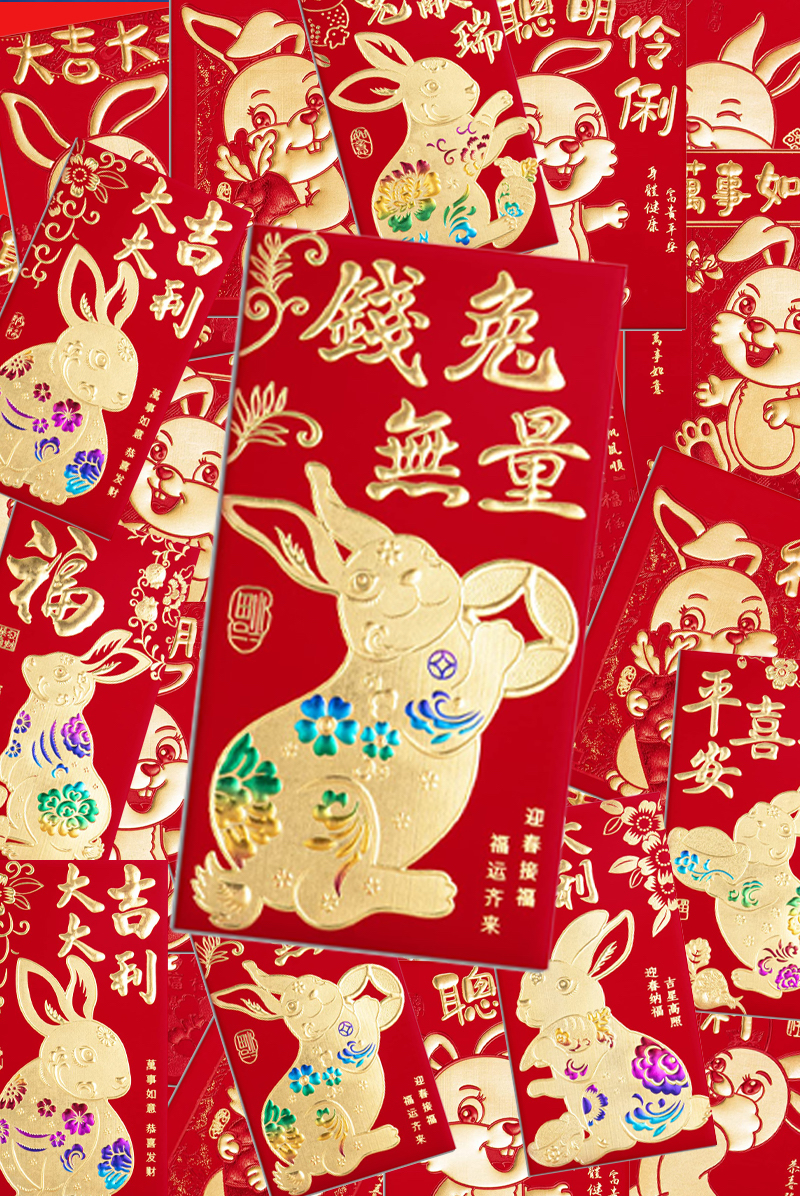 This year, 2023, marks the Year of the Rabbit in the Lunar calendar. In Chinese culture, the Rabbit is believed to be a symbol of hope and longevity. In celebration of the new year, YMAA Publication Center staff writer Gene Ching explores the meanings underlying the rabbit in Chinese thought as well as the tradition of the giving of red envelopes.

Long strings of firecrackers strands blast everywhere, filling the air with red paper shrapnel and the reek of gunpowder. I’m reaching for that precious red envelope under an unwieldy Chinese lion head amidst explosions and drumming – this is what Chinese New Year always triggers in me. Once a clump of firecrackers burst into my lion head, trapping me as they ricocheted around in that basket of bamboo framing and thick paper mache. I shut my eyes, covered my face with one arm and supported the lion head with the other and kept shaking the head in hopes to dodge the explosives. To break character in a lion dance brings dishonor to your master and I wasn’t about to do that. I just stayed focused on what it was all about – getting that red envelope...

Traditional Kung Fu practitioners undergo the time-honored ritual of lion dancing every year. It’s chaos, joyous chaos, meant to drive away evil spirits. Chinese New Year celebrations are filled with so many observances and customs beyond lion dancing: special treats like candied lotus roots and sticky rice balls to offer to ancestral altars, getting together with family for feasts and banquets, and passing around those red envelopes to bring luck. This year, those envelopes will be covered with cute little bunnies.

Sunday, January 22, 2023, marks the turn of the Lunar New Year from the Water Tiger to the Water Rabbit. There are twelve zodiac animal signs in the Lunar calendar; the Tiger and the Rabbit are third and fourth respectively. Laid on top of these dozen animals are the five elements – wood, fire, earth, metal, and water – in that order. Each element is repeated twice which is why last year was the Water Tiger and this year is the Water Rabbit. They will be followed by the Wood Dragon and then the Wood Snake (water begets wood in the elemental cycle of creation). Five times twelve equals sixty so the complete zodiac is known as the ‘Cycle of Sixty.’ The cycle begins with the Wood Rat, which makes year of the Water Rabbit the 40th year in the cycle of sixty (you can do the math yourself if you like). In the Chinese calendar, this is the year 4720, because this reckoning goes back to the Yellow Emperor, Huangdi.

Rabbits, Cats and the Moon

Although the roots of this annual animal zodiac originate from China, the Lunar New Year is celebrated throughout Asia, as well as all around the world through the Asian diaspora. However, in Vietnam and some Nepalese traditions, the Rabbit is replaced by the cat. This is the only swap – the rest of the zodiac creatures remain consistent. In China, there are several legends about why the Chinese zodiac does not include a cat. Most of these involve the rat tricking the cat somehow and getting it excluded (remember that the rat begins the cycle of sixty, a position that it attained through trickery.) As to why Vietnam replaced the rabbit with the cat, the leading theory is a phonetic translation mistake. The common word for rabbit in Chinese is tù (兔), but there’s another ancient term seldom used anymore, mǎo (卯). This sounds a lot like the Chinese word for cat – the onomatopoeia māo (猫).

The rabbit is a symbol of longevity. Akin to the deer and its long antlers, the long ears of the rabbit symbolize long life. The rabbit is also connected to the moon. When westerners look at the moon, they see the ‘man in the moon.’ However, Chinese see a rabbit – specifically the Jade Rabbit (Yùtù 玉兔). According to legend, the Jade Emperor sought an unselfish animal to help him prepare a magical elixir for the immortals. He disguised himself as a starving beggar and cried for help. Three animals responded: a monkey, a fox, and a rabbit. The monkey brought fruit, and the fox brought fish, but the rabbit brought nothing. Embarrassed, the rabbit jumped into a fire, offering its flesh to feed the beggar. The rabbit’s self-sacrifice won favor with the Jade Emperor, who transported the rabbit to the moon so evil humans could not steal the elixir. There, the rabbit mastered the skills to create the elixir of life. The Jade Emperor rewarded the rabbit for its achievement by transforming its fur into the color of lustrous white jade. Consequently, some forms of qigong evoke the Jade Rabbit within the names of the movements. This is also among the reasons why the rabbit is a symbol of hope.

Chinese New Year observations go for two weeks. This year, it begins with the Spring Festival on January 22nd which is observed after the New Moon on January 21st. It concludes with the Lantern Festival on February 5th celebrated on Full Moon on that same night. There is a wide variety of special festivities and observations for each day depending upon individual folk traditions, but there are some universal ones too. In China, everyone tries to go home for the holidays, making for the largest annual human migration on the planet. And everyone will be exchanging red envelopes to spread good luck.

Those red envelopes are an important part of Chinese culture that extends beyond New Year celebrations. In Mandarin, the envelopes are called hóng bāo (literally ‘red bundle’ 紅包), but in Cantonese they are called lai see (‘merit affair’ although this can be translated and written in several different ways 利事). Whenever a gift of money is given, it is presented in a hóng bāo.

On Chinese New Year, it is customary for seniors to give hóng bāo to juniors. Adults give them to children, married people to give them to singles, and bosses give them to employees. In Chinese communities, it’s common to see children gleefully bowing to their elders and wishing them ‘Happy New Year’ with the hope of getting a hóng bāo in return. The amount contained in a New Year hóng bāo can vary from a single coin or bill to something considerably more generous, like the lucky numbers of 88 or 888. However, it never contains a sum of 4 or 44 because four is unlucky. The word for ‘Four (sì 四)’ in Mandarin is a homophone with the word for ‘death (sǐ 死).’ Only the tones are different.

Hóng bāo are also given at weddings and discipleship ceremonies. They can be given as bonuses, as gifts of appreciation, and even as bribes. When a Kung Fu school performs a lion dance, the lion is symbolic of the master of the school. On a feng shui level, the lion is there to drive away evil spirits. On a practical level, it symbolizes that whoever is hosting the lion dance comes under the protection of the master too. This confused western law enforcement because it seemed like ‘protection’ money and in a way, it could be interpreted as such.

Lion dances are performed to bless moments like the new year, a new marriage, the opening of a new business, a gift to a newborn, any event that you don’t want tainted by evil spirits bringing bad luck. If you see a lion dance in a Chinese New Year parade, it’s good luck for you to offer a hóng bāo. Wave the envelope at the lion noticeably. Remember that it is difficult for the performer to see out of a lion (they may be dealing with firecrackers going off inside their head) so be as obvious as possible. The lion will come over and ‘eat’ the hóng bāo, and may even bless you with a little bow, a nod, or a wink.

If you give or receive hóng bāo, do so with both hands and a slight bow. Never look inside to see how much it is. Do that privately, or pass it on to someone else, as often is customary. Remember it’s not about making money. It’s about spreading the wealth and luck. Hopefully this year wealth and luck breed like rabbits. 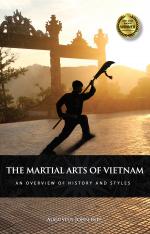 BOOK: The Martial Arts of Vietnam 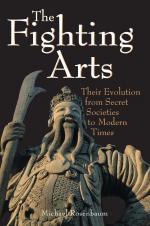 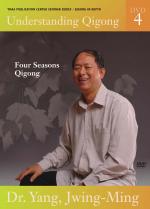