A Map: Knowing Where You Stand in The Dojo | YMAA
Skip to main content
FREE Shipping Order Over $70. (US Only, Conditions apply)    |   Up to 40% Off. Exclusions apply.

Home >> Articles >> A Map: Knowing Where You Stand in The Dojo 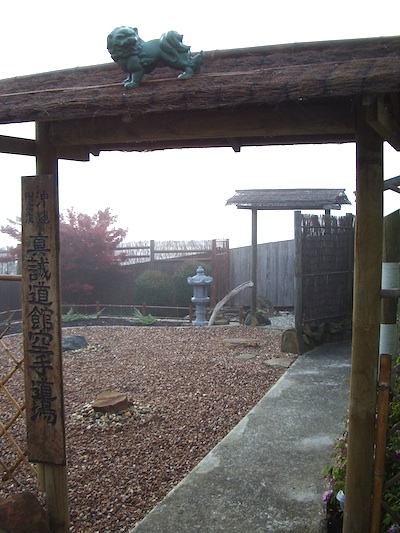 A Map: Knowing Where You Stand in The Dojo

The size of an Okinawan karate dojo is likely to be smaller than its counterpart in America or Europe. It is also more likely to be attached to or form a part of the sensei’s home. Space on the island is at a premium and few families can afford the luxury of leaving large sections of their home vacant and unused for most of the day.

I have visited dojo where boxes full of stock from the family’s shop, and even furniture, has had to be moved to one side first in order to allow enough space for training. I have to say that I never found this a problem; in fact, I always thought it added something to the experience of learning and somehow made the karate I was doing seem more natural and relevant to normal living. When a dojo is a place permanently set aside for karate or kobudo training, then in Okinawa it has a slightly different appearance from the dojo of Japan.

As I follow the Okinawan way of karate training, so my dojo stands as a part of my home. When I established it I did so with my training needs in mind, and this in turn dictated the look and feel of my dojo. Like traditional dojo in Okinawa, you have to be invited inside; you cannot just walk in off the street and solicit instruction. Once inside there are some unspoken rules and a few invisible boundaries. These are borders that you cross at your peril if you wish to remain in the dojo for longer than a single visit. What follows will give you enough information to find your way around a dojo without causing yourself unwanted problems due to a perceived lack of good manners.

In Okinawa the main wall, known as the wall of honor (shomen), will usually have some form of alcove (tokunoma) built into it in which are placed objects important to either the sensei or the type of karate or kobudo that is taught. It may also contain one or more hanging scrolls (kakemono). Along this wall, portraits of deceased teachers are placed high up, close to the ceiling, which is considered the most respectful position.

Unlike the dojo of Japan, only a few Okinawan dojo I have been in had a small Shinto shrine (kamiza) on the shomen. Contrasting with the rather austere look of a Japanese dojo, the walls in an Okinawan dojo are usually cluttered with either weapons or the tools used in hojo undo and kigu undo training. Jars, barbells, and a collection of different weights and training devices can give an Okinawan dojo a full look. Nevertheless, the dojo in Okinawa are every bit as special to Okinawans as the Zen-like dojo found in Japan are to the Japanese. The training methods employed in each location, too, are often as different as the dojo. Whereas Japanese karate teachers are inclined to drill students in ordered lines up and down the dojo, in military fashion, in Okinawa the training is far less militaristic, and students often spend their time working individually or in small groups.

Perhaps it is the nature of all societies to arrange their activities in ways that reflect that society’s underlying character. In a Japanese dojo, karate training has always been rather more formal than in Okinawa. Okinawan people live, by and large, in a very easy-going culture. Okinawan society, although hardworking, is built around a deep appreciation of its island home and tropical climate and bears only a passing resemblance to the big city lifestyle of Japanese salary men.

An American equivalent might be the difference between living in New York or Hawaii. Okinawans have a lifestyle that until recently saw an above-average number of them live well into their hundreds; and even with the relentless encroachment of modernity slowly eroding this statistic, island life is still lived at an unruffled pace seldom found on the Japanese mainland.

In contrast to the more relaxed way of life in Okinawa, Japanese society has always been complicated; it may look simple from the outside but this is only how things appear on the surface. Ask anyone who has tried to conduct business in Japan and he will tell you tales of utter despair. The Japanese way of doing things, anything at all, is set firmly within the framework of how they believe a particular thing should be done. They have a word for this; it’s called “kata.” From how to meet and greet someone for the first time to how to go about serving or being served in a coffee shop, everything has a right way and countless wrong ways. I want to look a little closer at the way the Japanese sense of conformity (kata) has shaped the place where karate is practiced: the dojo.

Kata in the Dojo

In Japan and in all dojo around the world where traditional Japanese martial arts are practiced, a similar blueprint, in accordance with the kata of a dojo, is used in the layout of the training facility. A large rectangular room or hall with sufficient space to accommodate several people training at the same time is divided into two halves, as well as four quarters. These demarcation lines are not obvious to the casual observer; that is to say, they are not visible. Rather, they divide the dojo in much the same way as the lines of latitude and longitude divide the globe. The entrance should be, ideally, located on the rear wall, the wall opposite the one being used as the shomen. Facing the shomen, senior students stand and train to the right-hand side, while the junior students use the left-hand side of the dojo. Each wall, and by extension the area closest to it, has a name; the wall and the area to the right of the shomen where the seniors train is called the upper seat (joseki), while the wall and area to the left is referred to as the lower seat (shimoseki).

The wall at the back of the dojo and the place considered most appropriate for the entrance to the dojo is called the lower wall (shimoza). On the shomen in a Japanese dojo there would be a small Shinto shrine known as a shinzen or kamiza, or failing that perhaps a hanging scroll (kakemono) bearing some image or writing appropriate to that dojo or the martial art practiced there. You can also expect to see portraits of former sensei or perhaps the school’s founder displayed on the shomen. If such portraits are present, they will inevitably appear in black frames as a symbol of respect to the dead. The side walls, joseki and shimoseki, are usually free of ornament, although this is often where you would find the weapons, if used, stored neatly in racks. The rear, or lower wall, the shimoza, is likely to have a number of items attached to it. These can include training aids, such as in the case of a karate dojo: makiwara, kick bags, and other equipment.

Immediately upon entering the dojo (in Japan or Okinawa), you enter an area known as the genkan. This is the place where shoes are removed before placing them neatly on a small shelf or tidily in rows along the floor. If shoes are in rows on the floor, time is taken to turn the shoes away from the shomen as a mark of politeness and also to facilitate an easy climb back into them at the end of training. You should not, however, remove your socks and leave them in your shoes; that would be a mistake. Instead, they should be taken into the changing room and kept out of sight with the rest of your clothing until needed again when the training is over.

A story I like from karate’s past concerns the late master, Gichin Funakoshi. It was said that even well into the twentieth century, he observed many of the age-old taboos still governing people’s behavior on Okinawa in the nineteenth century, and to this end, he would never use the words for certain everyday items. Things like toilet paper for example were unmentionable, and he would never speak openly about underclothes. Among these, socks were considered part of a person’s private apparel and should not only go unspoken but for the most part unseen too. In his Foreword to Funakoshi’s autobiography, Karate-do: My Way of Life, the president of the Japan Karate Do Shoto Kai, Genshin Hironishi, describes how Funakoshi’s grandson tried to trick the old karate master into breaking this taboo and relates the story like this:

To those of us who studied under him he was a great and revered master, but I fear that in the eyes of his young grandson Ichiro (now a colonel in the Air Self Defense Force) he was merely a very stubborn old man. I well recall an occasion when Funakoshi spied a pair of socks lying on the floor. With a gesture toward Ichiro, he said, “Put those away!”
“But I don’t understand,” said Ichiro with a look of utter innocence. “What do you mean by ‘those’?”
“Yes,” said Funakoshi, “those, those!”
“Those, those!” Ichiro retorted. “Don’t you know the word for ‘those’?”
“I said put those away immediately!” Funakoshi repeated, and Ichiro was forced to admit defeat. His little trap had failed. His grandfather still adamantly refused, as he had all his life, to utter the word for socks.

Today people do not adhere to such a rigid code of conduct; still, it is considered ill-mannered to leave your socks hanging out of your shoes in an untidy mess. If nothing else, it speaks to a person’s laziness and lack of consideration for others, character traits that you don’t want to put on display before you even step onto the dojo floor. There is also the question of odor and personal hygiene, neither of which should be taken lightly in the dojo.

Being attentive to not only your surroundings but to how you interact with others is extremely important in the learning of karate, and neglecting such things is guaranteed to bring some harsh lessons your way.