Home >> Articles >> A Photo Shoot for the Ages 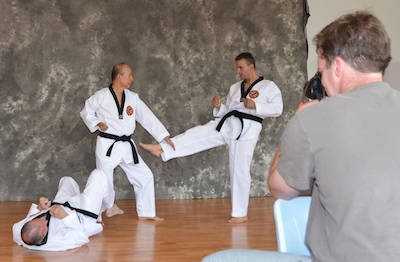 A Photo Shoot for the Ages

As digital publishing and electronic readers begin to eclipse the charm of the printed word, books of paper, binding, glue, and ink become all the more dear, particularly to those of us who still take great pleasure in holding the editorial contributions of an author in our hands while mindfully turning pages infused with academic thought, one at a time.

As digital publishing and electronic readers begin to eclipse the charm of the printed word, books of paper, binding, glue, and ink become all the more dear, particularly to those of us who still take great pleasure in holding the editorial contributions of an author in our hands while mindfully turning pages infused with academic thought, one at a time. And so it was with great satisfaction that I met my teacher, Grandmaster Richard Chun, in June of 2012 for an extensive one-day photo shoot that would yield vibrant illustrations for our soon-to-be-published book Taekwondo Black Belt Poomsae: Original Koryo & Koryo. The book will be offered by YMAA Publication Center with a release date of autumn 2013. The prime subject of the work as the title denotes, revolves around two Korean-based poomsae, or formal exercises, as they are generically known.

Taekwondo poomsae, of whatever pedigree, characterize the essence of the art and represent, possibly, the single most effective barometer for gauging proficiency and growth. Moreover, it comprises the manner in which the classical martial arts were transmitted from venerable master to worthy disciple across the ages and continue to act as a significant vehicle for promotion as well as a vital component of competition. Subsequently, Taekwondo Black Belt Poomsae: Original Koryo & Koryo will spotlight these two important aspects, coupled with the combat applications, history and philosophy of both formal exercises. The former in its little known original version created by the Korea Taekwondo Association during the late 1960s and the latter in its current iteration developed by Kukkiwon, along with the Taegeuk poomsae, in the 1970s.

My co-author, Grandmaster Richard Chun, casts a long shadow on the art of taekwondo. He is of the same era as his contemporaries Sung Duk Son, Sijak Henry Cho, Daeshik Kim and Jhoon Rhee. Representing an illustrious vanguard, all five emigrated from Korea during the 1960s with the express purpose of promoting what was then known in the West as Korean karate. Clearly, their sacrifice was not in vain with taekwondo evolving into the most popular martial art in the world today. Grandmaster Chun’s collaborative authorship of Taekwondo Black Belt Poomsae: Original Koryo & Koryo essentially sanctions the reintroduction of Original Koryo, while paying tribute to the significance of Koryo in modern taekwondo. With an estimated 90 million World Taekwondo Federation-stylists practicing this formal exercise globally, the current version of Koryo is, by far, the most performed black belt poomsae to date. With this in mind, Grandmaster Chun and I concurred that an in-depth analysis of both poomsae, along with their history and applications, was long overdue.

The Journey of Book Writing

The first step on the long journey that eventually led us to this day of formalized pictorial documentation, materialized one evening in 2008 as Grandmaster Chun, his lovely wife, Karen, and I, were sharing a festive holiday dinner at a Middle Eastern restaurant. It was then, at his wife’s urging that this recognized pioneer of traditional taekwondo in America eagerly consented to collaborate on a book that would highlight formal exercises. While this work would embody our first literary alliance, collectively, Grandmaster Chun and I have written ten books in all based on the philosophy, history, and skill surrounding traditional taekwondo.

Yet, books of authentic value don’t just happen; they are a direct result of painstaking work and deliberation, in most cases, over many years. As any professional author can attest to, the writing process largely consists of staring out a window for hours on end until a few precious words squeeze from the convolutions of the brain to the fingertips like toothpaste from a tube. And there are moments of supreme bliss when sentences tumble out from the mind quicker than the keys of the laptop can be struck mimicking the falls at Niagara. Suffice to say that, similar to sausage making, the creative process is often not beautiful, but luscious when consumed. Consequently, over the next 1,460-plus days, Grandmaster Chun and I churned out copious amounts of information that eventually took on a life all its own as writing frequently does. All that was left were the photographs necessary to amplify the text.

In deference to Grandmaster Chun, YMAA publisher, David Ripianzi, a leader in Asian martial arts publishing, together with professional photographer Tim Comrie, rented a spacious photography studio in Fort Lee, New Jersey close to my home. This thoughtful gesture precluded the grandmaster, fellow Master Fred Kouefati, who was assisting with technique, and me from having to travel to Boston for the shoot. After setting up a complex array of equipment, Comrie, whose artistry contributed greatly to my second book, was ready to proceed.

During the shoot, I could not help but recall the very first time I was exposed to the teachings of Grandmaster Richard Chun. It was decades ago as a yellow belt when I was provided with a copy of Advancing in Tae Kwon Do, then published by HarperCollins and reissued in 2006 by YMAA in a large format paperback edition, that I was awe-struck by the philosophical underpinnings and explanations of the enclosed poomsae. Instantly I knew that I would someday seek out the legendary martial artist who had written this extraordinary book with hopes of becoming his humble student.

As we performed the various postures of the Koryo set, I thought back over that rich period of my taekwondo training, evoking a sense of accomplishment and wonder at the task we were undertaking. And so with each click of the Nikon and pop of the flash, rare technique was being pictorially preserved for martial artists currently practicing and for those still to come.

Since several hundred photographs needed to be captured within a relatively short span of time, we quickly settled into a routine of pose, shoot, and review. Individual images were either accepted or deleted and then we efficiently advanced to the next. Following this procedure, we accumulated almost three hundred usable stills in approximately seven hours, which was no easy feat. As the day progressed, we did not tire. The spirit of taekwondo filled the three of us—Grandmaster Chun, Master Kouefati and myself—with joy and enthusiasm.

After photographing the individual stances, kicks and strikes unique to Original Koryo and Koryo poomsae, we purposefully continued with a performance of each form, movement by movement, flawlessly executed by Grandmaster Chun. The kinetics majestically exhibited by the grandmaster, coupled with his pronounced projection of ki, will quickly become apparent to anyone taking advantage of this book in the not-too-distant future. His performance left little doubt that, over the decades since the initial publication of his landmark books Tae Kwon Do: The Korean Martial Art and Advancing in Tae Kwon Do, in which Koryo was first depicted, Grandmaster Chun’s technique has matured even further to the point of martial perfection leaving Master Kouefati and I with inspiration renewed.

The day drew to its inevitable conclusion with Master Kouefati and me trading several combat applications implicit in Original Koryo and Koryo with Grandmaster Chun. Since the definition of poomsae can be defined as a series of choreographed techniques aimed at defeating multiple attackers coming from different directions, we recognized early on how vitally important this section would be in adding a distinctive quality to the book. Seldom are these strategies addressed in detail, yet, must be recognized in order to gain a better understanding and appreciation of poomsae in general. Naturally, various practitioners can interpret the discrete sequences of defensive/offensive tactics embedded within each poomsae differently. Those photos chosen for illustration by Grandmaster Chun definitively prove the efficacy of traditional taekwondo on the field of battle as intended by its founders.

I would be remiss in not citing the assistance given our triumvirate during the shoot by my wife and partner, Patty Cook. From carrying Comrie’s photographic equipment up two flights of stairs to trimming our uniforms prior to a shot, her dedication to the success of our mission is without parallel. Similarly, over the course of the next few months as the editorial process continues, the literary magic of our YMAA editor, Susan Bullowa, will invariably act as a beacon in a forest of subjective prose.

Without question, it is our sincere desire that the descriptive photographs, accompanied by the comprehensive text contained in Taekwondo Black Belt Poomsae: Original Koryo & Koryo, will symbolize a decisive leap in the great chain of martial arts knowledge. Retaining its popularity as a competitive entity, Koryo can be reexamined through the lens of history and for its combat integrity. Likewise, with a possible reintroduction of Original Koryo as an heirloom form, using this book as a blueprint, taekwondoists will have yet another resource with which to vigorously practice Korea’s traditional martial art of self-defense. 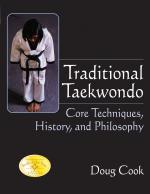 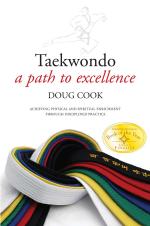 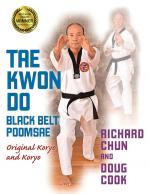 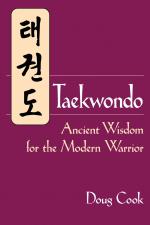