A Plethora of Weapons for Self-Defense | YMAA
Skip to main content
FREE Shipping Order Over $70. (US Only, Conditions apply)    |   Up to 20% Off. Exclusions apply.

Home >> Articles >> A Plethora of Weapons for Self-Defense 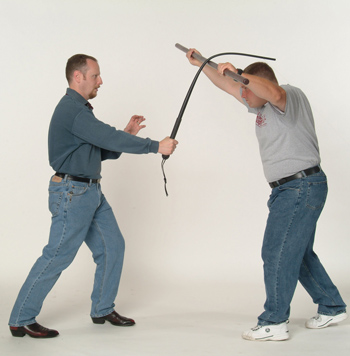 A Plethora of Weapons for Self-Defense

There are a plethora of deadly objects out there that you may encounter on the street. Knowing how they work can give you a leg up on protecting yourself from harm. Major categories include hand weapons, knives, swords, mass weapons, pole arms, multi-element weapons, projectiles, and unusual weapons.

“There is an old saying: ‘Leave one’s yard and find seven enemies.’ No matter how skilled one is in the martial arts, he will find himself unprepared if encountered off-guard. Ideally, then, one should constantly be in a state of preparedness.”

There are a plethora of deadly objects out there that you may encounter on the street. Knowing how they work can give you a leg up on protecting yourself from harm. Major categories include hand weapons, knives, swords, mass weapons, pole arms, multi-element weapons, projectiles, and unusual weapons.

Hand weapons add impetus to things that most people already know how to do, punching, blocking, grabbing, and so on. They are most effective in grappling, close, and short range where you would normally utilize empty-hand combat techniques. Hand weapons fall into two major subcategories: strike enhancers and control devices. The former make your blows more powerful while the latter help you apply grappling applications such as locks, chokes or pressure point manipulations more effectively.

Knives are popular weapons, easy to obtain and silent to operate. They are readily concealable, highly reliable, and do not take much special training to use to hurt somebody, especially in grappling, close, and short ranges. At the simplest level there are two kinds of attacks with a knife: cuts and thrusts. Cuts generally produce more bleeding while thrusts can cause more serious damage. The most effective knife attacks use the element of surprise to ambush a victim.

Swords are long-bladed weapons that can be used effectively for offensive or defensive techniques, especially in short- to mid-range combat. There is nothing scarier to most people than three feet of razor sharp steel in the hands of someone who knows how to use it effectively. Even a cheap sword can cause massive damage if used properly. Unlike a knife where targeting can be important, nearly any powerful blow from a full-sized sword can prove severely disabling or even fatal.

A major advantage that swords have over knives and other short weapons is their ability to kill from a distance. With good footwork and a modicum of training a person with a sword can easily defeat a knife-wielder without ever stepping into his/her opponent’s target zone. Most any type of sword can be used for thrusting, slashing, or combination attacks.

Mass weapons are simply heavy objects that can be used to hit someone, typically from short to mid range. They can be found just about anywhere, in the trunk of your car (tire iron, jack, or fire extinguisher), lying by the side of the road (e.g., board, stick, or rock), at the table where you eat (e.g., bottle, mug, or plate), or even at your desk (e.g., hole punch, stapler, or phone). They may be easiest to understand when broken into three subcategories: blunt instruments, extrusion weapons, and specialty weapons.

Blunt instruments are simply heavy objects such as pipes or baseball bats. Extrusion weapons have an extruding head such as an ax or pick that extends beyond the shaft. They are especially dangerous because even if you block the shaft the business end can still hit you. Specialty weapons require special skills to use optimally, primarily martial arts devices such as tonfa or sai. Certain types of mass weapons such as tactical batons are designed for carry-ability and conceal-ability and are legal in many jurisdictions.

Pole arms are long shafts you can use to strike someone, particularly at longer ranges. Clearly not something you would carry concealed or have available at every location, pole arms such as walking staffs, hockey sticks, or pool cues are available in certain environments. They have a significant range advantage over most concealable devices save for projectile weapons.

Because they are used a bit differently, I find it useful to break pole arms into three categories: long weapons, pointed long weapons, and bladed long weapons. The primary difference is that the latter two have a potentially deadly implement mounted on one end that can cause more damage than the shaft alone. The weight and balance of the weapon is also affected by whatever is mounted on the top.

Multi-Element Weapons Use Momentum to Cause Damage

Multi-element weapons include pliable devices such as whips or chains as well as composite items such as nunchaku or sansetsu kon bo (three-sectional staff). They use momentum to cause damage to an opponent and can be effective offensive weapons in skilled hands.

Multi-element weapons have good range characteristics and can be very challenging to block yet must be moving in order to cause damage hence may become difficult to control after an initial strike. In unskilled hands, they can become as much a danger to the wielder as they do to the opponent. Depending upon which weapon you choose they can be effectively used in short to mid or even long range.

Projectile Weapons Can Be Sent through the Air

Projectile weapons include anything sent through the air with force, including hot coffee, rocks, balls, bottles, arrows, darts, certain spears, and bullets. Depending upon the type of projectile employed, these weapons can be effectively used anywhere in close to extreme range. Major subcategories include liquids, thrown objects, bows, and firearms. Chemical sprays, fire extinguishers, and other liquids can be used offensively or defensively as well. Certain liquids such as chemical irritants are even designed specifically for self-defense purposes, distracting or disabling an assailant by affecting the eyes and mucous membranes.

Modern firearms can generally be classified as handguns, rifles, or shotguns. Most handguns are readily concealable and maneuverable, hence practical for self-defense, especially on the street. Rifles are primarily used for military, sporting, and hunting purposes, too unwieldy for many self-defense applications since a majority of gunfights take place at fairly close range. Shotguns as well as handguns are popular for home defense.

Almost anything can be used as a weapon, including bodily fluids, animals, vehicles, and explosives. Blood-borne pathogens such as HIV/AIDS, Hepatitis C, and TB can be used as weapons through syringes, rape scenarios, spittle, or open wounds. In some areas you are more likely to be attacked by a dog than you are to be attacked by a person. These attacks can be just as dangerous as any other type of weapon.

Quick thinking and use of impromptu counter-weapons can save your life from an animal attack just as it can from people. Vehicles can cause significant damage to a human being, especially when moving with any significant speed. Be cautious about pursuing a person in a vehicle if you are on foot.

Be Aware of Your Environment

No matter how well trained a martial artist you are; you simply cannot fight a bomb (or a bullet) with your hands or feet and expect to survive unscathed. The best defense is awareness of your environment as well as awareness of timing. Awareness of environment includes listening to your intuition and being aware of what is going on around you. Awareness of timing has to do with the time of day during which attacks are most likely to occur. When environment and timing converge, your level of alertness should be at its highest.