A Police Officer’s View of Scaling Force | YMAA
Skip to main content
FREE Shipping Order Over $70. (US Only, Conditions apply)    |   Up to 40% Off. Exclusions apply. 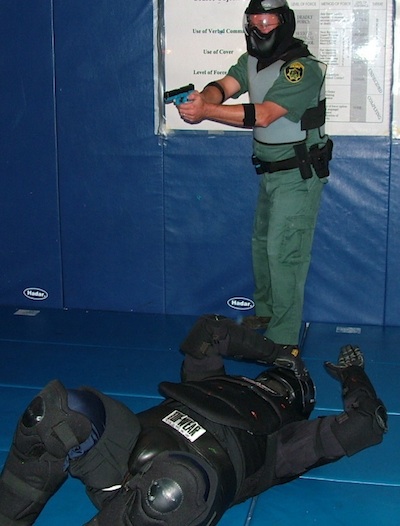 Fights are dynamic and chaotic situations. A simple escort hold, walking a drunk off the premises can turn into a knife fight or a struggle for your weapon in an instant. Or you and several other officers could be fighting against a large, vicious threat who is acting completely inhuman and have him suddenly go limp.

Fights are dynamic and chaotic situations. A simple escort hold, walking a drunk off the premises can turn into a knife fight or a struggle for your weapon in an instant. Or you and several other officers could be fighting against a large, vicious threat who is acting completely inhuman and have him suddenly go limp.

Changing conditions require changes in the force that you apply. So might changing assessment of the conditions: If the situation is going well, you might be able to use less force; if you are losing, you need more.

There are factors that affect these situations and basic principles to keep in mind.

First and foremost, force is used to accomplish a goal, to gain control. It is used either to make a threat do something or to stop a threat from doing something. It is not used for payback or to prove dominance. Force is never used to inflict punishment.

There are two reasons for this, one based on theory and the classroom, the other based on experience.

First, the officer learns the law and policy on force. Force within that policy is legal and appropriate. Cross those lines and you are committing assault, possibly manslaughter or even murder. As an officer you are paid, trained, and sworn to be one of the good guys. Always. No matter how bad a day you have had or how putrid a piece of human predator you are dealing with, cross that line, use the wrong force or use force for the wrong reason, and you are the criminal.

Second, and this is not theory, but some officers never realize this: Criminals have a specific worldview. Those with power, take. If you can get over, you get over. The world is divided into weak and strong, victims and predators. Career criminals believe the world works this way and that everyone knows it—the “good’ citizens are only too stupid or too afraid to act on it. Whenever an officer crosses that line, it merely confirms the criminal’s beliefs and they take it as proof that society itself and the protectors of society are pure hypocrisy.

“Punishment” is the strange idea that you can make a bad person into a better person through pain. You can’t. You only accomplish two things. You convince them that they were right, all along, and you guarantee that they will hurt someone else. After whatever beating you administer, they will feel a need to get their manhood back and will choose a victim, often their wife or child, to hurt. Experienced officers know this. Rookies need to know it, too.

This is the official word: Deliberate misuse of force will be investigated and disciplined internally, criminally, or both.

Generally, there are two ways that an officer gets in trouble in a force situation.

Excessive force is using force from a higher level on the force continuum than can be justified.

The second, unnecessary force, is more common in my experience. When the officer uses force in a situation where a reasonable officer would not, the force may be found unnecessary. If the officer actually provides Means or Opportunity (e.g. “You want to fight me? Okay, I’ll take your cuffs off.”), then unnecessary force is very clear.

Before escalating force, sometimes before even engaging in it, the officer must ask himself if it is worth the risk of injury (to self, threat, and bystanders) to even engage.

It’s hard to explain how profound an effect this decision had on our culture and the law enforcement community. In less than three decades as of this writing, but even in six years’ time, when I started my career in 1991, the impact of the decision was simply obvious—you don’t shoot people who don’t present an immediate threat.

The thing was, the Garner decision was a landmark. Up until then, and going back to English Common Law (before our Constitution, before the Magna Carta), running from an agent of the law was reason in and of itself to justify deadly force. If someone were to be taken into custody, he or she would go into custody even if it meant using lethal force to enforce a littering statute.

In the movie, “It’s a Wonderful Life,” Jimmy Stewart, drunk, wrecks his car. When an officer confronts him, Stewart runs away and the officer fires on him. When the movie was made, that was simply the way things were. There is nothing in the movie about the morality of that issue; it wasn’t questioned. It seems surreal from our modern point of view.

So even beyond whether the threat’s demeanor and actions justify a certain level of force, the officer has to look at the big picture and decide if the goal—what he wants the threat to do or to quit doing—is worth the risk. There’s a barking dog call and the dog is vicious … shoot the dog? shoot the owner? What level of force would you not be embarrassed to read about in the papers the next morning?

What’s Necessary Use of Force?

That said, you can never let the fear of injury stop you from engaging in a lawful and necessary Use of Force. There is no perfectly safe way to apply force to another human being. The safest pressure point can cause the threat to flinch and hit his head on a wall. People, including officers, slip and fall. The only 100 percent safe way to do the job is not to do it at all—but that’s not why you are paid. After hours of training or pages of reading all the ways that force can be viewed as excessive or all the ways it can go wrong, or reading all the scary court cases, some officers become afraid to engage. That puts them at risk and their partners at risk and the citizens at risk. Do the job.

Control. As your control increases, force should decrease. It should take less force to control a handcuffed threat than it did to get the cuffs on in the first place. When control is achieved, when you have denied the threat the means and/or opportunity to be a threat, the Use of Force is over. Anything done after control is achieved is unnecessary, and probably assault.

Noncompliance. You can usually justify an escalation in force through the simple fact that the force you are using is not working. This is more obvious at the higher end of the force continuum. If you are engaged in a fight with a threat in an altered mental state who is trying to hurt you and focused blows are not working, you may have no choice but to resort to deadly force. If you are trying to force a threat to the ground for handcuffing, and he is not responding to any pain-compliance or unbalancing technique that may, in and of itself, justify a focused blow.

There are some caveats, however. You cannot justify an increase in force for not following instructions if the threat had no chance to follow them.

The threat was mostly controlled but struggling as officers pushed him into the corner of an elevator. One officer, arriving late on the scene began to order the threat to, “Get down!” The poor guy couldn’t. He was jammed in the corner and could barely move.

That officer could not have justifiably escalated force based on the failure to comply.

If you are going to escalate force, be sure that it is still reasonable. It is easy to get caught up in the action and escalate to win, getting your ego involved.

Be prepared. Nothing works 100 percent of the time, not even a bullet to the head. At all times, be prepared to change what you are doing if it doesn’t work.

The key to a long career in dealing with violent bad guys is simple: Make good decisions, execute those decisions properly, and document it well. A good report is your friend. The report should include not only what the threat did and what you did, but why you did what you did, and how you made your decisions. Don’t be afraid to write about your feelings if they influenced your decisions.

Remember no matter what the media and the citizens sometimes seem to demand, you are human, too. You will experience fights and you will be scared and angry, and, sometimes weirdly elated. That’s all normal.