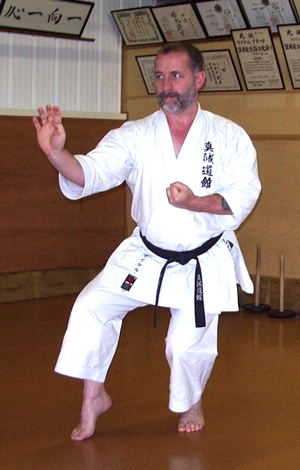 In an Okinawan karate dojo, warming-up exercises are known as junbi undo, preparation exercises. Within many Western schools of karate today, the warm-up exercises often have little in common with the mental activity that follows, neither do they always relate particularly well to the physical demands placed upon the specific muscle groups and tendons throughout the body that are about to be used in the karate training itself.

While it is not my intention to deny the importance of warming up before karate training of any sort begins in earnest, it has to be said that the activities engaged in under this banner can often fall short when it comes to the question of preparing the body and mind for the demands of karate. While aerobic fitness and muscular strength are no doubt important, the strong body and calm mind required in traditional karate is based on the understanding of your body weight and how, through the connection with the ground and a calm and focused mind, that body weight can be best used to deal with and manipulate the force of an attack. While all hell may be going on around us, we strive to remain calm inside. In karate, we try to be the eye of the storm.

Within the Goju ryu tradition of Okinawan karate, a series of exercises have been handed down since the days of Chojun Miyagi, the tradition’s founder. These exercises are intended to not only warm up the body, making it ready for training, but also to engage the particular muscles and tendons used in the various techniques of karate. They also play an additional role of focusing the mind on a particular part of the body as the routine is worked through, thus giving an early appreciation for some of the postures and “feelings” you are searching for in your karate technique. Because almost all of the techniques of Goju ryu karate are shared to some extent by other schools of martial arts, this set of junbi undo exercises should not be considered as being solely beneficial to Goju ryu practitioners alone.

In the main, there are two kinds of junbi undo exercises. The first stretches the muscles and tendons and loosens up the joints, which helps to promote suppleness and increase the range of motion in the moving parts of the body. This group begins to stir the blood and raise the body’s temperature. The second group of exercises is done to build strength and stamina in the major muscle groups of the body and to increase your mental powers of endurance. Over time, these two forms of junbi undo combined enables the techniques of karate to be performed well within the range of the karateka’s mental strength and physical suppleness. This in turn allows him to move freely and without the stresses imposed on a less supple or healthy body. The mind as well, familiar with the limits of the body, is calm and more able to achieve that relaxed state of concentration needed to deal successfully with conflict.

Beginning with the toes and working vertically up through the body to the neck, the first set of exercises is an excellent way to prepare both physically and mentally for the rigors of the training to come and to point your attention directly toward specific postures and positions encountered later in the actions of karate. These exercises, or something like them, should be considered as much a part of your karate training as a block, a punch, or a kick. What follows are the drills I teach and are practiced in my dojo before every training session.

Even when the entire training is given over to hojo undo, these exercises are still done because students should never attempt to lift heavy weights from scratch without preparing their body and mind in some way first. To do so is to invite the possibility of torn muscles, tendons, or perhaps even something worse. The fibers of the muscles work better when prepared; so remember, you shock them into activity at your peril. All these exercises should be considered general warming up drills, albeit specific to karate.

To improve your flexibility and muscular strength to their full potential, you should seek expert guidance from a qualified teacher of yoga, gymnastics, or weight lifting.

Junbi-Undo 1—Begin by standing in heiko dachi (natural stance, Figure A), resting the hands on the hips, and focusing your attention on the soles of the feet (teisoku). Spread the toes as widely as possible and try to make as much surface contact with the ground as you can.

From here lift up your big toe (Figure B) and hold for a second before returning it to the ground, gripping the floor, and lifting the smaller toes (Figure C) off the ground. This exchange is repeated at least ten times. The big toe up position is the same posture made with the foot when kicking yoko geri (side kick). With the big toe down and the small toes up, this foot position is used in kata when turning front on from a sideward stance, as in the gekisai kata, i.e., when moving from heiko dachi to sanchin dachi after the jodan shuto uchi (head height open-hand strike). It is also found toward the end of the kata saifa when moving on from the second chudan ura zuki into sanchin dachi, to throw hidari jodan gyaku zuki (left side head-height punch).

Standing in heiko dachi (Figure A) and placing your weight on one leg, raise the opposite heel and grip the floor with the toes with as much strength as possible. Twist the heel inward toward the standing leg (Figure D), but do not allow the toes to lose their grip; hold for four or five seconds before releasing the tension. This twisting exercise should be repeated at least ten times with each foot. Over time, this drill increases the strength of the toes and improves their overall dexterity. This is important in karate, as often within kata subtle control tactics using the toes are employed. One example occurs immediately after the kicks in the gekisai kata, and in the Goju ryu kata suparinpei where they precede the awase zuki (double punch) is yet another. In these and other kata, the toes are placed on the opponent’s foot to keep him from retreating and to hold him there for the strike that follows. During this time, the big toe is used to apply pressure on a vital spot just above the opponent’s toes (kori).

Placing your body weight on one leg, roll the toes of the opposite foot back and forth on the floor before making a circular motion (Figure E). Allow some weight to be brought to bear on the toes being rolled and take care to roll the big toe. This exercise increases your awareness of the toes and improves the overall dexterity of the big toe, a weapon so often left out of the karate arsenal, and yet, one that can have a mind-numbing effect when applied correctly as described in the previous exercise. Our big toe also provides us with the ability to balance properly and our understanding of its relationship with the ground is vital for our stability.

With the hands resting on the hips, raise the body up onto the balls of the feet (koshi) and hold for two or three seconds (Figure F). This posture works the tendon at the back of the ankle (Achilles tendon), stretches the calf muscles, and aids in the acquisition of good balance.

Placing the feet back on the floor (Figure G), rock backward on the heels (Figure H) before returning to the original position on the balls of the feet. Warming up the tendons and calf muscles of the leg, the first posture on the balls of the feet is also the foot position found in a karate front kick (mae geri). When on the heels, this foot position is found in the Goju ryu kata seisan, toward the end when kicking with the heel into the lower torso or bladder of an opponent (kakato geri). In the Shotokan kata unsu, this kind of kick is also used to great effect about two-thirds of the way through the kata,6 although in that particular school of karate the technique is also known as kesage geri.

Junbi-Undo 2—Keeping the armpits closed tightly, hold the arms out in front of the body with the palms of the hands open and firm. Springing off the floor with the ankles, shoot the knees, alternately, into the open hands in a steady and rhythmical way making as much impact with the palm of the hand as possible. This movement not only prepares the legs for action later in the karate training proper, but also helps spotlight the actual mechanics involved in the execution of a kick with the knee (heiza geri).

Junbi-Undo 3—Returning the hands to the hips, stand on the left leg and raise the right knee so that the thigh is level; doing this helps develop balance. Rotate the ankle, first clockwise and then counterclockwise. Then flick the bottom part of the leg out as if kicking. Keep the leg relaxed while you do this and remember to form the foot properly as if doing a karate front kick (mae geri). Repeat this by standing on the right leg and raising the left knee.