Ancient Chinese Weapons | YMAA
Skip to main content
FREE Shipping Order Over $70. (US Only, Conditions apply)    |   Up to 40% Off. Exclusions apply. 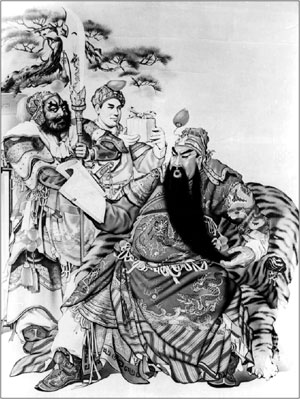 A country as vast as China encompasses many types of terrain. Whereas deserts and high plateaus cover the northern territory, mountain ranges dominate the west. The southeast coast and central zones, favored by the Chinese for thousands of years, are lush and warm with many lakes, ponds and rivers.

These geographic distinctions produced significant differences in the evolution of local cultures. Physical traits as well as ethnic traditions varied from area to area. Such differences caused variations in the weapons that developed. For example, Northern Chinese tend to be taller and more powerful than their southern brethren. Martial artists from the north utilized longer and heavier weapons. On the contrary, Southern Chinese, being shorter and generally weaker, would adopt shorter and lighter weapons appropriate for their stature. As an example, the long rod normally carried by southern martial artists was at least half a foot shorter than that of its northern counterpart.

Cultural backgrounds and the resulting lifestyles in different areas contributed to variations in weaponry. Northern China, because of the wide expanse of countryside, developed a culture very similar to that of Texas and the old west in North America. These people were wilder and much better at fighting on horseback than those from the south. Southern Chinese martial artists were more of a cosmopolitan type, who lived in a more crowded environment and grew to become better at ground fighting. Also, because of the warmer weather and wide spread bodies of water in the south, southern people were generally better at swimming and fighting in the water than northern inhabitants.

Distinctions existed also between people of the west and southeast. Because of the mountains in the west, the local people specialized in hunting with a trident. Naturally, they often used the same weapon when fighting. Also, poisonous animals such as snakes, spiders, and centipedes were common in the western mountains. After thousands of years of experience, people learned how to deal with these poisons. This special knowledge made western martial artists expert in utilizing poison on their weapons to kill an enemy more easily. The southeast, unlike the west, was a great agricultural plain. People used the hoe and harrow for cultivation. As a result, hoe and harrow fighting techniques developed.

Furthermore, the country was so vast that in ancient times the central government exerted little control in the areas distant from the capital. During harvest season, large groups of bandits would swoop down and rob entire villages. To combat such attacks, a village would hire a martial artist to teach the young people defense. Because the bandits struck with little warning, the defenders used whatever was at hand as a weapon. Therefore, the people became adept with the hoe, rake, harrow, trident, or other common farming or hunting tools as weapons of defense.

With time, communication and transportation improved throughout China. As weapons spread around the country, local distinctions were lost and martial styles and techniques became a national mixture.

Generally speaking, a well-trained martial artist would carry at least three kinds of weapons. He would have a primary weapon such as a sword, saber, staff, or spear, with which he was most proficient. Usually this weapon was obvious to his enemy and had the most power and killing potential. A secondary weapon would be hidden on his body, perhaps a whip or an iron chain in his belt or a pair of daggers in his boots, which could be used in the event that his main weapon was lost during battle. For use at very long distances or in a surprise attack in a close battle, he would use dart weapons. Some of these easily-hidden weapons (e.g., darts or throwing knives) were thrown by hand, others (e.g., needles) were spat from the mouth, and still others (e.g., sleeve arrows) were projected from a spring-equipped tube.


In choosing his weapons, a martial artist must consider three factors. First, what weapon suits his physical stature? If he is tall and strong, he would take advantage of a long, heavy weapon such as a large saber or halberd, which may weigh over 50 pounds. These weapons have more killing potential because of their length and are more difficult to block because of their great weight.

If a martial artist is tall but not particularly strong, he might choose a spear. With this long but lighter weapon, he can effectively utilize his speed and realize greater endurance in battle. A short but very strong man might select a thick, heavy saber or a pair of hammers. Such weapons can devastate an opponent at close range.

The second factor a martial artist must consider when choosing a weapon is the conditions of an upcoming battle. Will he be on horseback facing a similarly mounted opponent? Will he be grounded but his enemy on horseback? Or, will it be a purely man-against-man encounter with no interfering steeds? Each situation requires a different weapon.

Choosing A Weapon For Combat

If fighting horse-to-horse, a martial artist must consider four things: protecting himself, protecting his horse, attacking his enemy, and attacking his enemy’s horse. The reason for protecting himself is obvious. Protecting his horse is almost as important. He remains on equal footing with his adversary only while he is mounted. If the horse becomes disabled or the enemy knocks him off the horse, he is lost. Of course, attacking the enemy is uppermost in his mind. A long weapon such as a long staff, spear, or halberd fulfills all these requirements.

A martial artist on foot, fighting a mounted opponent, requires different weapons. His objective, killing the enemy, can be accomplished more easily if he can force him off the horse. In accomplishing that goal, a hooked sword can be used most effectively in attacking the horse’s legs. Alternatively, he may use a very long, tapered rod to knock his adversary to the ground.

The final factor a martial artist considers when choosing a weapon is his own martial style. Certain weapons lend themselves better to one school than to another. For instance, Shaolin disciples were apt to use a long rod or spear, whereas Taiji practitioners more often chose the sword.

Religion too, played a role in the development of weapons in China. Monks invented weapons that had little killing potential but were still effective for self-defense, or even as tools. Their weapons often served to clear away brush as they traveled the countryside. They were also used much like a hobo’s stick to carry belongings and to use as a walking stick.

During the Han (206 B.C- A.D.220 A.D) and Tang (618 B.C.-907 A.D) Dynasties, Buddhism was very popular. The Han and Tang emperors were all sincere Buddhists. In that era, many weapons were imported from Tibet, which was a stronghold of Buddhism. In the Liang Dynasty (A.D.502-557), priests became more involved with weapons and by the time of the Song Dynasty (960 B.C.-A.D.1280), Shaolin priests were active martial artists perfecting deadly techniques.

To be able to effectively utilize various weapons on different occasions, a martial artist would practice and specialize in at least one long weapon and one short weapon. Because the main principles within each class of weapons are the same, it would be simple for a well-trained martial artist to effectively utilize any weapon instantly. Long weapon training traditionally started with the long rod, whereas short weapon training began with the saber. There is an old saying, “the long rod is the root of all the long weapons and the saber is the pioneer of the short weapons” which implies that the long rod and the saber serve as the foundation for further work within each group of weapons.

In Chinese martial society, it is said: