Are you hitting the target in Karate? | YMAA
Skip to main content
FREE Shipping Order Over $70. (US Only, Conditions apply)    |   Up to 40% Off. Exclusions apply.

Home >> Articles >> Are you hitting the target in Karate? 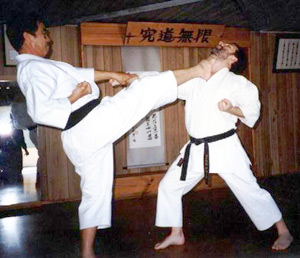 Are you hitting the target in Karate?

There was never a doubt in my head when I lined up to face Kanazawa sensei, I knew he was going to 'plug' me.

Michael Clarke author of The Art of Hojo Undo—Power Training for Traditional Karate wrote an article, Are you Hitting the Target, on his blog. This article was recently translated into Spanish and can be found at the IOGKF Madrid website.

There was never a doubt in my head when I lined up to face Kanazawa sensei, I knew he was going to 'plug' me. But I was confident he wasn't going to hurt me too much, either. Why? Because I knew I was training with someone who had complete control of his body, and better than that, he had the same level of control over his ego too. He had nothing to prove and nothing to lose.

The power of Kanazawa sensei

For me, it was a fantastic experience to face off against a man of such caliber and to try my best to rise to the occasion; and for a while, I was oblivious to everything else going on in the world. There I was, standing in my own dojo facing off against one of the best karateka in the world: what an opportunity! Kanazawa sensei has long been an inspiration, not just to followers of the Shotokan tradition, but anyone who is trying to move beyond the concept of karate training as just a method of fighting.

On this and on other occasions, too, when I had time to sit and talk with him, I learned to look at my karate, and my life, in different ways. Although I have never studied Shotokan karate, I can say Kanazawa sensei has been a teacher to me. One of the things he taught me was to be true to myself and honest in my endeavors, a lesson that was also taught to me by other great sensei over the years. Perhaps it is no coincidence that such men come to a similar conclusion about the importance of ideals like honesty and sincerity over an ability to kick and punch with deadly force and accuracy. Years later, I came across a quote by Michael Angelo that captured my thoughts on why so many miss the point when it comes to karate, and why so few reach the level of Kanazawa sensei. "The problem with man is not that he aims too high and misses, but that he aims too low and hits."