Be Wary of Concussions | YMAA
Skip to main content
FREE Shipping Order Over $70. (US Only, Conditions apply)    |   Up to 40% Off. Exclusions apply.

Home >> Articles >> Be Wary of Concussions 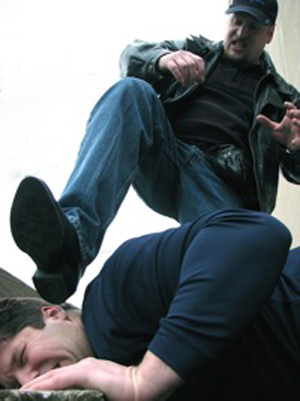 Be Wary of Concussions

There were only two combatants involved, but it took eight of us to break up the fight without hurting anyone, four officers, three security guards, and myself. Once we got the participants separated we began sorting out what happened.

The surly guy was cussing, spitting, and arguing vociferously, but his friend just stood there impassively. The quiet guy was huge, a good head-and-a-half taller than me, but he hadn’t been directly involved in the fight and didn’t appear to be a threat, particularly not with all the authorities around. I wasn’t paying him much mind, when I suddenly realized that his elbow was speeding toward my head. I didn’t have sufficient warning to dodge or block, but I was able to roll with his blow, spin around, and land an uppercut to his side. Just as I felt his floating ribs snap, he seemed to teleport away. Two officers grabbed him from behind and dragged him onto the ground.

In the confusion, no one realized that I’d busted his ribs, least of all him, until some fifteen or twenty minutes later when he was allowed to stand back up to be escorted out of the stadium. I could see him wincing in pain with each step. He took a full power shot to the side that didn’t even slow him down during the altercation. While I only received but a glancing blow to the temple, I suffered headaches, nausea, blurred vision, and ringing in my ears for almost a week. It wasn’t until the symptoms began to ebb that I belatedly realized that I’d had a concussion, my seventh; definitely not a good thing.

Some Symptoms of a Concussion

Virtually everyone I know who has practiced a martial art, be it judo, karate, boxing, wrestling, taekwondo, or anything else, for any length of time has suffered a concussion. So have most football players as recent lawsuits have pointed out. Despite the fact that they’re common, concussions can be serious. Symptoms can include severe headaches, dizziness, nausea, vomiting, ringing in the ears, mismatched pupils (left side dilated more than right or vice versa), seizures, or slurred speech. You may also become restless, agitated, or irritable, or even suffer temporary memory loss. These symptoms may last from hours to weeks, depending on the seriousness of the injury. And, unfortunately, affects can be cumulative.

If you teach or practice a martial art, or simply risk getting smacked upside the head during a fight, it’s important to know a bit about concussions. It’s not appropriate to attempt a diagnosis without proper medical training, yet there are some simple guidelines that you can follow that can give you the best chances of a favorable outcome. Here’s the bottom line: if you or someone you’re with suffers any loss of consciousness or loss of memory from a traumatic head injury, get the victim to a medical professional as quickly as humanly possible. Lesser stuff you might be able to handle yourself.

The brain is extraordinarily delicate though it is protected by a rigid skull and cushioned with cerebrospinal fluid. That’s all good, but trauma to your head can cause your brain to bounce around inside your skull, something which is definitely bad, because it can damage your brain’s function. In general, a blow to the front of the head is less dangerous than one on the side or back of the head, but any severe blow should be taken seriously. Here’s why: resulting swelling or internal bleeding can quickly become life threatening due to space constraints within the skull. If brain tissue swells, you will feel increasingly drowsy and/or confused. If you have difficulty staying awake, experiences persistent vomiting, develop seizures, or lose consciousness, medical attention must be sought immediately. These could be signs of a severe injury.

If you or someone you know may have suffered a Grade 2 or Grade 3 concussion, get medical attention immediately. Dial 9-1-1 (or your local emergency number). There isn’t a lot you can do until medical help arrives, but do look for any changes in the person’s level of consciousness. Your observations can help assure accurate diagnoses and treatment. The victim may need to stay in the hospital for close observation. The standard test to assess post-concussion damage is a computerized tomography (CT) scan. Surgery is not frequently required but may become necessary if swelling persists.

Recovery from traumatic brain injuries can be very slow. Sometimes several days can go by without seeing any major visible change. Post-concussion syndrome can mean that you’ll experience persistent headaches, dizziness, irritability, emotional instability, memory changes, depression, or vision changes. These symptoms may begin weeks or even months after the initial injury. Although these things tend to go away over time, you may still need a rehabilitation specialist to oversee your recovery. Not to be alarmist here, but people who experience severe concussions double their risk of developing epilepsy within the first five years after the injury. There is evidence that people who have had multiple concussions over the course of their lives suffer cumulative neurological damage. There may even be a link between concussions and Alzheimer’s disease.

Rest is generally the best recovery technique since healing a concussion takes time. Avoid sparring, fighting, or strenuous activity until/unless approved by your doctor. For headaches, acetaminophen (Tylenol) or ibuprofen (Motrin) can usually be used, but it is best to avoid aspirin for a few weeks as it can increase the risk of internal bleeding. It is prudent to check with your doctor before taking any medications.