Big Rocks: The Hidden Values of Traditional Karate | YMAA
Skip to main content
FREE Shipping Order Over $70. (US Only, Conditions apply)    |   Up to 40% Off. Exclusions apply. 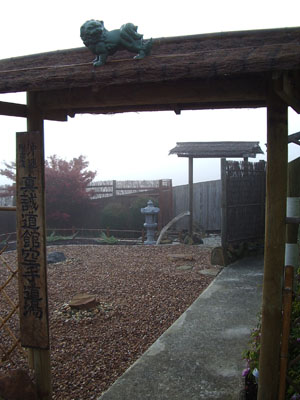 A philosopher and teacher of the ‘Way’ began addressing his students. He produced, from behind a screen, a large glass container and a box of fist-sized rocks. After a few moments of carefully placing the rocks into the glass container, he came to a point where no more would fit. He then turned to his students and asked: “Is it full?”

He then produced a smaller box of pebbles and managed to fit a few more stones into the container.

From a small bucket he began to pour gravel into the spaces between the rocks and pebbles, every now and then shaking the container until no more would go in.

“Probably not!” his students replied.

Out came a cup of the finest sand, and the teacher began to pour. With just a few gentle shakes, he was able to bring the contents of the container to the very brim.

Next came a pitcher of water and with this he allowed the liquid to drip slowly into the container until, in time, the pitcher was empty.

“So,” asked the teacher, “what have you learned today?”

One eager young man jumped to his feet and said, “No matter how full your life is, there’s always room for more.”

“Thank you,” said his teacher, “but that is not the point I was making. What I was trying to show was that you have to get the important things in life, the ‘big rocks’, in place first; otherwise, you will never fit them in.”

What are the ‘big rocks’ in life?

He then asked his students to consider what the ‘big rocks’ in their lives were: wife, husband, children, job, family, friends, health, ambitions, training, being safe, being loved, loving others, and the list ran on and on and varied according to each student.

“Remember,” the teacher said. “If you don’t take the time to put the ‘big rocks’ in place first, you’ll have no space for them, and your life will be full of gravel and sand and all the unimportant things. Let’s face it. When we reach certain points in our lives, we all need to take stock of where we have been and perhaps more importantly, where we are going.”

This is just as important in the study of karate. With any luck we find we are still on track, still heading in the same direction we started on when we first entered the dojo. Nevertheless, to think we can remain on track indefinitely without making some adjustments along the way is, I believe, a mistake.

Those who have been training for more than two decades will understand more than most how difficult it can be at times to maintain direction. From my own experience, I know I have failed, from time to time, to make space for the ‘big rocks’ in my own life. Looking back, I recognize these times as being among my unhappiest. With help from my teachers and friends, I was able to find my way back, empty my life of some of the sand and gravel, and fill the space once more with ‘big rocks’. Although this has never been easily accomplished, I was buoyed by the belief that life was never meant to be easy and that the study of karate was never meant to be easy either.

Back in the early 1980s, I remember sitting on a train as it made its way through northern France. I was with my teacher, Keiji Tomiyama sensei. As I recall, I was doing far too much talking and far too little listening. Tomiyama sensei was, as ever, giving me a lesson, although as usual in those days, I was blissfully ignorant and unaware of it. He let me ramble on about the importance of body posture and how vital it was to have it as perfect as possible. “That,” I remember saying to him, “was the hardest part about learning karate.” He continued to listen to me state my case for some time before he spoke. He agreed that the physical aspects of karate were often difficult to master and were indeed very important. He said: “It’s the mind that really counts.”

Now, I understand he was pointing out one of those ‘big rocks’ in karate, one of those truly important things I should have been paying more attention to. Regrettably, it took a number of years before I learned that particular lesson. Had I been more in tune with my sensei, it may not have taken so long. In budo karate there is the concept of “Isshin-denshin,” which loosely translates as “vibrating at the same frequency as your teacher.” Tomiyama sensei was transmitting a message, but I was tuned to a different channel: the sound of my own voice! So I missed his message and the lesson contained therein. How often this happened I couldn’t say, and I expect such things are still happening between sensei and students the world over.

So the question has to be asked: What are the ‘big rocks’ in life? What are the things we most want for ourselves? These are big questions, but not ones to shy away from or put off until another day. In ancient times it was said that samurai would meditate on their death every day. They did this in order to take away the fear of dying in the hope that when the moment came they could face their final moments with calmness, control, and dignity. Thankfully, we no longer have to think about our deaths with quite so much intensity, but that should not prevent us from thinking of our life and how best to live it. Our attitude toward training reveals something about the kind of person we are, and such insight is invaluable when used to engage life outside the dojo. Even if others fail to notice the lessons you are learning and the changes you are making, you notice them.

The courage to act is important, as thinking alone achieves little. Tomiyama sensei was correct, of course, when he pointed to the importance of the mind in the study of karate. The physical training is, in the long run, only a means to an end. It provides the vehicle by which we cover the ground necessary to travel deep inside ourselves: a truly epic journey.

When I was new to the dojo, I thought the color of a person’s belt marked his progress. Those who wore a black belt held, in my immature eyes, a level of achievement and skill I could only marvel at. When I eventually wore a black belt myself, I marveled at just how little I actually knew. My teachers saw my progress even if I couldn’t, so my faith in them was enough to keep me on track. All I had to do to improve was work harder, get faster, and become stronger, but this way of thinking made no allowance for the natural aging process, nor gave thought to events in my life outside the dojo, events that would affect my karate. So is it possible to improve once the physical techniques have been learned and practiced for many years? And is it possible to get better as we grow older and begin to have less stamina and speed? Yes, but only if we are prepared to remove some of the sand and gravel and replace them with important things: those ‘big rocks’.

Happiness and contentment do not come from outside, they come from within, and it’s the same with karate. Advanced abilities in karate spring from a state of mind that has little to do with physical strength or power, and everything to do with the way we are ‘feeling’. People who understand this not only master their martial art, but also the art of living. I hope one day to stand within reach of the summit such people have climbed. For some time I have strived to put in place the fundamentals, the ‘big rocks.’

I had the good sense to stop wanting more and started enjoying what I had, to treasure those people who enriched my life, and to enjoy my good health while it was there to enjoy. The path of budo karate will not lead to nirvana; it will, however, allow us to take a journey leading to places most will never visit. Sometimes easy and sometimes tough, it is nevertheless a journey worth the making. The journey we embark upon when we enter a dojo may appear to be a purely physical one, but make no mistake, the real ground is covered in the mind.

Someone once asked me for advice on how to make progress in karate. I suggested he first identify what he wanted or expected from his training, and then to do what it took to achieve it. If I were asked the same question today, I think I would give the same answer—except perhaps, I might also tell the story of a teacher, a container, and a pile of ‘big rocks’.

Author’s note: I am not the originator of the Big Rocks story. It’s a universal story to show the important things in life.