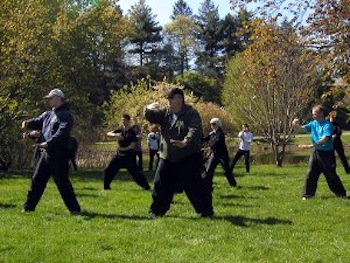 "The doctor of the future will give no medicine, but will interest his patients in the care of the human frame."-Thomas Alva Edison

"The doctor of the future will give no medicine, but will interest his patients in the care of the human frame."—Thomas Alva Edison

World Tai Chi and Qigong Day is a healing wave of positive intention circling the planet on Saturday, April 28, 2012 at 10 a.m. In every time zone around the world—70 countries—people will practice tai chi, qigong and meditation in parks, fields, community centers, or at their local tai chi school. This year marks the 14th anniversary of the day, organized by founder, Bill Douglas, a 2009 Internal Arts Hall of Fame Inductee.

Quietly the day paints a vision of possibilities for humanity each year providing a profound example to millions who participate. The purpose of the day can be summed up in four steps:

Dr. Yang Speaks About The Benefits of Tai Chi

"After many years of practice, research, and experience, I often like saying that tai chi chuan is just like classical music. It is very deep, profound, and endless in knowledge, feeling, and creativity," said Dr. Yang, Jwing-Ming, author of many DVDs in tai chi and qigong. He was recently voted the "Best Author on Tai Chi Chuan" in the 2012 IMOS Journal Reader's Choice Awards.

Dr. Yang says that the internal arts discipline the mind and body. These arts also train sensitivity to qi (energy) and the ability to control and generate qi. "The feeling of internal arts is very unique and rewarding. The only way to experience it is through diligent practice. It keeps evolving into something much more the deeper you get. I enjoy the depth of this feeling very much," he said.

Yang Tai Chi is the most popular tai chi style in the world, and it is practiced by millions of people daily. This low-impact form will help relax the mind and body, improve strength, flexibility, defuse stress, and help promote the healing of many chronic conditions including fibromyalgia and arthritis.